Is there anything wrong with my plate tectonics map? 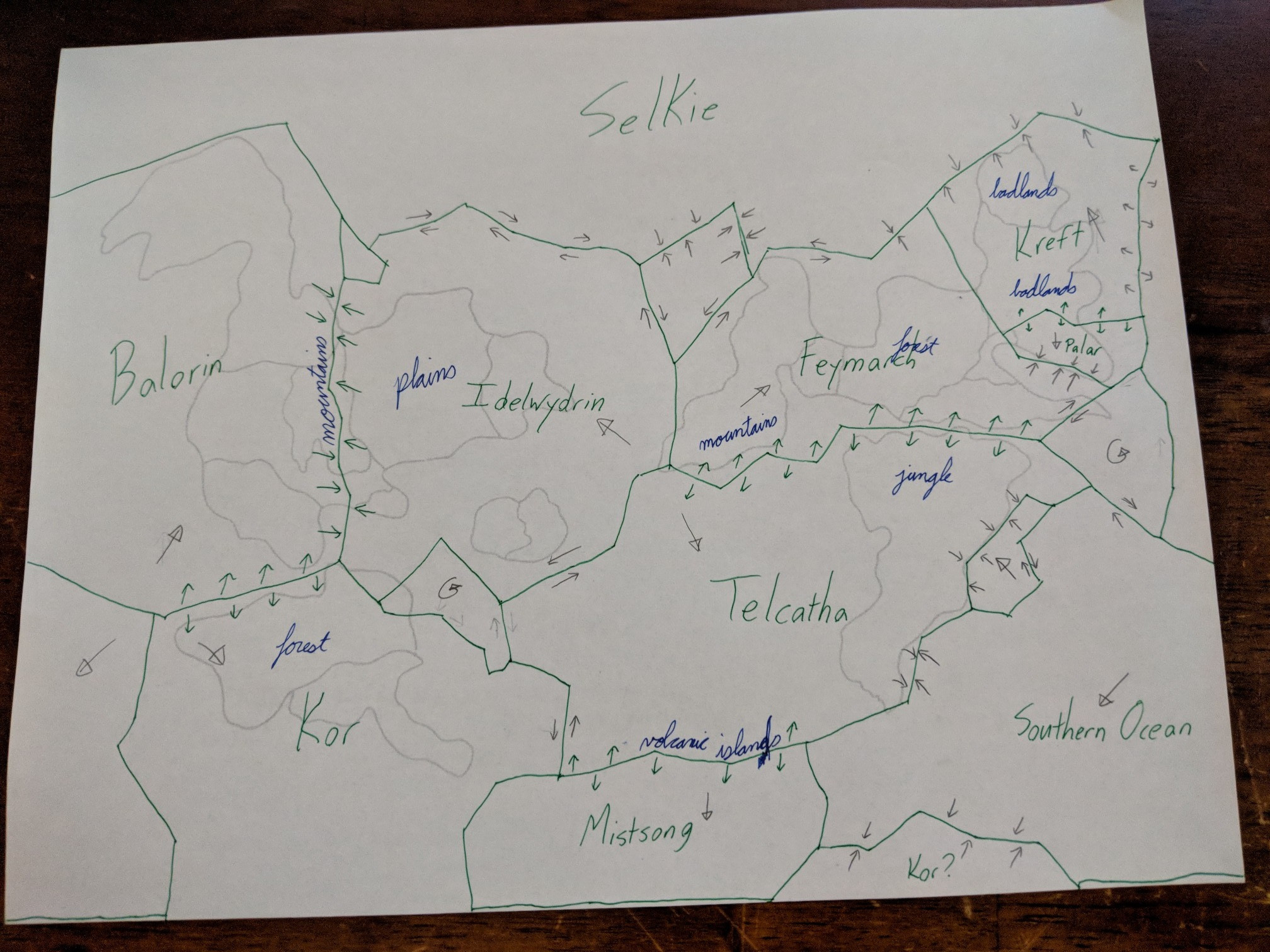 Here is a map I just produced of the plate tectonics of a world I'm working on. Does anyone familiar with the subject see anything wrong with it? If you can differentiate between the penciled and the green arrows, the green ones are set in stone, usually to produce a geological feature I already need for the story. The penciled ones I can change. All the cursive words in blue are geological features that are nonnegotiable and that I need the tectonics to produce. Otherwise, anything is open to change!

Thanks for the help.

Here is another map I've done more recently based on the tectonics map, including lakes, islands, and some physical features. 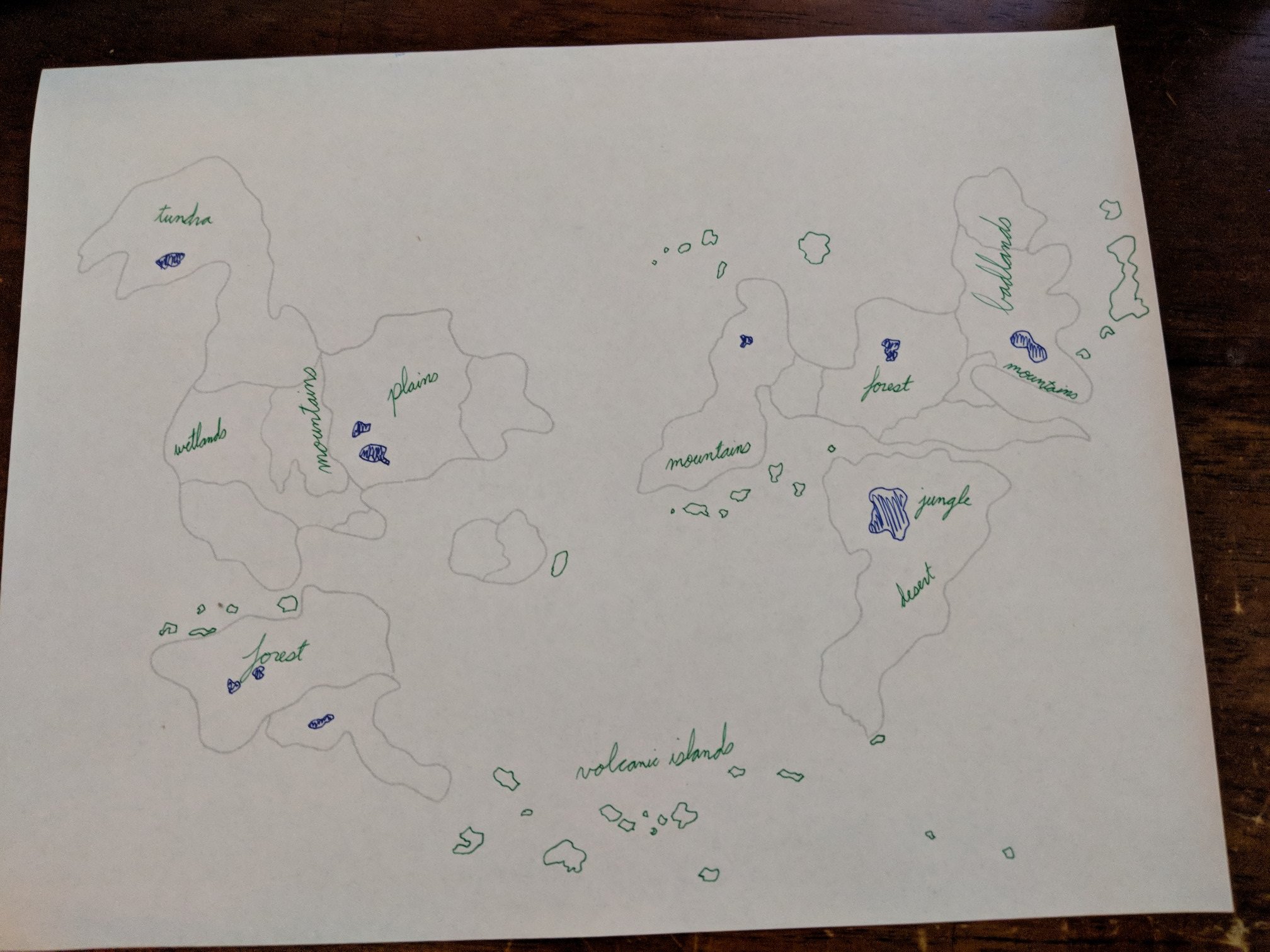 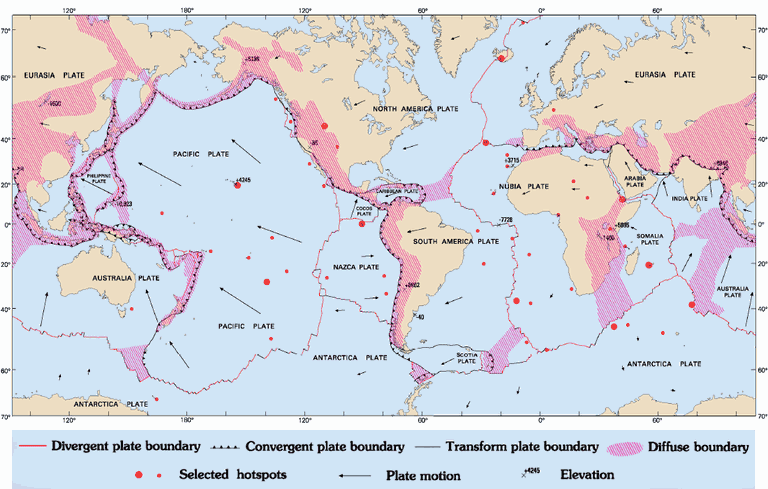 You don't really need them, but they exist and would show you where to put island chains. Also, hotspots on land can produce interesting features such as Mount Kilimanjaro and the Yellowstone geysers.

Not all plate boundaries are 'set in stone.' There tend to be folding zones where collisions happen. The areas labeled 'Diffuse boundary' on the map above shows zones of collistion impact; usually either centered on the line of separation of two plates moving apart (e.g. Africa/Nubia and Somalia plates separating forming the Great Rift Valley) or the folding zones from the most massive collisions. Note the region from North Africa to Iran; this folded region from the collision of Africa and Eurasia and the formed the mountains of the Alpine Orogeny, which themselves erased the former Paratethys sea.

These aren't strictly necessary, but when you have separating plates on land, you should shade an area of volcanic activity as a rift valley forms. If you have colliding plates on land, you should shade a folded zone of high mountains on the slower moving of the two colliders. For example, fast moving India is folding slower moving Eurasia to form the Himalaya; while the fast moving Nazca plate is folding the slower moving South American to form the Andes.

I only nit picked some things since an answer of 'no its good' is pretty boring. But it is good.

First, I'd recommend plugging a jpeg or pdf of your map into GPlates.

It's a pain in the butt, but this will tell you if your maps make sense on a globe. Artefexian explains the process here, starting at 3:04.

He also has a video specifically on how he uses GPlates.

Just off the bat, I have a few questions.

I have to point out the plate called Telcatha on your map. The green arrows along the volcanic island chain and the arrows above the jungle are pointing at each other. Telcatha itself can't be moving north and south at the same time, so is Mistsong just moving south away from Telcatha faster than Telcatha is moving toward it? And if so, why isn't there a convergent fault along Mistsong's southern edge?

How does Balorin relate to Selkie? And is it also a case of For moving south away from Balorin that creates the divergent fault?

Is there a divergent fault between Idelwydrin and Feymarth? Is the a convergent boundary between Feymarth and Kreft?

Not the answer you're looking for? Browse other questions tagged geography geology volcanoes ocean mountains .

3
Is it possible to alter plate tectonics?
11
Determining climate and biomes in a non-planetary setting
3
How can I explain the geography and climate of my planet?
3
Possible for a large enough structure to survive plate tectonics?
6
Advice on accuracy of world map
5
What needs to be changed about the plate tectonics of my world?
2
Are my plate tectonics/land masses realistic?
3
Any advice on what is a realistic way to use plate tectonics to create landmasses and barriers?