Can space debris be used as a heat sink for re-entry?

In the world I'm building, a nuclear war and subsequent repressive chaos have led all satellites to be destroyed by the powers that be, around 10 years from now. A few years later, a small spacecraft, which doesn't have a heat resistant cover to allow it to enter the atmosphere, reaches Earth orbit and proceeds to gather space debris. Of course, with all the destroyed satellites, it has a lot of material, and it has a laser which it can use to change its course. It may also have other things but it has come from Mars so would need to have either made it there or have reused or re-purposed man made materials there.

Also it can use solar power to recharge said laser and keep things going as it floats along. It has as much time as is needed as the solar power can keep it going almost indefinitely. So the questions are: How much space debris would I have to collect, and how would I collect it, so that I'd have enough cover around my space ship to leave orbit without burning up, and so I can use my last bit of fuel to attempt a descent? Would this resulting debris cause a lot of havoc once I detached it from my ship before landing?

The problem you are trying to solve is similar to the one asked here: what is the minimum size of an asteroid so that it impact Earth?

In your case you don't want to impact, but you want to go through the atmosphere with no damages, which is the same for the sake of your question.

Based on approximating the problem by assuming that the matter in the path of the object is being pushed at the same velocity of the object, so as soon as the object has swiped out path containing the same mass as its own mass, it will have lost all of its initial momentum. All its kinetic energy will then have dissipated there, so if this happens in the atmosphere it will have burned up before reaching the ground.

This is, of course, a gross oversimplification, but it will yield correct order of magnitude estimates. We can then calculate the critical diameter as follows. The mass of the atmosphere per unit area equals the atmospheric pressure at sea level divided by the gravitational acceleration, so this is about $10^4\ \ kg/m^2$. If an asteroid of diameter $D$ and density $ρ$ is to penetrate the atmosphere, it's mass of $1/6πρD^3$ should be larger than the mass of the atmosphere it will encounter on its way to the ground, which is $5π10^3D^2\ \ kg/m^2$. Therefore:

The correct answer is mentioned in a NASA article, which states

Space rocks smaller than about $25\ \ m$ (about 82 feet) will most likely burn up as they enter the Earth's atmosphere and cause little or no damage.

This will protect the ship from the ablation damage of the reentry. Getting insulation from the resulting tremendous heat will be another story (aluminum and other metal are good heat conductors...)

(but with a little caveat)

Space junk is, well, junk. It's essentially just the contents of some factory's dumpster. Most of it is very small, and the stuff that isn't very small is not designed for this purpose. Making matters worse, it sounds like your satellite is not designed for reentry. This means that it's not made for structural integrity. Or really anything besides sitting in microgravity. Even if you manage to collect a large cloud of space junk around you, how do you make it stay around you? The small stuff is going to have much less momentum and will fall behind you as soon as you hit the atmosphere. The large stuff has too much momentum, and any shifts in the junk heap will likely destroy your craft.

Even putting aside the ability to keep the junk steady, reentry is a chaotic procedure, only made less so by careful geometry in our reentry capsules. There is almost zero chance that you don't end up tumbling throughout reentry and destroying your satellite. If you do make a stable shape, it's probably stable in the wrong direction and you'll end up burning your satellite.

Finally, the engines on satellites are made for long, slow, efficient burns. Even if you manage to do everything right up until landing, that engine will do little besides lower your terminal velocity from, say 200 kph to 199 kph.

But you said there was a caveat!

Okay, so this satellite went to Mars. Let's say that it has a more powerful engine for some reason (it really wouldn't, but let's roll with it). In addition, it has devices that are purpose built for grabbing and trapping space junk around the craft. Moreover, it can retract its solar panels so that they don't get snapped during reentry. And finally, there is some really really perfect space junk out there. Like your space junk grabber was designed to grab these exact pieces of space junk. Then yes, in this miracle of coincidences, you could potentially ride this space junk heap down to the surface, and maybe, maybe survive it. I just don't buy it. 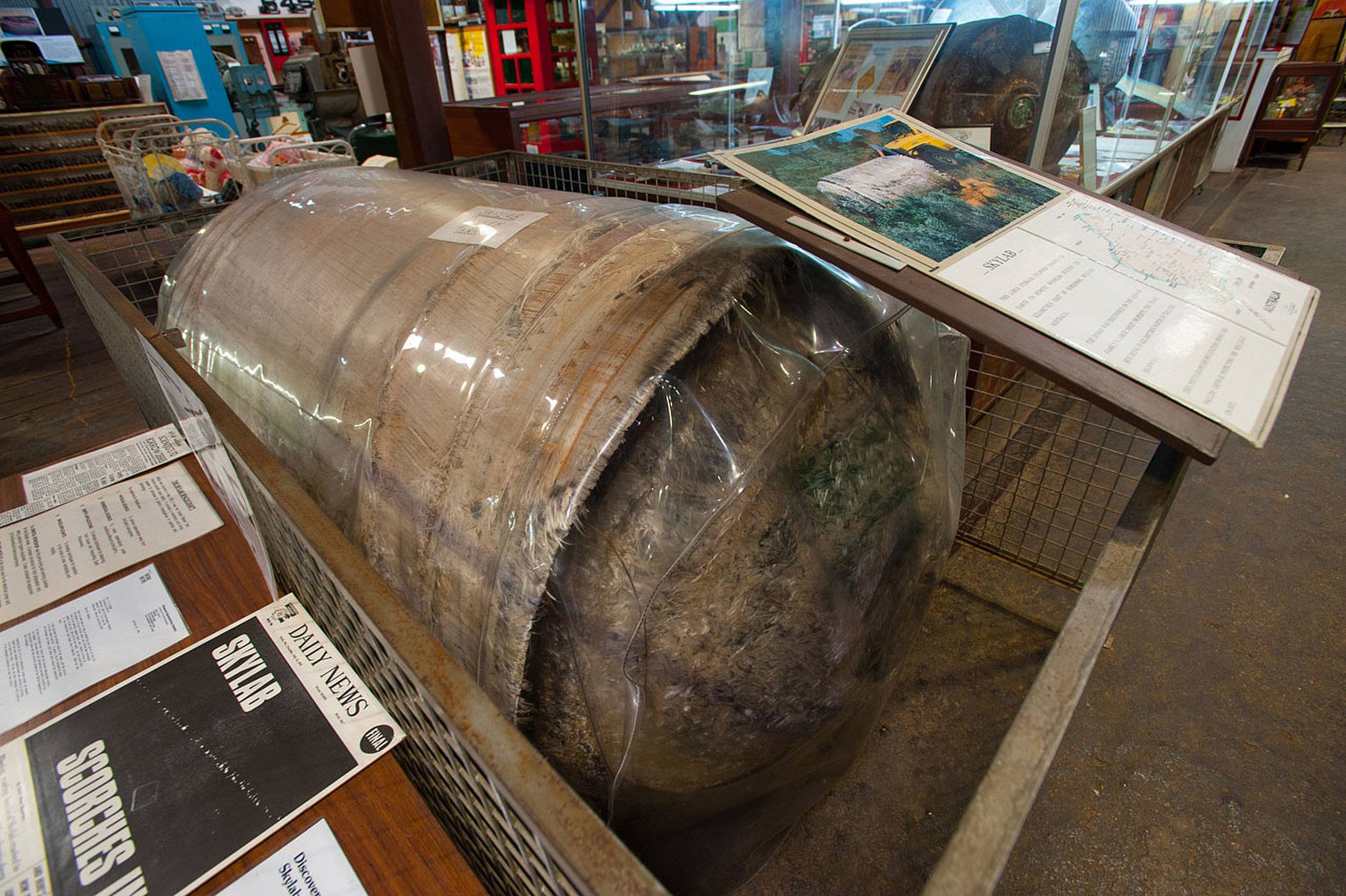 Depicted: a 1 ton oxygen tank from Skylab which survived re-entry and looks pretty good here in its museum.

I assert that if this bug chunk survived re-entry, you could survive re-entry behind it. It would be your heat shield.

The trick would be finding chunks this big still in orbit. I think people are more careful about this sort of thing now than they were when Skylab went up.

But maybe big stuff still does go up, just with explosives or other means to break it up before re-entry. Or you could make it so in your world. If there were a space arms race maybe there would be proton cannons or other space weapons platforms up there. Maybe some stuff already has heat shields you could scavenge - consider if you were going to fire a missile down from orbit it would need to survive re-entry. A phalanx of missile heads would make a badass MacGyvered heat shield.

My question for the comments - if during the OP's endeavor you found a full Skylab oxygen tank, would it be better to drain the oxygen into space before using it as a heat shield, or leave it full?

Not the answer you're looking for? Browse other questions tagged spaceships orbital-mechanics mars satellites space-debris or ask your own question.

23
How can I prevent Kessler Syndrome among space stations?
8
Boats from space in planetary invasion
12
Is there actually a way to create total orbital denial?
9
How to Effectively Collect and Recycle Space Junk?
9
Satellite salvaging: safely de-orbit and retrieve spacecraft or other objects
61
My perfect evil overlord plan... or is it?
32
How can solar sailed ships be protected from space debris?
4
Precise localization of another ship in a Orbit-to-Orbit scenario
7
How best to arrange a network of light-focusing satellites closely orbiting the sun