Is it possible to make pulleys and cams required for compound crossbows with medieval or early renaissance technology? [duplicate]

I am thinking if it's possible for craftsmen of late medieval times to achieve precision required to repeatedly make crossbows enhanced by use of cams or pulleys. As far as I know, pulleys were used in medieval societies quite often, but I don't think they were made in sizes approaching the ones required for compound crossbows.

But, assuming medieval military engineers figured out putting pulleys on ballistas or crossbows would bring some advantage and then found some skilled craftsmen to build parts and find good materials for it, would it be plausible?

Edit to address duplicate votes:
It's true that my question is really similar to this one: Rambo style compound bows, feasible with renaissance tech-level? but I believe this earlier thread was a bit more about a compound bow specifically (with features like detachable arms) and I think that answers provided under my question give some new information and thoughts on the topic.

The closest analogues to what you describe are the Ballista (torsion catapults) of ancient antiquity. While not using pulleys and cams the way modern compound bows do, they were amazingly intricate mechanisms which could shoot javelins or large rocks hundreds of metres, and certainly not to be trifled with. 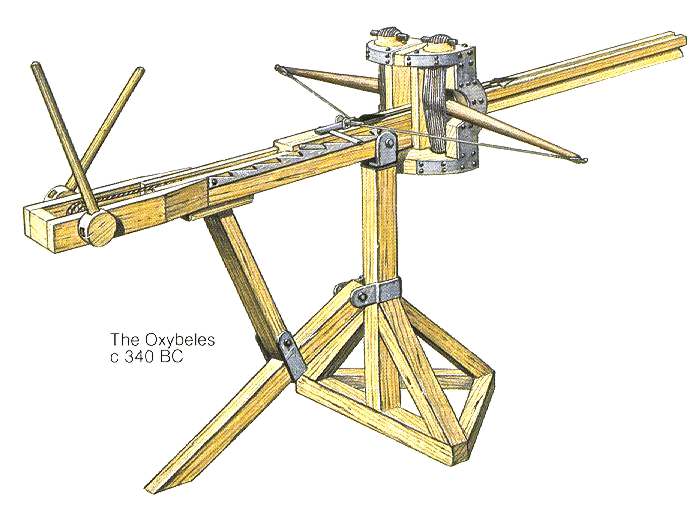 Indeed, in Roman times, the technology had become so standardized that the Legions had a man portable device known as a "Scorpion", which served a similar purpose to crew served weapons in a modern army. 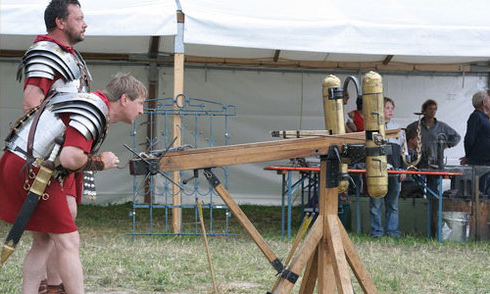 Reproduction of a Roman Scorpion

Looking at this, you may wonder why Scorpions and Ballista disappeared before the end of the classical period, and the answer is brutally simple: cost. The materials used to make Ballista and Scorpions would have to be of high quality to withstand the stresses of the torsion springs, but more importantly, a highly trained Ingenium was needed to do the calculations to ensure the torsion springs were tensioned correctly and all the parts were properly assembled. As the resources to maintain this pool of skilled workers declined, the ability to build and use Ballista and Scorpions faded as well.

This leads to why compound bows were not invented in Antiquity, the Middle Ages or in fact until the 1960's. Bows were a very highly developed technology already, with literally tens of thousands of years of development behind them, and specialized bowyers who knew the craft of making them. The principles of mechanical advantage were also well known from ancient times, but the sorts of people who used pulleys (sailors, construction workers) were generally not involved in combat. Interestingly, the two were combined in the late Middle Ages and early Renaissance with the introduction of "spanning" devices to draw heavy steel bows. 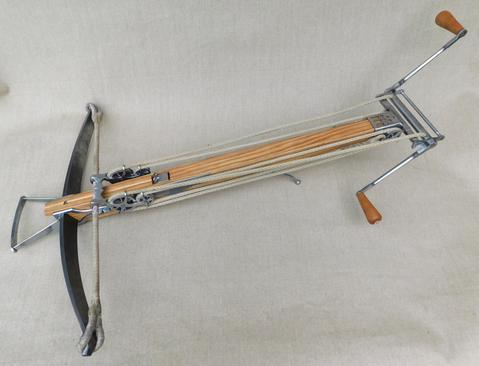 And this explains exactly why compound bows were not invented until the 1960's. A steel bow with a windlass spanner could have a draw weight of up to 1200 lbs, providing more than enough energy to propel a quarrel capable of killing or injuring an armoured man. Both the bow and the windlass were relatively inexpensive, and were simply extensions of existing arts. No highly trained engineers would be needed to set up the bow, or make the adjustments needed to maximize the energy delivered, and both the bow and spanner would be relatively simple to repair in the field by currently trained bowyers and engineers.

So the issue isn't that people were not "smart" enough to invent compound bows, there simply was no need for compound bows in that period, since existing equipment could be made, maintained and used by people with existing skillsets, and was quite capable of doing the jobs demanded of them. Extra costs will always be ruthlessly pared away, and the cheapest, most capable pieces of equipment will generally be what you will be using.

Hero of Alexandria illustrated examples of cranes using early block and tackle systems, so the concept and technology certainly existed.

You could simply bolt a chunk of metal on the tips, but that means you lose all the flexibility of the tips and that's no small thing. You could gain some of it back by making longer limbs, but one of the bonuses for crossbows is their compact design.

However, you need to remember that compound bows are NOT stronger. The pulleys make them easier to draw, nothing more. Crossbow solved that problem with levers and cranks which often had the advantage of automatically notching the string. It's altogether likely that adding pulleys to the mix wouldn't add substantially to the drawing process and the technical drawbacks, in my opinion, make this a net negative.

Answer: Yes, they could do it. No, it's likely not valuable.

While Thucydides and JBH have focused on the weapon, I will focus on the ammo.

Bows work by transfering the energy stored in the bent arms or pulley/cam system onto the arrow. The arrow then gets accelerated from its still position to bat out of hell in very little time. If you see them in slow motion, you will see that in most kinds of bows (all non-compound, and some compound ones) the arrows bend while in flight. The more energy you give it, the greater the bending.

Wikipedia has the following to say about arrows for compound bows:

Arrows used with compound bows do not differ significantly from those used with recurve bows, being typically either aluminum alloy, carbon fiber, or a composite of the two materials. Wooden arrows are not commonly used on compound bows because of their fragility. Most arrows in use today are of the carbon fiber variety. (...)

Another important consideration is that the IBO (International Bowhunter Organization) recommends at least 5 grains of total arrow weight per pound of draw weight as a safety buffer. This means a bow that draws 60 lb would need at least a 300 grain finished-with-tip arrow. Shooting arrows lighter than this guideline risks damage to the bow similar to that caused by dry-firing, which can in turn cause injury to the archer or anyone standing nearby. Shooting arrows that are too light also voids most manufacturer warranties.

Look at the ammo used by the roman scorpion. Those things look more like javelins or spears than arrows. If an archer were to use a medieval compound bow, the arrows would have to be made of steel. But arrows need to be mass-produced in ever greater quantities than melee weapons to make sense in a war - it would be too wasteful. Besides, whenever you did not massacrate your enemy, you would be giving them free steel for them to recycle into new weapons.

If a single archer were to use such a bow, they would have a hard time either producing or finding the arrows that would not break upon being fired.

That is not to say that you couldn't have a compound bow in the antiquities. If you do a quick search on youtube you will find plenty of videos teaching you how to build a compound with wood or PVC. They will shoot reguar arrows... It's just that they are not as strong and precise as a proper sports/professional compound bow, so there would be no advantage to using them in an antiquity setting. You would just be adding more upkeep costs to an already high maintenance weapon.

Yes, the ability to create shapes with enough precision for a compound bow existed. As a matter of fact, it already existed long before that. What did NOT exist however: the material science. We just did not have the materials needed to make an effective and reliable compund bow.

Not the answer you're looking for? Browse other questions tagged technology warfare weapons medieval materials or ask your own question.

6
Anachronistic things built with medieval technology
3
Modern facilities with medieval technology?
7
Rambo style compound bows, feasible with renaissance tech-level?
6
What Limitations or Modifications Would Medieval Armor or Weapons Have if Modern Quality Steel Were Used?
4
Arquebus muzzle velocity, and how to balance it with bows and crossbows
5
Would building a large underwater dome be possible with European Renaissance technology?
12
Is it possible to build an escalator without iron, with 16th century technology?