How would age change when crossing into an alternate universe? [closed]

For a project I'm working on, a pair of "immortal" characters end up crossing from their dimension (a fantasy world) into what could be described as the "real" world, and I'm considering aging them back a bit when it happens. (Think "The Devil is a Part Timer" for that.) This would be because the 2 dimensions' timelines are moving at different speeds, instead of them being completely parallel. For example, Point A could be where they converge and are close enough to parallel that a portal could be opened and characters could cross over, while Point B could be 5 years later in one dimension and 50 years later in the other.

The characters are half vampire, so they'd age extremely slowly after reaching maturity, but they can still die under the right circumstances. For the story, I want to have them revert back to just before reaching maturity as humans when they cross into the other dimension. I'm trying to decide what would happen if they brought a human back with them into the fantasy dimension. I could explain some bits and pieces with the fact that there's no magic in the "real" world, but I feel like it would need something a bit extra to it.

Would the human age forward? Would they stay the same? Would they become a demi-god of some sort because 5 years for them is 50 years in the new dimension they're in?

Edit: looks like a lot of confusion is as to why their ages would be rolled back and I'm gonna chalk that up to them having magic in their blood or something and the other dimension they're entering having no magic, therefore their magic would've been removed upon entering the portal. The age change wouldn't be severe, it would probably be 5 year difference in appearance, or Something like that. 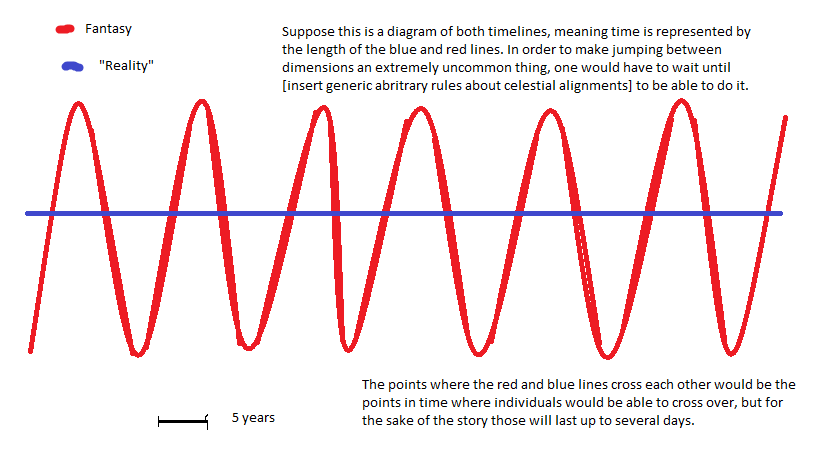 If you want the characters to age or de-age, then it is purely fantasy under most circumstances.

People age based on the time that they have experienced. If I have been raised in universe A where time travels (for me) normally, and then I visit universe B where time travels 50 times faster, nothing should happen to me upon my entrance to B (assuming that I survive - I expect the time difference might cause problems with the gateway, but that can be handwaved away in a fantasy). Then I spend one year in universe B (at my subjective time) and then go back to A.

Now it is 50 years later in A, but I am only one year older. And this was gained through the normal one-second-per-second aging rules.

For the story, I want to have them revert back to just before reaching maturity as humans when they cross into the other dimension.

This is even worse. You are having character go back in age. The only way this makes even a little sense to me is if they truly go back to that age. This means that they have no memories of anything beyond their younger days and don't realize anything has happened because for them it hasn't.

In other words, why should their bodies be extremely selectively changed merely because they've go to a universe with a different rate of time?

from the description time in the two dimensions is passing at different rates. Time is passing ten times in one dimension compared to the other. However, this should have not effect whatsoever on their ages or rates of ageing when they pass from one dimension to another.

It seems as if you have assumed that a person in one timeline will be aged as they pass from one dimension to another to somehow compensate the time differences between the timelines. There is a no scientific or logical basis for this happening. The way it could happen is if there is a magical property that operates, independently of the actual passage of time, but causes the characters' ages to be 'adjusted' to the time in the dimension they travelled to.

Also, if the character spends another year in the slow dimension when they return to the fast timeline they will revert to their old age plus additional ten years. One year in slow being the equivalent of ten years in the fast dimension.

But, remember this age adjusting only works by magic.

Not the answer you're looking for? Browse other questions tagged magic time-travel or ask your own question.