How do vampires react to passive UV light sources?

Certain fantasy creatures are extremely sensitive to concentrated UV light. eg modern vampires. They either slowly or rapidly burn up in-front of you when exposed to direct sunlight or modern high techy UV-lightsources.

I am trying to figure out if these creatures sensitivity to UV could be used as a method of passively identifying them, in situations where they are not exposed or burning. Essentially, when not exposed to direct sunlight, do vampire bodies absorb/reflect UV differently to a human; which could then be detectable by modern science?

If my near-future military designed something similar to our current-day night vision goggles, they could then be adjusted to work for vampires. If I hand certain characters specialist goggles capable of viewing the UV spectrum, would these vampires jump out of the crowds as either noticeably more reflective bright points or absorptive blackholes? Without actually exposing the vampires to an active Blacklight. Or would they look the same as a typical human until exposed and then they would light up on the thermal infra-red spectrum? 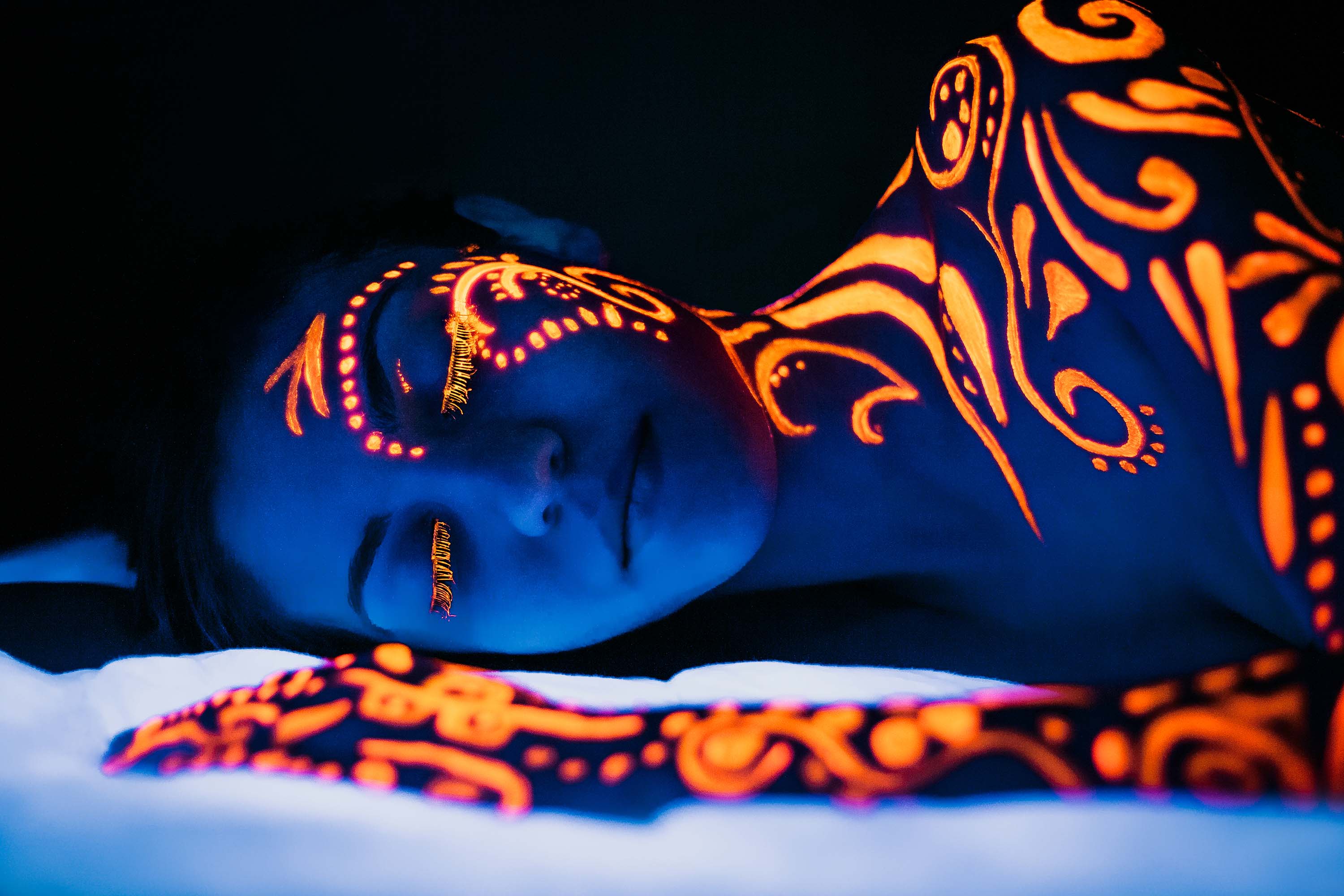 Image of a human artist with phosphorescent bodypaint under a blacklight...She is not a vampire. image source

creature-design near-future light vampires vision
Share
Improve this question
edited May 2 '18 at 19:38
EveryBitHelps
asked May 1 '18 at 19:29

So we can actually use science to help us out with this fantasy concept, believe it or not. This is what I mean: vamipirism was initially inspired by a variety of illnesses, most notably a genetic blood disease (erythropoietic protoporphyria). Individuals with this disease are sensitive to light because MORE UV is being absorbed in to the skin, hence causing more damage. This is due to the accumulation of protoporphyrin in the skin, so what you can do is have vampires possess an accumulation of a certain molecule in the skin that absorbs UV light rather than refracts it.

Vampires are fictional creatures. In the stories I have read some are sensitive to garlic, some to holy water (and were mocked by non christian influenced vampires for this), some to light, some to silver, some to wooden stakes.

To cut it short: it is your story, you are free to set up any reaction to UV light that suits your plot needs.

By the way, being non living creatures they would be "cold", so IR vision would not spot them from the background as it does with living beings.

If homo inimicus vampirus were real, and were so radically sensitive to UV light as proposed, and if that were similar to the issues porphyriacs suffer due to excessive epidermal protoporphyrin, they would indeed appear significantly darker than homo sapiens when seen in UV light: moreover, you'd not need a strong UV source to show this effect assuming reasonable active signal processing in your nightstalker-vision goggles. More than likely there would be a visible mottling similar to advanced age sunspots, or possibly to the pattern of veins in the skin, showing areas of greater protoporphyrin density, which would also be visibly different than homo sapiens.

But bear in mind human skin already absorbs a whacking lot of UV, hence both the dark look of the model in the photo you posted and our need for sunscreen.

They also wouldn't necessarily be instantly aware of UV impingement if the level of UV light were low - IRL I knew a porpheriac who had a severe breakdown due to excessive light and temperature exposure, and it was not by any means an instant affair: she was exposed, and over several days was more exposed (all her choices) and during this became more and more irrational and irritable, resulting in a fugue state and obsessive behaviour, which then gave way to high risk / gambling behaviours, the consequences of which precipitated a divorce, and not long after this a complete breakdown and suicide. She experienced pain, fear, anger and severe irritability starting some hours after the exposure began.

You could choose to parse that in your fiction as giving rise to a supernaturally strong fight-or-flight cortisol / adrenaline response to major UV exposure, with pain/fear/anger, and that might add far more verisimilitude than the typical "burst into magical flames and ash out instantly" treatment.

Seeing as the UV-light is something that is invisible to our naked eye and can't be seen because we haven't adapted to it, using goggles that pick it up would be a good idea. (erythropoietic protoporphyria) is a disease as said above, that causes our skin to absorb more UV-light than usual, if this is the case the goggles would not be able to pick up UV-light on vampires because they would be absorbing it more. If you see a square that is red, that's because it absorbed every color except red in the visible part of the light's spectrum. I would imagine that when your character looks through these glasses ordinary people would be visible but vampires would very little, or completely invisible.

Basically your character suspects someone is a vampire in a crowd of people.They put on the goggles, and if they can see everyone in that crowd except the person they are suspecting, that person is indeed a vampire.

(I'm not an expert and any experts are free to correct me if I'm wrong.)

Keep in mind if you add science to your story, you would have to explain how different stages of darkness affect your vampires. For example if they are in shade, but the place is still visible to the naked eye, light is reflected to that position (it's just less intense). That means that the UV-light is reflected there aswell. Will this make your vampires weaker, or will they burn but at a slower pace? If you're making the case that UV-light hurts your vampires this is something you should keep in mind. The only place were they would be safe is in a place with no or very little contact with sunlight.

Not the answer you're looking for? Browse other questions tagged creature-design near-future light vampires vision or ask your own question.

59
Why is this creature afraid of water but not of body or plant fluids?
8
How can vampire-dad be popular when he has to stay inside during the day?
3
Vampires in space
4
Would living on around Alpha Centauri change how our eyes see color?
5
A sound reason for vampires to be weak to sunlight?
6
How Can Vampires Obtain Donors?
32
How can my town be public knowledge while still keeping outsiders out?
33
What justification can I give for why my vampires sleep specifically in coffins?
2
Hiding Vampires In Plain Sight