What are the most common influences on art in a certain period?

E.g., what made realism so popular in the time that it was active? I know that the goal of it was to show the lower casts of the society and how they lived, but why was it popular at the time? How does the culture influence the art? I would appreciate some examples. I'm particularly interested in what kind of art style would be present in a period of time where nobles are trying hard to put a divide between themselves and lower casts (classes) of society.

(I do have a background in art theory, but I am not an expert in the field.)

Also, this is my first question, so if I did something wrong, please don't be mad.

The world my characters are living in currently is at least partly feudal. I am mostly interested in figurative art and how it would be affected, particularly paintings and statues. The nobles have existed for quite some time, not always having the same influence on the state of the country. In the period the book is set in they have been fighting for some time to keep the magic away from anyone else. This includes 6 rich families, that have gotten to be in the good graces of the ruler of the country. (keep in mind that there are also noble families that have been recognized by the ruler and they serve as vassals to the bigger royal families, but they do not have access to the magic that the Noble families have.) 200 hundred years ago there were guilds that formed that allowed anyone rich enough to practice magic with this came taxes for the noble families that were no longer in a priviliged state that they once inhabited. This was all caused by the ruler of that time wanting to create power in the country. The nobles fought to stop this and through unspecified circumstances they have. The thing is every part of the country is under rule by one of these royal families. And the ruler is not particulary thrilled to make any of them their enemies. So they have went along with this for some time. Currently they aren't paying taxes they marry among themselves and if one of their vassals is shown worthy they will marry one of their daughters to them, but the men from the vassal family will take the woman's name and live with them. Artists generally can come from anywhere, they just need to have a proper education from a recognized master to be successful. They generaly come from noble born families that have the money to pay for the education. They are treated with respect from the nobles and commonfolk alike, but they don't necessarily need to be part of either one. Also anyone who has enough money can buy a sculpture or a painting.

The reason why my question was very bare-bones and not directly related to my story is, I wanted to know what most often affects art (figurative) to decide for myself what paintings and sculptures will depict in my story and what will affect them.(Also I have not completely built the culture yet, so some things I couldn't explain.)

Since this question will probably devolve into a discussion rather than a clear-cut answer, it might be best if examples from history were used rather than theoretical ideas. (Answers to: Why the baroque period was so dark with only a single source of light, or why rococo depicted mostly nobles in their day to day activities etc.)

We commonly speak of the Classical Greco-Roman civilization as if it was uniform. And in many ways, it was; ideas travelled freely, artists (and works of art) travelled freely, and they sort of look similar. But they are not the same; it is a common observation that in the Greek-speaking east, art tended to idealize the subjects, whereas the Latin-speaking west it tended to show them as individual humans. 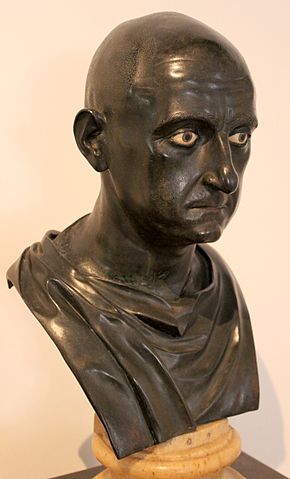 Two great generals. On the left, an Ancient Greek herm of Themistocles. On the right, a 1st century BCE Roman bust of Scipio Africanus. Note the vastly different treatment; the Greeks showed the Greek general with ideal manly traits, exuding an air of serenity and calm determination; the Romans showed the Roman general as a real flawed man, pursing his lips in an attitude of stubborn obstinacy. Pictures from Wikimedia. 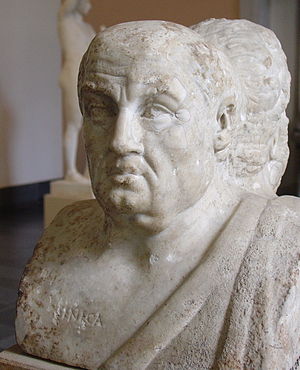 Two great philosophers. On the left, the Greek Aristotle; Roman copy in marble of a Greek bronze by Lyssipus. On the right, the Roman Seneca. Compare the god-like father of logic with the fat, old, wrinkled Roman ethicist. Pictures from Wikimedia. 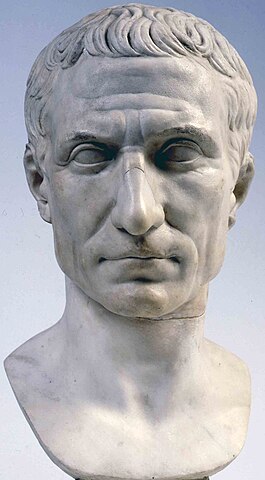 Two great statesmen. On the left, the Athenian Pericles; Roman copy of a Greek original. On the right, the one and only C. Julius Caesar. Note how the Athenian demagogue is shown in military glory, whereas the Roman conqueror is shown as a civilian and with asymmetric traits. Pictures from Wikimedia.

In general, it is widely known that Roman portaiture was intensely realistic -- they did actually show the warts on the faces of great men, they showed them wrinkled and fat and bald! Now, the Romans did actually like Greek statues, very much, and paid handsomely for faithful copies of Greek statues. We have many such copies; so we know that Roman sculptors could imitate the serene ideal figures favored in Greek statuary. But for their own domestic productions, they didn't; even when creating artworks for blatant propaganda they did not completely tranform their subjects into divine beings. Compare the treatment of Alexander the Great and Trajan:

Two propagandistic statues of emperors. On the left, Alexander the Great. On the right, Trajan. Alexander is shown as a demigod, his humanity almost completely effaced. Trajan is a ruler, shown with his own less than perfect likeness. Pictures from Wikimedia.

The easiest explanation is to lean on the "national character". The idealistic, poetically minded Greeks idealized their subjects, the pragmatic self-confident Romans tended to show the individuality of each subject. If used for anything more than fluff, this runs into deep problems, not the least of which is that it is almost racist. (And anyway, in the antiquity it was the Greeks who were perceived as sharp negotiators who eagerly resorted to shady business practices.) The musically inclined easy living Italians liked to show their subjects as beautiful and carefree, whereas the hard working Flemish and German artists put a lot of effort in the details and found joy in depicting the reality of life. And so on.

Another easy explanation is to resort to the "spirit of the times". In tranquil times art tends more towards idealism, in more turbulent times realist individuality prevails. Except that this bunk; Pieter Bruegel the Elder (died 1569) and Michelangelo (died 1564) were contemporaries (although the Dutchman was much younger): 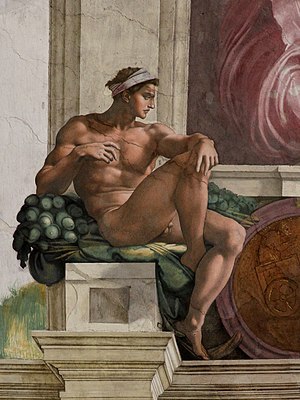 Two artists active in different countries during first half of the 16th century, a.k.a. High Renaissance. On the left, a detail from Pieter Bruegel the Elder's Nederlandish Proverbs; on the right, an ignudo from Michelangelo's magnificent Sistine Chapel ceiling. Pictures from Wikimedia.

Ah, and whose style is more realistic? Is it Michelangelo's, whose figures are always anatomically correct, albeit idealized, or is it Bruegel's, whose composition and attitudes are definitely faithfully exaggerated slices of reality, but whose figures are almost always somewhat cartoonish? What is realism, really?

For an even more striking example, consider the Pre-raphaelite movement which flourished in the United Kingdom in the second half of the 19th century. One would be hard pressed to find any little hint that those paintings were created while the country was busy with the second industrial revolution and was putting a lot of effort into conquering half the world.

The Hireling Shepherd, by William Holman Hunt. This wholesome no fat no sugar painting was created in 1851. What British Empire? What industrial revolution? What Australian gold rush? Look see a handsome English shepherd putting the moves on a rather doubtful beautiful and barefoot English shepherdess. Don't forget to note the cute lamb. Picture from Wikimedia.

The real explanation is that this is simply how it is; artistic styles are invented at some time and place, are widely imitated, and then they eventually evolve into a new style or go out of fashion. Thomas of Aquino nailed it when he gave his famous definition of beauty: "pulchra sunt quae visa placent", beauty is what is pleasant to look at. There really is nothing more. Some artist invents something new; some people find it pleasant to look at; other artists copy the technique or the style; lots of art is made in that style; and then some other artist invents something new, or revives something old, and some people find it pleasant to look at...

As a secondary aspect, let's not forget the power of entrenched interests. Once a particular style begins to be taught in schools, it gathers a lot of momentum from the sheer mass of vested interests. 19th century European painting was dominated by the trans-national (and mostly lifeless) academic style because that was what Academies of Art taught, that was what was shown, that was what received prizes, that was what was commissioned by bureaucrats to adorn their bureaucratic dens of state. Remember the scandal of the Salon des Refusés of 1863, where Gustave Courbet, Édouard Manet, and Camille Pissarro exhibited their decidely non-academic works! (Including the boundary-breaking Déjeuner sur l'herbe, which the prudish official Salon had refused as immoral despite its impeccable pedigree.)

All motivations are individual (or economic)

So how does a style become dominant in a culture, be it limited in time and space?

Too complicated to describe

Most simply, art is created by an individual or small group of individuals as a result of their interactions and history with their environment. Modern artists are often asked about their influences to which they sometimes respond with "Oh, such-and-such and so-and-so artists were my inspiration. I just loved how they added rando-flourish to their work." Regardless of whether they are asked, all artists have influences.

Many of these influences have significant illegible components that cannot be described in words, only perceived. Since the minds of artists will use much more than the legible information of a style or environment, we can't make any assumptions about what will be incorporated and what info will be discarded.

If all environmental information and the configuration of an artist's mind were legible, we would have a better chance of predicting what art styles would become popular next. Sadly, this is not the case. Written or verbal descriptions of an art style can only carry so much info.

There's also a significant random selection process in what art goes mainstream and what doesn't. Stories abound of when an artist happened to meet the right person at the right time and was catapulted to fame. We have no way of predicting these random interactions.

Some art movements are protests to prevailing conditions. Others are propaganda to reinforce existing political regimes.

Not the answer you're looking for? Browse other questions tagged society culture or ask your own question.

11
How could a monarch rule in a vast, isolated, medieval city
2
Life imitating art - slow-motion
15
Is a medieval country of artists viable?
7
How fast can a society be 'upgraded'?
15
Would magic cause a medieval society to stagnate rather than progress technologically?
0
Is a nation with a King that acts on the behalf of the true ruler more politically unstable?
39
How many generations would it take until the noble and peasant classes become different species and cannot interbreed?