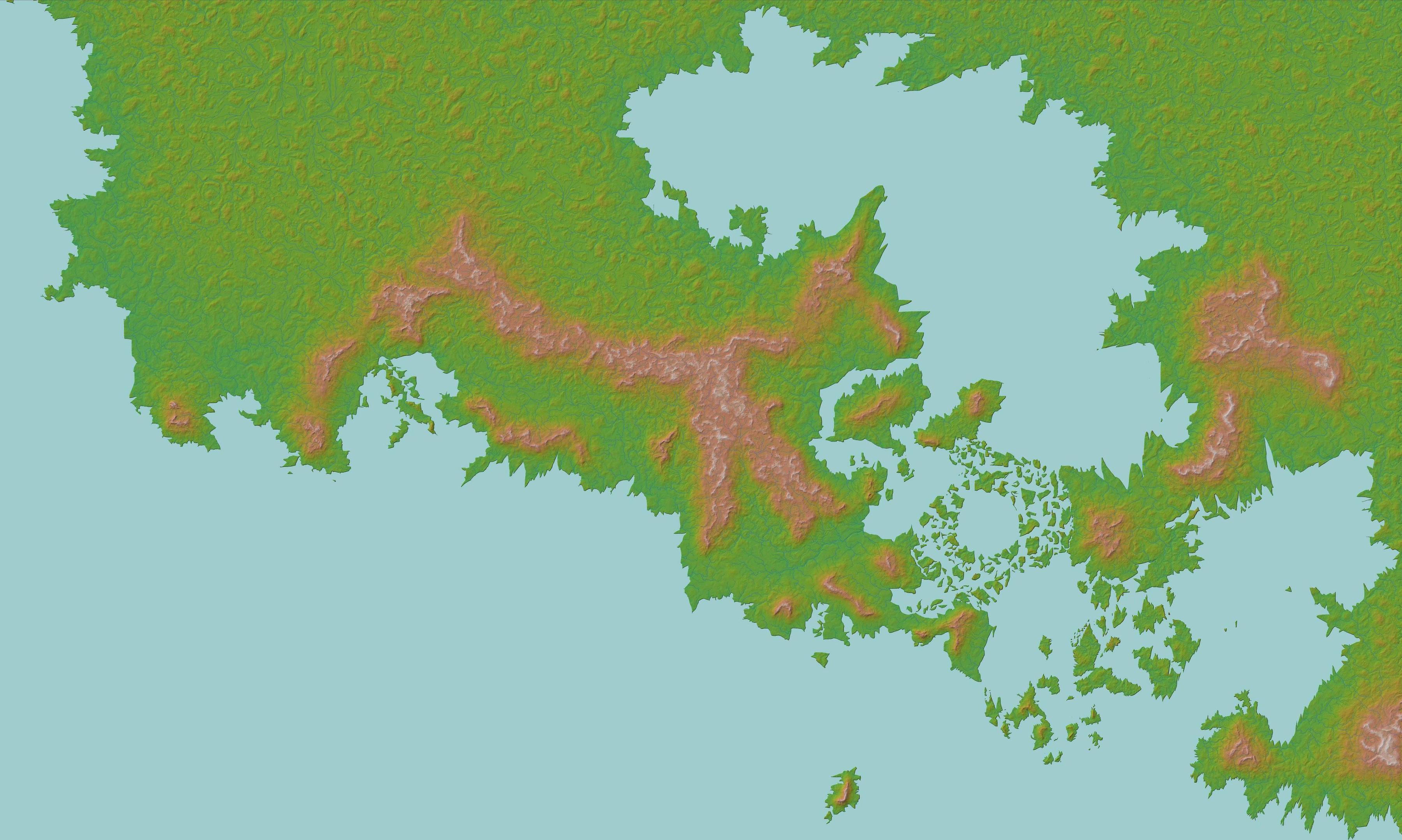 I created the above map using Photoshop and used Wilbur to erode the terrain a bit and calculate possible river flows. Still needs work but I need to create a river mask before I can go on. My method at the moment is to trim down the generated river flows to just the ones I want to keep, but I'm having trouble deciding how many rivers I should place and where they should be.

The scale of the map is roughly 1px=1km. It seems to me then that only rivers with an average width of >1km should be depicted. However, I'm mostly using the map as a reference for worldbuilding and writing purposes, so I'd be losing a lot of meaningful detail by not including smaller but still significant rivers. It's also difficult for me to realistically determine how wide/big each river would be, and factors like tributaries and how far they appear into the mountain ranges just makes it even more complicated. I'd imagine things like amount of precipitation at each catchment area would also need to be considered.

The map isn't based on an Earth-like world so a lot of geological factors like tectonics and latitude don't translate directly. Without getting too far into the weeds, I'd just like to find a decent methodology to get a reasonable river mask finished. Any suggestions would be appreciated.

science-based geography rivers
Share
Improve this question
asked May 1 '18 at 6:26

I'm also drawing a map like yours... I find it usefull to have at least 2 river layers :

This is important to keep only the major features on your global map. If you add too many details, the map will be hard to read. When the map is done, you need to be able to spot right away the elements that shape the land at a continental scale.

To decide what will be your biggest rivers, it may be usefull to draw the drainage basins (watersheds). Draw the limits of your watersheds along topographical ridges. I've done a quick edit on your map to show you as an example : 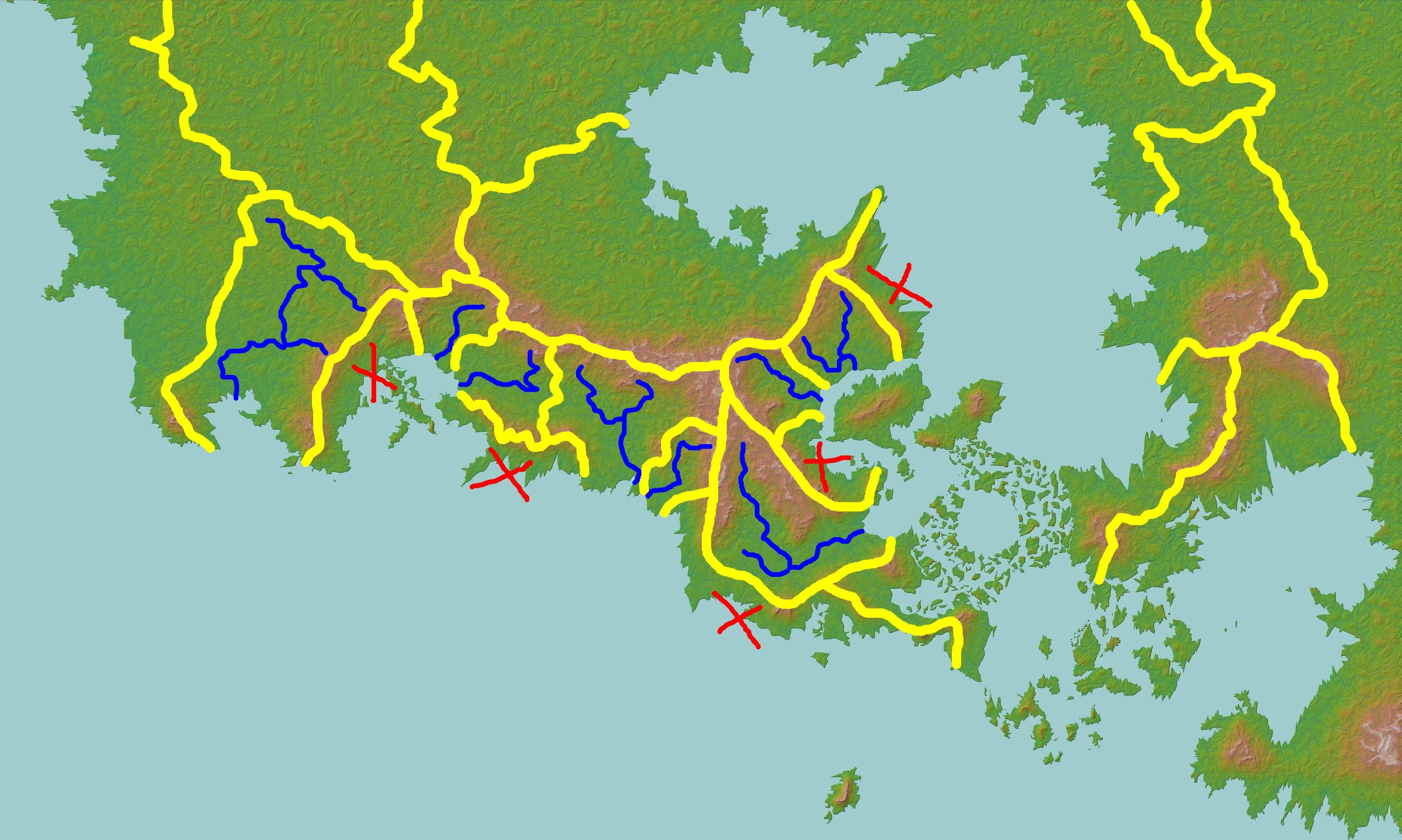 The yellow lines are the watershed limits (roughly). Draw it on a new layer, that you can hide later. I started along the mountain crest, and between rivers that flow toward different directions. Once I've made a few significant areas, I tried to add the major river in it.

Watersheds that are just a coastal band should not have major rivers, that's why I've put red crosses on it. This is where you should add rivers only on a local map.

When the watershed was big enough, I added a river, starting from the river mouth and then trying to find a way to the mountains. I added a few tributaries in the larger watersheds, to fill the voids.

As you can see, it's just a start. I haven't filled the biggest watersheds. You may need to subdivide them. I hope it gets you started anyway.

To get an idea of the number of rivers you should have on your map, just compare to a real map that you like, at the same scale (with roughly same climate). Even if your planet is different from Earth, it's not a problem. There is no "true map". What truly defines a map is not the planet, but the target reader. Maps are always based on choices, a balance made by the geographer to set the right amount of information, and make the map usefull and easy to read. 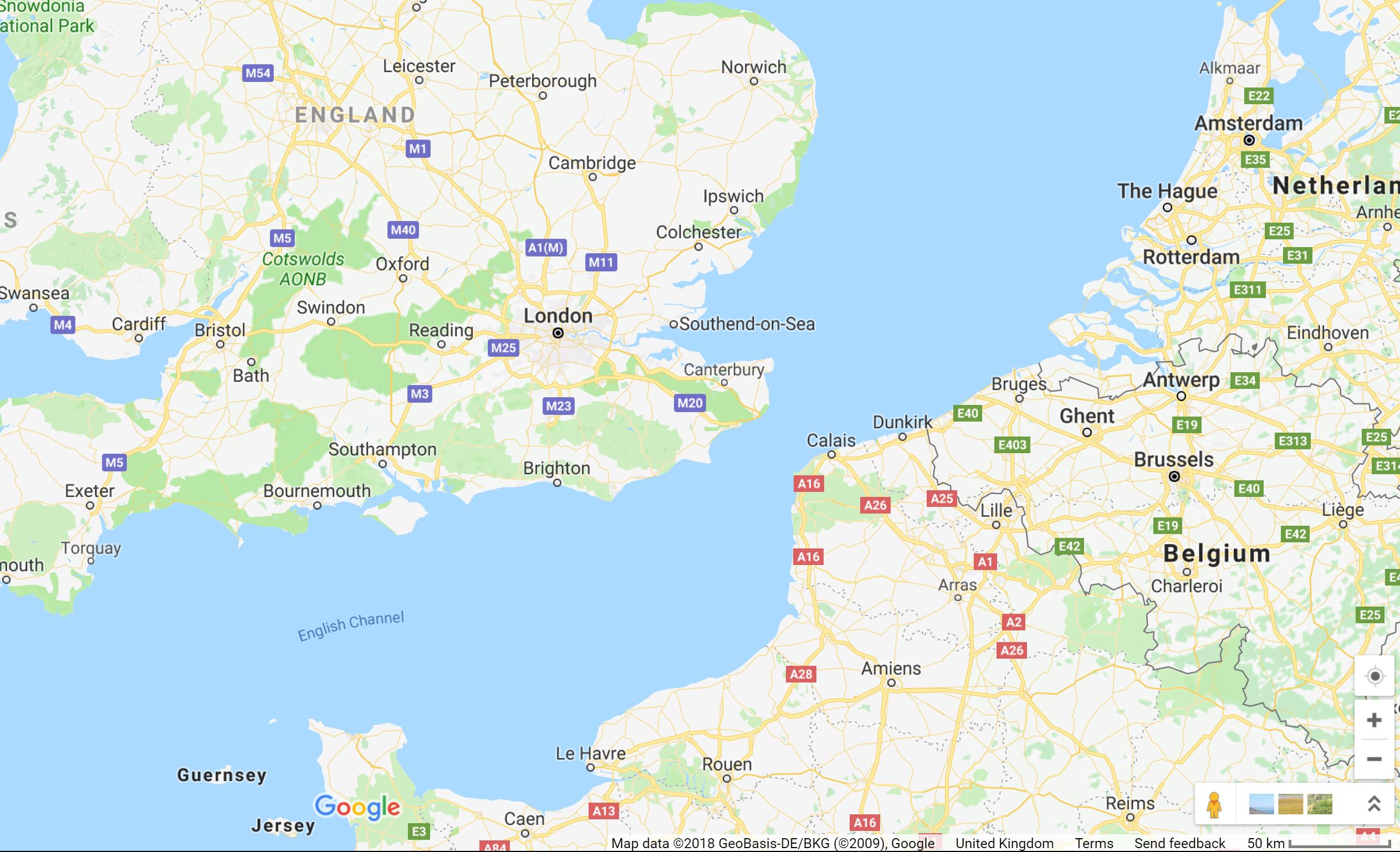 Here's a map of some of the UK. France, the Netherlands and Belgium. In the right hand corner you can see the scale, and all over the map you can see major roads. I'm going to go out on a limb and suggest that none of the roads that you can see on the map are actually a kilometre or more wide.

The point I'm (somewhat facetiously) making is that maps are never a truly accurate representation of the world - they can't be. Instead, they're a representation of those features deemed important to their creators, and so choose what to emphasise and what to play down or omit entirely.

Because of this there's no guarantee of scale - if your map needs rivers (as you said, omitting them would lose a lot of meaningful detail), then include them at as close to their actual scale as possible, making them larger than scale as necessary.

Sorry for this but I don't have enough reputation to comment but here is my recommendation.

Take some time to think about the cultural and geographical significance of the rivers and draw the important ones on. E.g. How the Nile allowed the Egyptians to thrive and adds green to Africa and how the Rhine allowed the Germanic people to trade better.

Not the answer you're looking for? Browse other questions tagged science-based geography rivers or ask your own question.

20
Is my river map even remotely realistic?
15
Creating a realistic world map - Waterways

12
Rules for the Development and Spread of Urbanisation
9
Underground Terrain Types / Biomes / Agriculture
6
Are the mountains and rivers on this map okay?
10
Determining climate and biomes in a non-planetary setting
6
Is it possible for a river to flow in a spiral pattern?
8
I'm going to have to redraw most of my rivers - what do I need to know to make them true to life?
7
How common is it for a river to enter a valley from a flatter plain?
13
Are these climate zones somewhat realistic?
18
Permanent river of lava