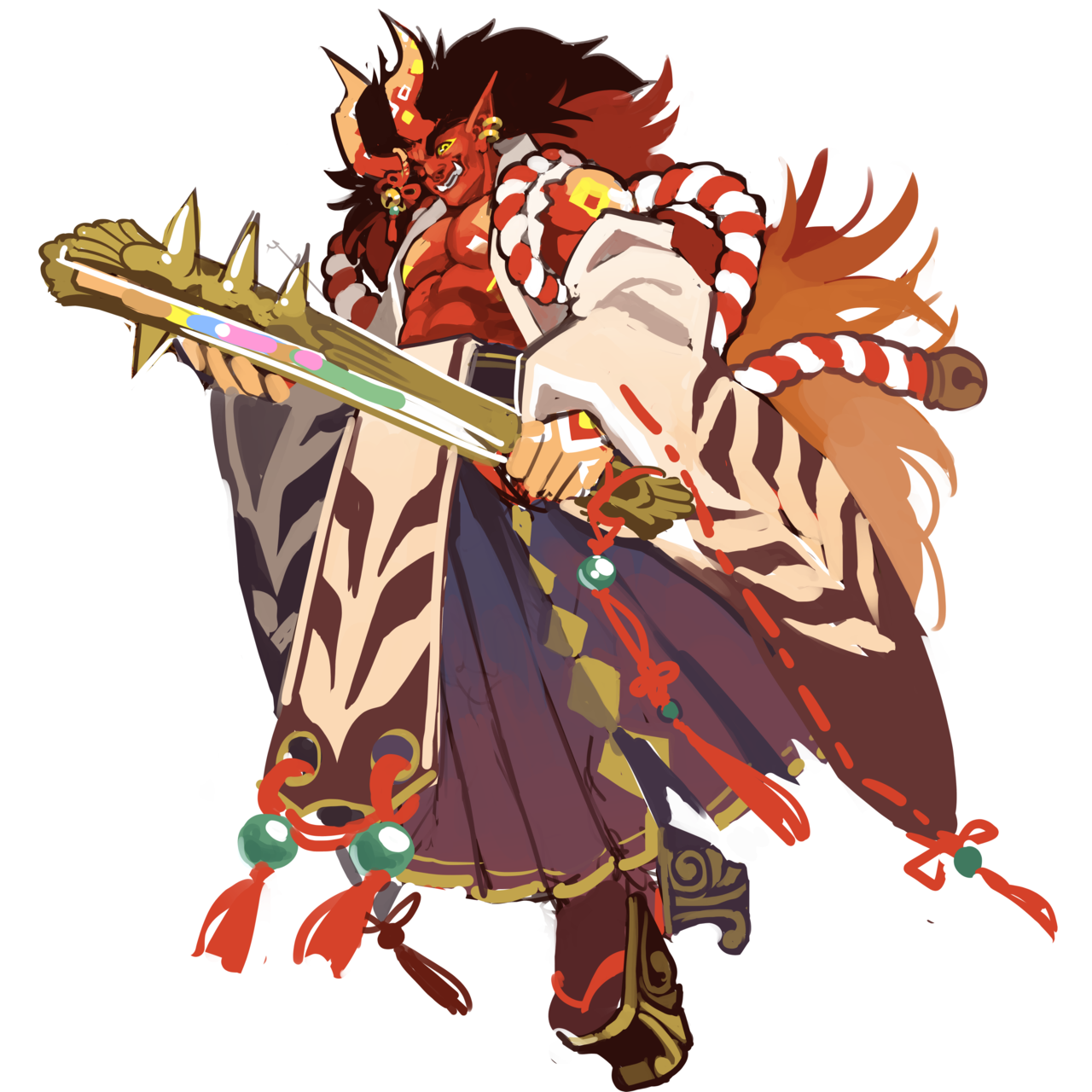 Originating from Japan, the majority of depictions of Oni (Kijo to refer female Oni/demons) are hideous, gigantic (taller than the tallest man!) ogre-like creatures with a single horn or multiple horns emerging from their heads, yellow eyes, sharp claws, fang-like tusks, and wild hair.

Their habitats are known to be remote mountains, caves, islands, if not Hell. Interestingly their omnivorous diet contains of alcohol (what kind of tolerance could they build up? Would they be immune to intoxication or always acts like it it doesn't even matter?)

One particular interesting thing about them is their skin color. Their most common skin color is red and blue, with red ones being more aggressive and blue ones being more clever(there's also black and yellow skin Onis, but that's easy to answer.) I was thinking what kind of mutation or evolution could cause their skins to match their behavior, or just in general?

Okay I got you some fun old info well first things first, Alcohol tolerance should be pretty easy for something as massive as 8-13ft, also considering it is of Asian descent then its tolerance of Alcohol is even more increased on account that Asians and Europeans have the highest alcohol tolerance of any other race, but if you want even more then you are going to need more of the special enzymes for digesting alcohol and bigger livers. Humans are already omnivores so no change is needed there.

Next is the size, 8ft is pushing it for something with a relatively human shape and at 13ft survival is 0. but don't worry all hope is not lost because all you need to increase that survival chance is to shift the organ sizes and body shape. So taking tips from our real life giants the major organs that need this is the liver, lungs, heart, and stomach. Now lets go to everybody's favorite subject, mitochondria density, yes the mitochondria will be needing to decrease the density of mitochondria per cell so the body does overheat, causing the proteins to unwind and the body turns into a pile of mush. Also considering they will live in hot climates(well hell is listed as on =e of their environments so I'm guessing its hot) then they will need to take a page out of the elephants survival as a giant guide, and get the most surface area it can buy having wrinkly skin. Now for the actual body shape, it will need pillar like legs(like an elephant), a wide frame, proportionally shorter arms, and probably smaller brains because the energy needed to maintain such a huge stature.

Okay last but not least we go to the skin color behavior correlation thingy, and while yes their is a disease that turns you blue(Methemoglobinemia) its not the best thing to base a species on. So what I propose is their skin color, and behavior actually comes from their environment and what they eat. this has actually happened to some African Tribe(Tuareg) and could be used to explained the behavior of the diffrent colors by saying its from culture or just that the red ones have a constant rash that causes them to be aggressive all the time.

Their skin color could be related to the same hormones that control behavior. The balance of these hormones causes aggressiveness, cleverness, etc, and the metabolized byproducts build up in the skin as pigments.

They could be obligate drinkers. They cannot synthesize some required protein or hormone, or something like it without alcohol. Alcohol does not lead to intoxication, but the lack of it would cause strange behavior and health problems.

The link between behaviour and skin-colour could be caused by the oni having the ability to change color with their mood and emotions: For example, they would turn red and be aggressive when angry, but when neutral, they might seem more intelligent, and their skin would become blue. Other colours would correspond to other emotions and behaviours

Well, how big do we need to be? Typically, humans don't grow beyond 7 feet, so 8 feet is doable. 8 feet is doable. As calculated here even 21 feet could be possible without altering the bone structure too much, but have serious problems. So... let's redesign!

What I think we're looking at is a highly mutated subspecies of hominid; possibly evolved from Gigantopithecus or a relative of that long-extinct creature. Why Gigantopithecus? Because that prehistoric ape is related to (precedes) both hominids and orangutans, plus it had a very large size.

Furthermore, an orangutan's diet is composed of 90% fruit, and if this species is or becomes the same way, it's not hard to see them eating a lot of fruit with natural alcohol (which could naturally ferment inside their digestive systems, as with sauropods, which would generate alcohol inside them) and evolving to have a high alcohol tolerance and/or affinity.

Since plenty of supposedly obligate herbivores, like deer and even cows, can and will eat meat if they have the opportunity, it's not hard to see such a species evolving to be omnivorous after some evolutionary trigger; perhaps new herbivores evolved that made it almost impossible for them to obtain all the fruit they need, so they began preying on them (since there were more herbivores than fruit) and gradually became omnivorous.

At this point, these creatures have evolved into ape-men, and possibly interbred with Neanderthals, becoming the primitive Oni. Their red or blue coloration comes from the fruit itself; carotenosis results in humans from an excess of dietary carotenoids (carrots, oranges, sweet potatoes).

In this case, there are two similar species of fruit, both of which have a specific effect on Oni physiology if eaten; plants with the red fruits evolved to have a defense like the acacia tree and ants (ie. Oni eat the fruit and special chemicals cause them to become addicted, aggressive, and territorial, therefore providing protection for the plant). Blue fruits, however, contain chemicals that enhance cognitive function (plausible; since foods high in lutein and zeaxanthin, which are both pigments, have been linked to increased crystallized intelligence).

Both of these fruits are frequently imbibed by Oni after first sampled, and the resulting buildup of pigment turns them red or blue. As for the Oni horns, that can be explained by Shope papilloma, a form of cancer that causes the afflicted to gain horn-like growths. A benign form of this cancer may have resulted in horned Oni, and since horned Oni did better in fights over mates, Oni today all have horns.