Could life develop above a planet's atmosphere?

Imagine a planet with extremely low density, and thus low gravity and an equivalently thin atmosphere, but a very active and strong magnetosphere that prevents solar radiation from destroying complex molecules or stripping the remaining atmosphere away. Imagine that, as much as the previous statements allow, it's earth-like - readily available organic-molecule building blocks, in the star's habitable zone, and liquid water. Now imagine that the very basics of life drop on this planet from a comet or something - basic self-replicating molecules, no more. Given these conditions, could life somehow extend itself to grow above the upper reaches of the planet's atmosphere (i.e. plantlike structures with "stems" or "trunks" outside the atmosphere, and more mobile life living in the "branches"), and what would it look like?

I suspect a plant can't grow anywhere near that tall. Mainly because of a combination of these 2 factors:

The 84m tall Giant Sequoia called General Sherman is estimated to weigh 2100 tonnes. If it grew to 480km tall the wood at the base of the trunk would have to support 2100 tonnes x 5714 = 11,999,400 tonnes. (This assumes no branches other than the ones General Sherman has now).

It would be easy to be buoyant in such an atmosphere regardless of gravity. If you had this in a low gravity scenario buoyancy does not change but you would not be crushed at ground level under the weight of the thick atmosphere above you.

Now let us take a page from the book of holopelagic seaweeds. - seaweed which is never rooted in the ground but which drifts freely with ocean currents. 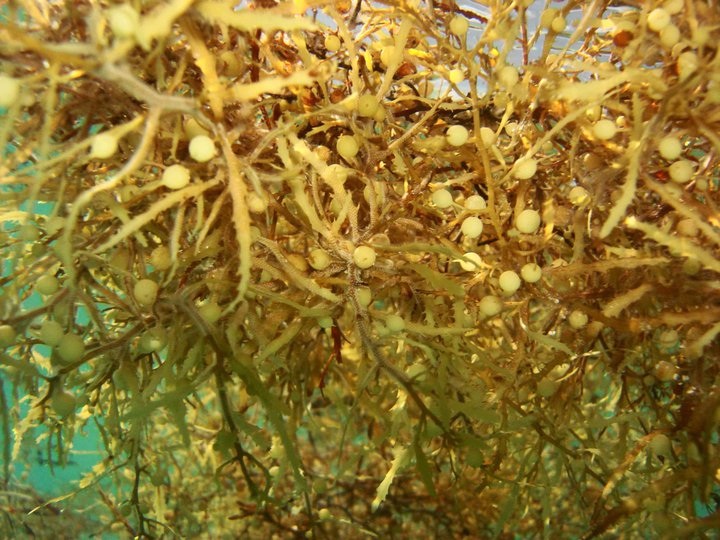 In the North Atlantic Ocean, Sargassum algae has evolved a completely pelagic existence, free-floating on ocean currents of the Gulf of Mexico, Caribbean and the Sargasso Sea. Mariners have documented large drifting islands of this seaweed for hundreds of years, mistakenly believing the appearance of the plant to be a sign that land was nearby. Their false assumption was that the seaweed had been torn from reefs and shoals during heavy storms. With other species of Sargassum, found throughout the oceans of the world, the seaweed indeed is usually affixed to rocks, reef and such. But two Atlantic species have made the evolutionary leap to become “holopelagic”, meaning they permanently live and reproduce adrift on the sea.

Your high atmosphere plants live there. They have built in floats like the sargassum, but "air" floats like balloon organs. They drift around in the top layers of the atmosphere, forming great cloudlike mats which your other organisms can inhabit. Perhaps these plants can change altitude some, ascending in the day and descending at night like jellyfish. The adults obtain all they need from the air, reproducing vegetatively. Seeds fall to earth below and young plants take off when they grow big enough to become buoyant.

Your question was about plants that are outside the atmosphere - presumably held there by some towerlike trunk below. My problem in thinking about that - the atmosphere decreases gradually. It is not like the ocean where there is a surface. You have gas in decreasing quantities for a long way up. A floating creature or any balloon must have atmosphere to float in and it will cease to ascend at a given height. Which might be very high.

Basically what I'm getting from the others answers is that its not possible, and I tend to agree. I don't think a tree could support it own weight that tall.

However if we attack this problem from another angle...

Your planet has these truly massive tall trees, just bumping up against the boundary of impossible. To get them even farther up high, they are on plateaus that are very high above sea level. Or maybe they're even really tall mountains. High rainfall would be required, but lets say your planet has that in those areas.

Then, something happens to the planet where it's losing it atmosphere, so that brings the level down. What that is I admit I don't know, but maybe someone else can help you out with that part.

Between all these things together that might bring you to just about the height you want. I would imagine, maybe, the part of the tree that sticks out of the atmosphere might die out, but everything that leads up to it could still be alive.

Not the answer you're looking for? Browse other questions tagged xenobiology life or ask your own question.

5
Can a perpetually darkening atmosphere exist and yet still allow life to evolve?

15
Pharbohydrates vs Carbohydrates
6
Could an atmosphere of neon, oxygen and carbon dioxide support life, and what kind of life could it support?
5
How would aircraft and air-life develop on High-G, Lower-Atmosphere planet?
0
“Rich mix” methane/oxygen atmosphere on a planet — how would life develop?
2
Is it possible for humanoid life to develop on a 1.4 G planet?
7
Life on a gas giant?
8
Could an electroreceptor organ work above water?
1
How could space life deal with the cold?
1
Could complex Precambrian life be possible?