A moon that is hard to orbit

I had a dream last night where I was coordinating a space program for an Earth-like planet, with a Moon much like our own. The Moon in the dream had an annoying quirk...

The space program kept sending hundreds of probes to try and orbit the Moon. Each probe managed to complete no more than a handful orbits around the Moon (each orbit taking a few hours). But the orbits quickly destabilized. For every one hundred probes:

I am aware of this question:

How can you make a stable configuration including a moon that has a moon?

But in my case I am thinking of probes, not natural satellites.

In fact, if you're willing to fudge your requirements just slightly, it could easily be the case for Earth's moon.

Let's look at the equation for orbital speed, also known as the vis-viva equation

where $\mu$ is the standard graviational parameter, $r$ is the orbital radius at the moment you're calculating the orbital speed, and $a$ is the semi-major axis of the orbit. For any practical orbital calculations, the standard gravitational parameter $\mu$ is a constant for any given body, because it is the multiplicative product of a constant and the mass of the body being orbited. For the special case of a perfectly circular orbit (eccentricity = 0; you're unlikely to come across this in real life, but lots of orbits have eccentricities pretty close to zero), we have $a = r$, leading to the simplified, approximate expression.

Notice that in both cases, we're treating the body being orbited as a point source of a gravitational field of a magnitude described by $\mu$. 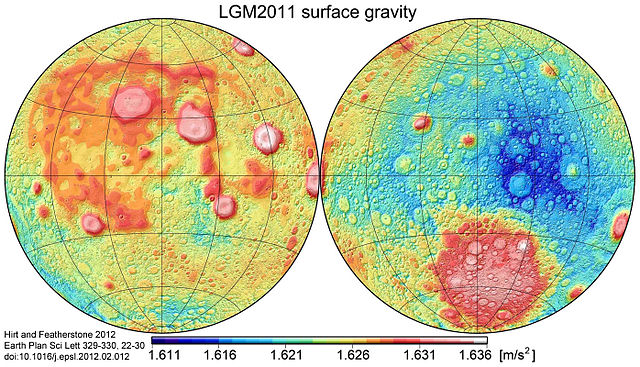 Look at that variance! We're seeing significant variance already in the third significant digit. Between dark blue and white on that scale is a difference in surface gravitational accelleration of over 1.5%.

In fact, the perturbation effects resulting from this are enough to make it difficult to attain a frozen orbit (a long-term stable orbit that minimizes station-keeping requirements) around Earth's moon. When the Apollo missions flew to the Moon in 1968-1972, these were unknown, so active orbital corrections and estimations of orbital degredation were used instead. The estimations turned out to be wrong, and active orbital correction requires fuel, which limits the useful life of the spacecraft in orbit. The frozen orbits were discovered (or perhaps rather, determined) only in 2001, almost 30 years after our first bout of manned exploration of the Moon ended.

While I'm not sure you could actually put a spacecraft into a lunar orbit and end up with it in solar orbit with no further powered maneuvers, you could put the one spacecraft that stays in its intended orbit into an orbit at inclination 27°, 50°, 76° or 86°, and the rest in other orbits, around a body exactly like Earth's moon, and you'll mostly get what you're after. Also, make sure to have your scientists in-story have frustrated discussions about mascons.

A lumpy moon has a lumpy gravitational field and orbits are, well, lumpy also and frequently not stable.

This has been an issue in putting satellites in orbit around comets and asteroids, and even around our own Moon, though there it's only an issue for very low orbits. (Unsurprisingly, the solution is to actively correct the orbit.)

For a moon to be significantly lumpy, it needs to be small (like an asteroid) or otherwise gravity would soon make it spherical.

Our moon has a very weak magnetosphere, but it does have magnetic rocks, which surprised scientists because it suggests a time when it had a stronger magnetic field. That issue is discussed here.

With that as inspiration, let's assume a younger solar system with a younger moon with a highly viscous fluid outer core sloshing around an abnormally dense iron core. Let's also assume that this confuration has kept the moon from becoming tidally locked to the planet, so that it can rotate much faster.

This would give it a much stronger magnetic field, which could cause all kinds of havoc with probes: from yanking their magnetic frames around to messing with the navigation electronics and power system.

(For the record, I like Mark's answer better as I believe it would be much harder to detect and, therfore, harder to compensate for.)

If moon's Hill sphere is less that moon's radius, then it would be impossible to have stable orbit around it.

Our Moon has its Hill sphere with a radius of 60,000 km. If you bring it near Roche limit(20x times closer to Earth) then moon's Hill sphere would be 3,000 km - less than Moon's radius.

If you can make Moon less dense then you can place it father away.

Not the answer you're looking for? Browse other questions tagged science-based reality-check space satellites .

3
A planet that cannot be orbited
50
Can I use a trebuchet to launch satellites into space from a lunar colony?
13
Simulating gravity in a gravity-less universe
13
How can you make a stable configuration including a moon that has a moon?
3
How do I stop my near future city state from flying past a certain height and distance or sending up sats, but keep radio communications intact

8
Conditions needed for a Fractured Moon
12
A world with a moon orbiting much closer than ours
13
How can you make a stable configuration including a moon that has a moon?
6
Making a slow orbit around a large gas giant
4
Does it make sense to have a world with a very quickly orbiting moon?
4
Describing a planet on a comet like orbit
8
Is this planetary moon's calendar possible?
4
What would happen to the moon if Earth shattered?
1
What if aliens recieved a rogue Earth?