Could a cow produce bottled milk?

Could a cow produce bottled milk? The answer is, of course, no; there is no way a cow could do that; obviously. Perhaps I should be more clear on what I'm asking.

Is there any way a mammalian creature could evolve to create a substance within its body that is somewhat similar to one of the compounds we refer to as glass, give that material a defined shape, and somehow expel it from its body?

In the title, when I say "bottled" I am referring to the classic glass bottles that milkmen would deliver milk in, as seen below. 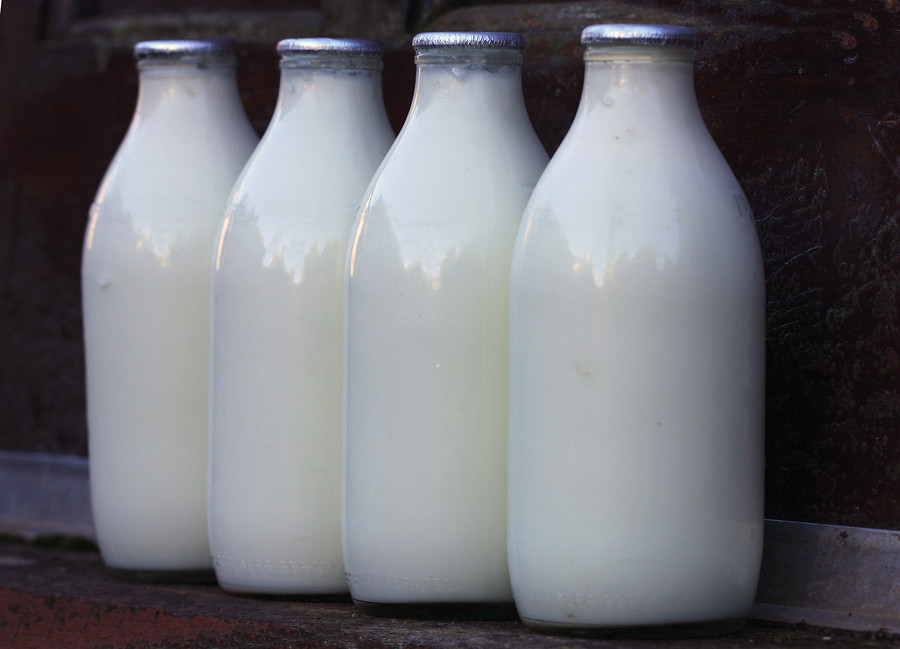 Of course, the lids on these bottles are made from something other than glass, but just ignore that for now.

So my question is: could a glass making creature exist; and how would it do what it does? (OK, two questions, so sue me.)

P.S. If you're wondering why this question exists or how it came to be, don't; just don't.

Edit: Any scenario that in some way resembles what I described above would be acceptable, the material does not absolutely have to be silicon-based.

Some living creatures are actually able to create glass in their bodies, typically in the form of silicate shells or exoskeletons. The answers to this question provide some examples, which I will summarize here.

I'm not entirely sure how the existing real-life glass-producing species, such as diatoms, radiolarians, glass sponges, and many grasses, create their shells, spicules, and phytoliths, but as far as I can tell, they use a combination of enzymes and organic acids to dissolve silica from sand, then convert the solution to alkaline sodium silicate (aka "water glass"), then reintroduce it to an acid to harden it into glass. Your cows could use this same process to convert silica obtained from plants (as I mentioned earlier, many grasses create silica phytoliths to wear down herbivores' teeth) into glass bottles.

Alternatively, your cows might create glass by way of "spin-on glass", a compound composed of carbon, hydrogen, oxygen, and silicon that, when cured, transforms into a randomly-arranged network of SiO2- that is, glass. Curing spin-on glass is normally done by exposure to ultraviolet light, but I would not be surprised in the least if your cows found an enzyme that could do it as well.

I imagine your cows could have a sort of "bottle gland" in their udders surrounding the mammary gland that uses either the water glass or spin-on glass pathway to fabricate the glass bottle at the same rate that the mammary gland fills it with milk. The milk-filled bottle is extruded out through the teat as it forms until it becomes too heavy, prompting the bottle gland to narrow down the top of the bottle, seal it, let it fall free, and begin forming a new bottle.

Imagine something much like an egg, filled with milk. Not remotely like a glass bottle (transparent and with a removable cap) but a step in the right direction, maybe.

I could even think of a sort-of-twisted evolutionary part that leads there.

A bit like histotrophic viviparity, if I remember the biology correctly.

For that to be possible the creatures body temperature would have to be that of a furnace around 1700 degrees Celsius. Glass is a compound made from silica, various metal oxides, lime, soda, magnesia, and potash. In order for the proper chemical reactions to occur you need a fairly high temperature. Your creature that excretes glass would probably be some form of silicon based life living within a lava flow or on the surface of some incredibly dense and large planet very close to its sun with a crazy heavy atmosphere. As for if silicon based life is even possible, that's a whole other can of worms.

So its at least within the vague realm of possibility for an animal to exist that excretes glass, but no, it is not even remotely possible for it to just crap out fully manufactured and filled milk bottles.

Not exactly a glass bottle but, We can think of this process something like this:

The entire process would look like a fast-forward development of gourd. or A balloon is filled with milk and tied from the top.

Not the answer you're looking for? Browse other questions tagged biology evolution biochemistry mammals or ask your own question.

141
How do Glass Ants create their tunnels?

5
How can I preseve a small sample of blood for centuries?
3
How could the earth produce more oxygen?
13
How could an acid-cow make a barrier against acidic milk by synthesizing PTFE, and what would it line?
11
Can my synthetic human grow?
15
How could a female member of a species produce eggs unto death?
19
Could a living creature produce graphene?
6
How to produce milk that's similar to blood?
7
Can an animal produce milk all the time?
3
Without cellular-level aging, will brain eventually wear out? If so, how long it will take?
4
How a living creature could develop a way to create high pressures inside its body?