How would I make a fantasy race have attractive men? [closed]

So, one of the constraints I have on designing my world's fantasy races is that all of them used to be human, because these creatures only came about through humans getting access to supernatural shapeshifting powers. This means, among other things, that they all have to conform to human standards of beauty, because (at least with the first generation) they don't magically get their own new standards of beauty upon transforming. All of the creatures I create, if I want it to be at all believable that more than a miniscule minority of people became them, have to be things a human could look at and believably go "yeah, I'd hit that".

But this brought up an interesting question as I was designing them: how should I design a fantasy race so that it has attractive men?

I don't mean that in the sense of "what makes guys sexy", I've been able to get a pretty good idea of that on my own. No, I mean more along the lines of:

What is the male equivalent of a catgirl?

We've seen endless examples of female fantasy creatures with exotic nonhuman characteristics designed specifically to make them more attractive to men, from elf ears, to animal ears, to tails, to those anime girls with wings where a tramp stamp would be, but it's the strangest thing, I can't seem to find much discussion at all about what nonhuman features you could add to the male form to make them hotter.

And you see, the first two races I introduce are basically the "gateway races", intended to ease humanity into the concept of turning themselves into nonhumans, and so they're the least bizarre looking and the most conventionally attractive by human standards (though still capable of having unattractive members, I'm talking more about the upper ceiling). The speed-based race is more traditionally feminine in appearance, the strength-based race more traditionally masculine. The men of the former are the pretty straightforward concept of pretty-boys, so they're no problem, but I'm trying to figure out what sorts of "this clearly isn't human" features I should add to the men of the latter species that would enhance, rather than detract from, their appearance.

I propose that your story have an evolutionary-type process for determining hotness.

This is because whatever you choose can be claimed to be the result of a process in the story. And that makes it more fun.

First you need some scenario where male hotness can easily be determined via multiple data points. There is too much potential for noise if hotness is determined only by who you pick up at the club on some given night. For example, newly transformed folks have something like a youtube channel where upvotes or membership is largely contingent on the hotness of the channel owner. I understand things very much like this exist in the real world.

As others contemplating transformation or modifying their own transformation decide on what form to take, they will consult the leaderboard and then model their transformation on what is popularly considered hot. They will add their own touches or ideas which is where the evolution comes from. The occasional individual will go his own route with his own ideas which probably will be a resounding flop but might succeed greatly - then hot concepts based on this lucky individual will be incorporated into the forms taken by later transformees.

I like this because you can lay forth the current hottest not as your own conception of what is hot, but as the evolved product of the described process. Just as the most arousing smells for men turn out to be vanilla and pumpkin pie your hottest looking male morph might more or less look like the cute monkey from Littlest Pet Shop. 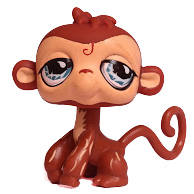 He actually does have a very male cuteness about him, this monkey. Sort of a Fred Astaire thing going on.

Not the answer you're looking for? Browse other questions tagged fantasy-races or ask your own question.

7
Vocal hardware required for a single creature to communicate with any land animal?
20
The Biological Dullahan
14
Reasons to voluntarily change into a fantasy race?
17
How quickly could the fashion industry react to new humanoid fantasy races?
10
How much of an advantage in medieval-style combat would it be to have four arms with pivoting shoulders?
21
Finding real world historic examples of cultures/organizations/tribes to represent Orcs
14
How to make all magic-casting innate, but still rare?
7
Best Military Use of Mercenary Giant Ape Men?