would the shadow of a 4th dimensional object be physical to a 3 dimensional being? [closed]

If there was a 3 dimensional plane existing within a 4d space and something forth dimensional casts its shadow into this 3d plane would it be physical to 3d beings on that plane?

Side note: If anyone knows a better way to theoretically give mass to a shadow feel free to explain or point me in that direction.

The standard tesseract shape you're probably familiar with is the 3D shadow of a 4D object. 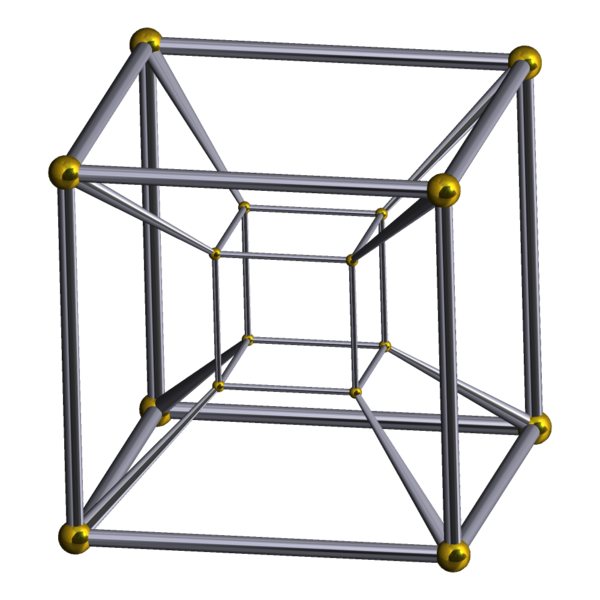 We can't represent 4D shapes in the world any other way. It wouldn't have any more physical presence than your own shadow does. It would simply be an area with less light.

You can't give mass to shadows. They represent an absence of something.

I'd like to address some controversy both in the question and in answer by Samuel. I'd try to supply some further information and actually answer the question, but bear with me first.

Let's stay in our 3D world first. The shadows are not flat, as one would actually assume from looking on them and from the typical all-day usage of the word. A shadow is a 3D form, a volume.

Basically, everything behind an occluddee in absence of other light sources is in shadow. Look at the typical explanation of lunar eclipse, for example.

Now to the question

4D objects in 4D world would have 4D shadows. No win here.

An intersection of a 4D shadow with a 4D wall would probably produce a 3D intersection. We might learn something about the shapes of the 4D object and its 4D shadow when studying various such intersections. So-to-say 3D silhouettes of 4D objects.

In a sense (back to our 3D world and 2D displays), something similar happens when a 3D scene is displayed on a usual computer screen or when a 3D projection of a cube is sketched on a very 2D sheet of paper.

Not the answer you're looking for? Browse other questions tagged spacetime-dimensions or ask your own question.