Zerg Overlords are flying alien creatures that aid their broods by managing lesser members of the swarm, transporting units within their carapaces, and alerting a hive about any danger they perceive with their heightened senses. 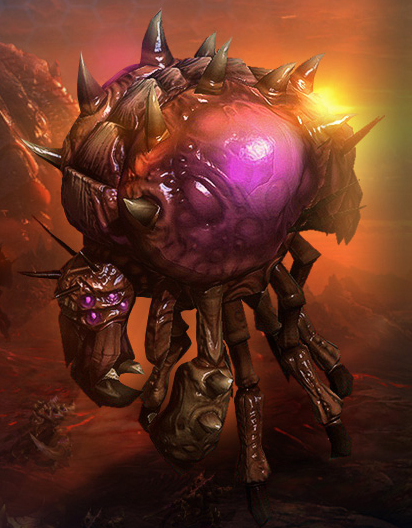 They are also quite large: 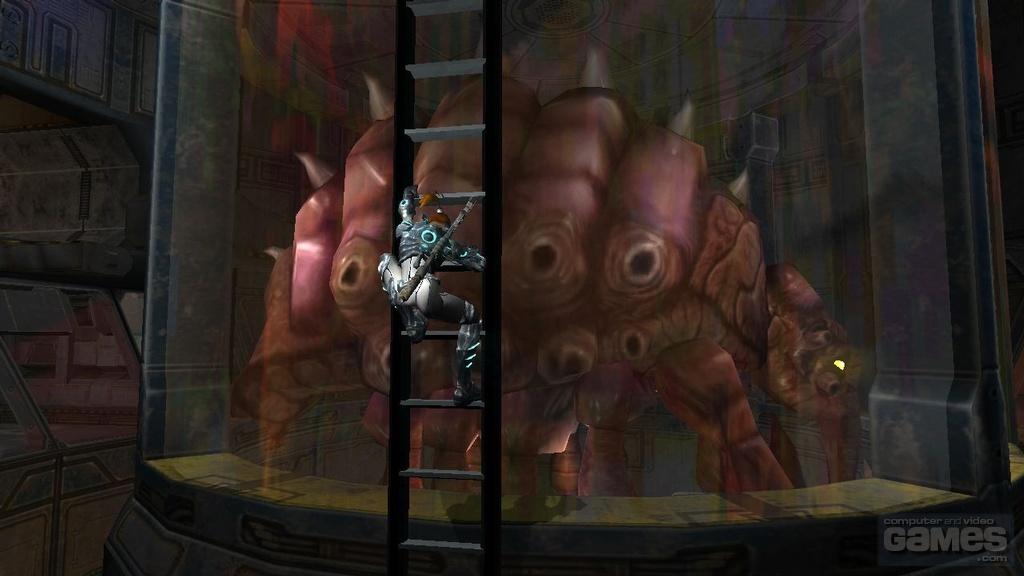 An inprisoned overlord, with a human close to it for size comparison. The overlord's head is to the right (notice glowing eyes). Some images (which I cannot paste here due to copyrights and etc. suggest they may reach sizes at least twice as large as the one in the image.

Last but not least, they are able to survive in space for an indefinite amount of time. For this question I'd like to ignore their capacity for interplanetary travel, though.

How close to a Zerg Overlord can an anatomically-correct creature evolve to be?

P.s.: in the Starcraft series of games, the Zerg are capable of controlling and speeding up their own evolution. I would like to leave that out of the question as well. I am more than satisfied with the most basic Overlord.

It is difficult to say if a Zerg Overlord can evolve in real life - there is such variety of life on Earth that it certainly seems almost anything is possible. Perhaps an analysis of some close living creatures may yield some results:

It may be possible for all the above attributes of creatures (although we are talking about creatures from several different species type) to combine to form your Overlord, however there are some significant obstacles to overcome:

However, you never know. Given billions not just hundreds of millions of years of evolution it may be possible that a creature that large, who has those attributes, and survives in space, could evolve. It may be that 'life finds a way...'.

So the problem with the Zerg when it comes getting something close to there size is that there aren't any know insects that have achieved the size of something that big.

I know studies have shown that insects have achieved the size of 2-3 meters or (6.5 - 9.8 feet) in times of Anicent Earth, scary but still not close to a Overlord from StarCraft.

An Overlord is Overlords retain the thick outer shell of the Gargantis, and it changed little in the assimilation process. Their exoskeletons are strong enough to resist a lightning strike.

Overlords: with the correct growth stimuli, [they] can carry other zerg within hollows in their hides. In this form they become deep-space transports; the importance of their function is underlined by the sheer number of overlords found accompanying zerg forces. As spacefaring creatures, an overlord's carapace pressurizes and seals whenever the creature flies through vacuum. Two species of unidentified symbiotic organisms seem to regulate these functions, though Dominion scientists have been unable to obtain any living samples—these organisms die within seconds if removed from their host overlord. Due to their need to support many different strains of zerg at once, overlords can sometimes exhibit spontaneous adaptive mutations in order to improve their own efficiency.

However exoskeleton animals developed in the ocean and then started to come onto land. So if were trying to get a creature that is close to be anatomically correct of I would suggest the Lion Jelly Fish in terms of size when it would be close.

The largest recorded specimen found washed up on the shore of Massachusetts Bay in 1870, had a bell with a diameter of 2.3 metres (7 ft 6 in) and tentacles 37.0 m (121.4 ft) long. Lion's mane jellyfish have been observed below 42°N latitude for some time in the larger bays of the east coast of the United States.

So my idea would be to have this jellyfish mutate in the water and develop an exoskeleton from mutation. This works as well since I believe Overlords use helium-filled gas sacs and a weak telekinetic psi-ability for lift and motive power. This helium is generated through an efficient respiratory system distributed throughout the overlord's carapace. The excess helium is stored in thick sacs that contract and expand through rudimentary pulses, allowing overlords to regulate altitude and propulsion at will. They move quite slowly however (if you are looking for it to float that is) 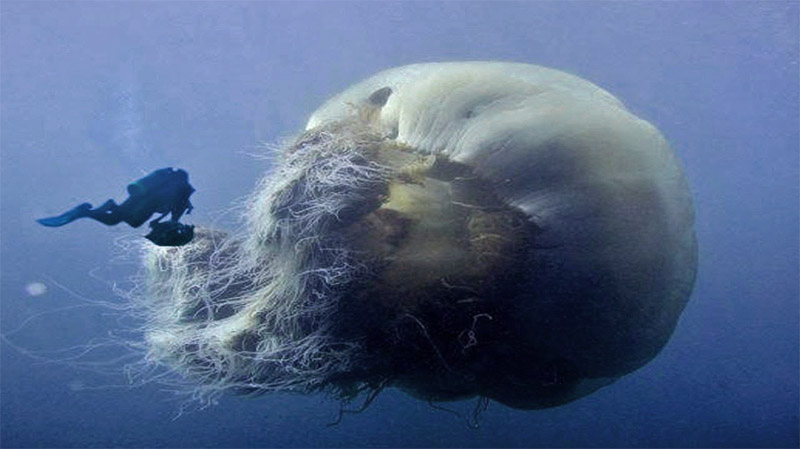 Size Compassion for all Zerg 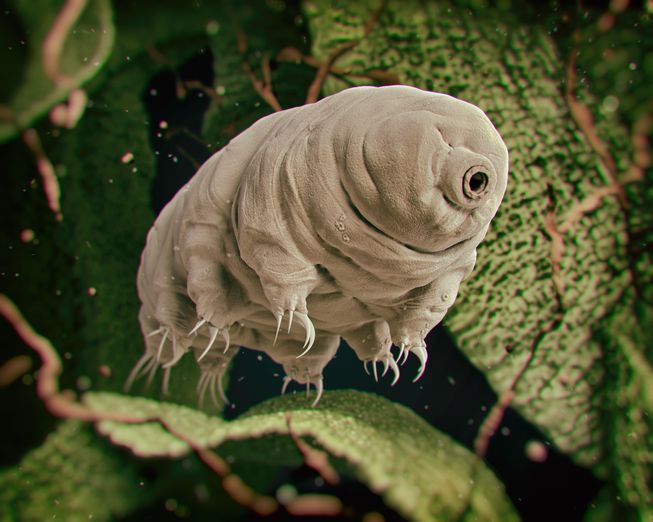 Tiny invertebrates called ‘water bears’ can survive in the vacuum of space, a European Space Agency experiment has shown. They are the first animals known to be able to survive the harsh combination of low pressure and intense radiation found in space. Water bears, also known as tardigrades, are known for their virtual indestructibility on Earth. The creatures can survive intense pressures, huge doses of radiation, and years of being dried out. …

After 10 days of exposure to space, the satellite returned to Earth. The tardigrades were retrieved and rehydrated to test how they reacted to the airless conditions in space, as well as ultraviolet radiation from the Sun and charged particles from space called cosmic rays. The vacuum itself seemed to have little effect on the creatures. But ultraviolet radiation, which can damage cellular material and DNA, did take its toll.

In one of the two species tested, 68% of specimens that were shielded from higher-energy radiation from the Sun were revived within 30 minutes of being rehydrated. Many of these tardigrades went on to lay eggs that successfully hatched. But only a handful of animals survived full exposure to the Sun’s UV light, which is more than 1000 times stronger in space than on the Earth’s surface.

The captive creature there has a very tardigradoid build, I think. 8 legs? Ask the girl on the ladder; she has a better angle.

In any case, the spaceworthiness is the highest bar and tardigrades can do that. Your creatures can be scaled up tardigrades.

This is just a superspecialized bee.

The presence of a hive mind is already present within bees, and they can already fly.

The alerting other members of the hive is somewhat akin to pheromones, used by all eusocial insects.

The part about transporting lesser members of the give can likely be paralleled by it making and carrying a small mini-hive of sorts with a few cells to support worker bees.

Obviously the biggest flaw to my idea is that this "overlord" bee would have to be massive, possibly on the order of a few inches, mini-hive and all.

Not the answer you're looking for? Browse other questions tagged creature-design evolution aliens or ask your own question.

68
Are flying plants possible?
13
What ways could flight evolve besides the wings of bats, birds, and bugs?
7
Is an alien race like the Zerg from Starcraft feasible?
7
On the viability of living balloons
2
Life on land, sea, and what else?