Demons have been a staple of multiple religions for thousands of years, just like angels. While some of the points brought up in the Anatomically Correct Angels post (and other posts on flying humanoids) are applicable here, there's still more to discuss.

My demons are comfortable in significantly higher temperatures than humans, and can withstand volcanic fumes. Besides these characteristics, they have:

How would such beings evolve? How would their biology work? 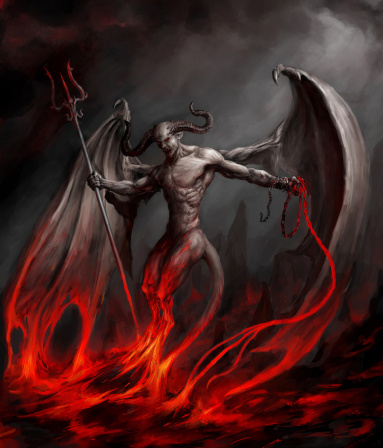 Like many mythological creatures, what you describe are aspects of already real animals, just combined in ways we don't see together normally.

It is entirely plausible that these characteristics could evolve in a different context. Upon Charles Darwins visit to the Galapagos Islands, he saw creatures which had attributes of others - for instance birds that had wings but were flightless, and lizards that swam and had prolonged periods underwater - still entirely consistent within the theory of evolution.

So let's have a look at each of your characteristics individually:

It is entirely conceivable the above characteristics may evolve, given the right environmental conditions and sexual selective pathway.

My demons are comfortable in significantly higher temperatures than humans, and can withstand volcanic fumes.

The exact temperatures that animals can withstand vary by species. High enough internal temperatures (approx. 40~42°C/104~107°F for humans, for example) cause protheins to fold out of their shapes, and/or combine among themselves into something else. This kills a creature because their metabolism stops.

Animals evolve to withstand high environment temperatures by either insulating themselves, thus keeping an internal temperature cooler than the environments, or by relying on protheins that lose form on higher temperatures.

You may also wish to look at this question:

How could mammals evolve to resist damage from fire?

Besides these characteristics, they have:

Many animals do too. This is no problem, it's just a matter of pigmentation.

Grey can evolve so that they can camouflage against the background of wherever they live in, many rocks are grey, ashen, pewter etc. Red, in nature, is also usually either:

In order for a human sized creature to fly, they would need very large wings. So probably the demon doesn't fly with those wings. If they do, they probably get some lift from magic.

I don't know why this is so special, everybody has those quite often during their teens.

Oh, you mean pointy things on someone's head? So many mammals have it, it wouldn't be a stretch for a demon to have the genes for those as well.

First off, let's talk body plan. Your demons, being roughly human-sized, will need very large wings. Starting with the similarly sized pteranodon, they'd need around a 20 foot wingspan to support a 100lb body. (Very roughly: pterosaur weight estimates are generally somewhat dubious.) Your demons have to support the added weight of horns and arms, so you might need something a bit bigger than that.

Bat-like wings are certainly possible. The primary difference between bat and pterosaur wings is that bats rely heavily on an enlarged second finger (our equivalent is the pointer finger), while pterosaurs relied on an enlarged fourth finger. In any case, convergent evolution will likely drive your demons to have a substantially more enlarged primary flight finger, as compared to bats, with relatively thin secondary flight fingers to save weight.

Your demons will likely have a diet heavily reliant on carrion and medium sized animals or fish. (Or, at least, that's what their ancestors would've eaten.) This, again, is based largely off of pteosaurs, which are the most similar creature to what you're designing. Pterosaurs used long skulls to pluck food from the ground mid-flight. Your demons have short, human-like skulls, but are hexapod, unlike pterosaurs, with a secondary set of arms beyond the ones that have evolved into wings. These arms will likely serve a similar purpose, growing long, with grasping claws, to pluck prey either from the earth or from the sea. Flying also makes finding carrion easy, so they'll probably eat a lot of that.

Takeoff will be from a quadrupedal stance. This is the same way that pterosaurs likely took off, and is a bit more efficient than the two legged launches that birds favor. They'll be using their arms and legs to launch, rather than legs and wings, like pterosaurs favored. They likely won't be able to walk upright, but will instead walk on feet and knuckles, similar to gorillas, likely squatting on their back legs, supported by their tails, when they aren't moving around. This will provide them with the capacity for short bursts of speed for takeoff, while protecting their hunting claws. If they're living in a rocky, volcanic environment, of course, they'll likely be using their hands and claws to climb when on the ground, and rely on launching off of cliffs for takeoff.

There isn't much, in terms of food, in high temperature areas with lots of volcanic fumes. However, if the only nesting areas are active volcanoes, it's reasonable that your pterosaur-demons would evolve increased resistance to heat and toxic gasses in order to live there. It's also possible that volcanic nests are simply the best way to avoid predators. If their surroundings are largely treeless grasslands with both plentiful food and plentiful terrestrial predators, raising young in a largely inaccessible area may be advantageous enough for them to evolve to dwell in those areas.

Horns, in general, aren't terribly useful for either flying creatures or predators. However, they aren't completely unheard of.

It's likely that either the horns will be relatively small, such as those found on carnotaurus, or else that they'll be hollow, such as the casques found on some species of hornbill. In the former case, they'd likely be used in dominance fights between males. In the latter case, they'll likely be used as resonating chambers for calling out across great distances. The latter seems much more likely, given that they've got arms, rendering headbutting somewhat less useful as a means of combat. The ability to produce loud sounds, for a creature living largely in a low-visibility, loud environment such as the inside of an active volcano, would certainly be useful. Demons could call to one another, both for general communication, and to gauge distances for landing. Swooping in to a perch through a dense cloud of volcanic smoke would certainly be much easier for a creature that can call back and forth to an already-perched mate or flockmate, in order to effectively gauge distances, and figure out which direction "home" is in.

0
What evolutionary pressures would lead to Oni?
33
Anatomically Correct Angels
25
How to make a flying human
4
How could mammals evolve to resist damage from fire?
2
How could a human be corrupted into a demon?