What is a creative way to bestow the 'planet' in Cylinder with seasons? I would especially enjoy a scenario in which different lengths of the planet experience different seasons simultaneously. The 'sun' and 'planet' must remain cylinders and must remain parallel.

EDIT: The 'planet' rotates about its length to produce a day-night cycle similar to Earth's.

To avoid too much confusion I am going to state some of my assumptions. I had to edit my answer slightly, to take into account some factors I had realised over the few hours since I posted my original answer. If people don't agree, I can always roll back. I still hold by my answer, although I do think altitude will actually be the biggest factor affecting your temperatures and hence seasons.

When I first pictured the situation, I assumed that your infinitely long planet was infinite along what we would consider the width, or East/West equator, of a normal planet. The North/South radius of the planet being normal dimensions. This results in your planet being infinitely wide with Earth-like cylindrical radius. I use the term latitude to talk about regions North and South from the central equator (which is the horizontal cylindrical latitude that is the receiving the most sunlight). There would be no frozen polar latitudes and you will have to adjust the typical North/South magnetosphere (if your planet even has one).

For a day/night sequence your infinitely long parallel planet has to be rotating on it's infinite East/West axis, with the infinitely long sun on one side. Like a rotissary chicken. This daily rotation is always in the same direction, like a normal planet.

Sunrise and sunset would be on the N/S poles rather than E/W equator of a normal planet (which in your situation is infinitely wide). There would not be any latitude on your planet that had a different amount of sunlight over the day due to an axial tilt, which is responsible for the seasons. Your parallel planet does not have an axial tilt, hence your trouble figuring out the seasons.

To get around this you need to add another component to your parallel planet. You can add a stationary twisted feature along the length of your cylindrical planet. The tightness and height of the twist is up to you, which would affect the concentration and duration of the cooler lee shadows. The twist doesn't bring the planet as a whole any closer to the sun along it's infinite width but rather just twisted regions of it along the cylinder. 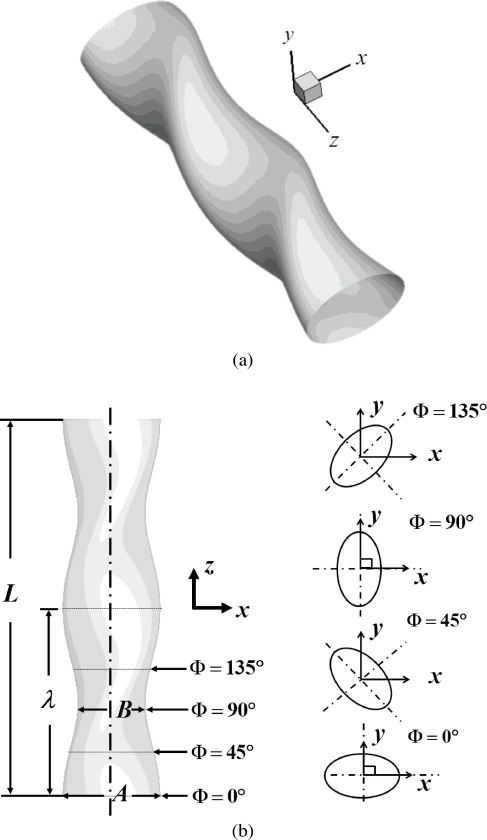 So the 'north' region is twisted closer to the sun while the 'south' is twisted away. This provides different bands of altitudes, and 'shadow areas'. As the planet rotates, each side of the twist would receive the same amount of sunlight through the day. Just always at different times of day. Depending on which way your planet rotated, one side of the twist would always receive more morning sunlight and then be in shadow for the rest of the day.

So you have day/night, various altitudes and temperatures but still equal amounts of sunlight, just at alternating times over the day. So how to get 'seasonal' variation?

To try work around this, you can add an oscillating twist feature along your cylindrical planet. So the 'north' region twists closer to the sun while the 'south' twists away for one cooler 'season'. Then it untwists and equalizes providing a neutral warmer 'season' before twisting in the other direction providing a new different cooler 'season'.

This oscillating twist would take months to work itself through the cycle, providing different seasons where regions receive more morning sunlight and then later in the year more afternoon sunlight, as well as periods with more variation in altitude separated by a periods with a flatter neutral terrain. It would not be as extreme as a typical planet but would be noticeable to some extent. Especially if you had additional rugged topography on top of the 'twist' features, which provided further shadow effects.

These seasons would not be like a typical planets. Those areas within the leeward shadow of the twist will also be cooler than those areas on the sunlight side. Due to the effects of altitude on temperature, higher regions that are much closer to the sun could have a cooler season than those further away from the sun. When these two facts combine, I think your seasons will have a 'banded' nature.

As these twists work themselves in and out, they will result in pockets of isolated regions experiencing different seasonal conditions at the same time of day along the same latitude (as you requested in your question). The height and tightness of the twist affecting the extremes. You can see the 'contours' on the image provided earlier. The more twisted the planet is, the more areas of cooler altitude.

Solar: If you couple this oscillating planetary twist feature with a similar solar twisted feature then you could have more extreme variations in your seasonal conditions. It's more likely that your planetary dynamics of different objects, eg sun and earth, would have the same features working on them with different timescales.

The solar twist would be considerably slower and take 100's to 1000's of years to complete. This slower solar twist could give you changing conditions similar to the aphelion and perihelion cycles. Those lengths of the planet that are furtherest away (aphelion) could be experiencing the equilivant of more extreme winters than I described above and those closer (perihelion) could be having more summerish conditions. Again this would be banded, and leave isolated pockets on your planet experiencing different conditions along the same latitude. Some regions having a milder winters and summers while others are having stonger winters and summers.

**As noted by other answers, you may need to move the planet's orbit a bit further away from the infinite sun. It would be a bright beam of light running across the entire length of the sky and not just an isolated disk.

fyi: This would involve your planet crust and mantle being more 'malleable' than a normal planet consistency. However, you have an infinitely long world orbiting an infinitely long sun while always being parallel to each other. You can work in some malleable planetary physics. :)

The planet's orbit around its sun is strongly elliptical. When it's farther away, it gets cold enough to be winter and when it is near then it is summer.

An infinite Cylindrical Moon (CM) would do.

This Moon would behave differently from our own.

Notice that CM does not have to be constrained by the same lunation period and apparent size in the sky as our own round Moon. It may have a longer lunation, and a smaller apparent size... This way, it will never cause an eclipse, thus there is no eternal night during the New Moon phase. 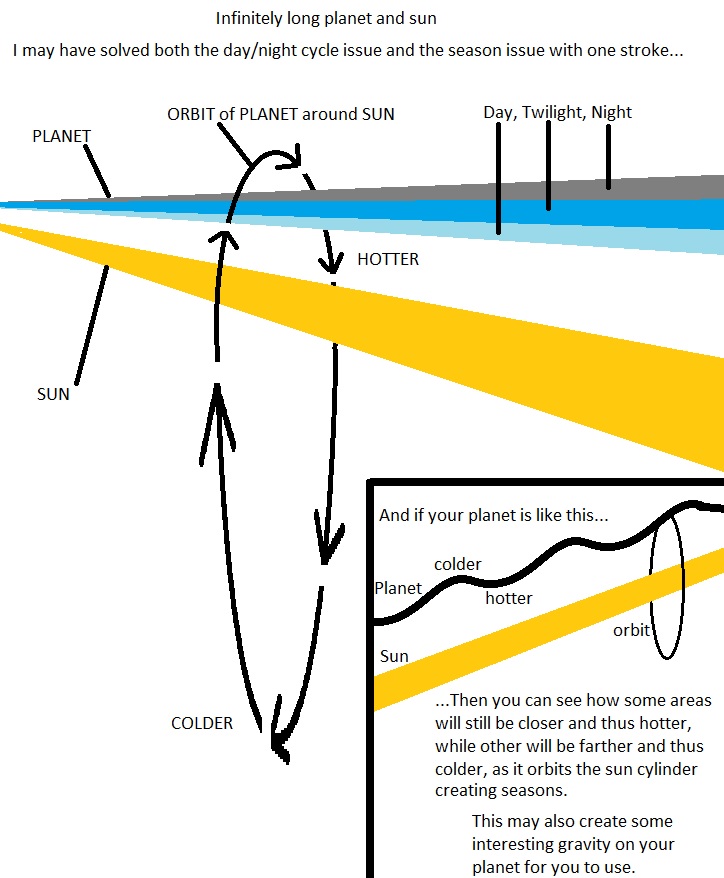 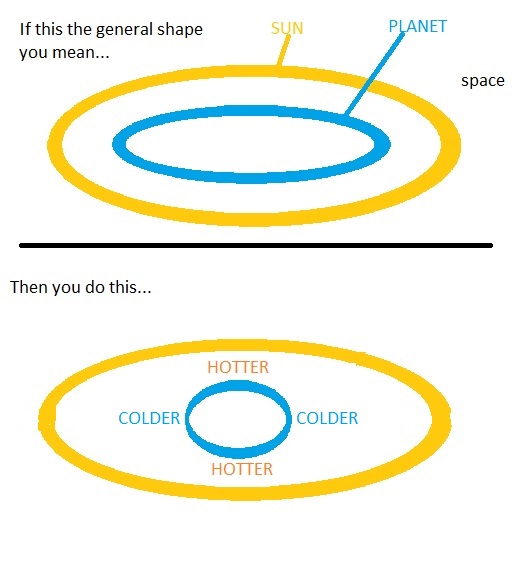 As for day night cycles Larry Niven solved that problem in Ringworld. I don't like his solution, but it works. Check it out.

Lets say north and south are along the length of the cylinder, and east and west are around it. Standing on the planet, looking east and west would look just like earth, with the horizon dropping off a few miles out at sea level. Looking to the north or south, though, you would see triangles angling out to a single point. From above, the infinite line of the sun would stretch out out to that same point. Looking east at dawn, you would see the line of the sun suddenly emerge from the entire horizon at once, before proceeding on it's daily arc overhead.

On Earth, the sun takes up about 0.5 degrees horizontally. This sun would take up 180 degrees. If it puts out similar energy per surface area, this means it would have to be about 300 times smaller vertically to avoid roasting the planet, or about 6 arcseconds. This is incredibly small--it would be the same size as a 6cm diameter cable viewed from a distance of 2kms. Still, it is about 8 times larger than the largest stars, so with how bright it is, it would still be quite visible (but not so tough to stare at, since you could only see a portion of it at a time).

On this world, gravity would have to not act in one of the 3 dimensions (along the length of the cylinders), or you would be spaghettified by the infinite mass at either end of you. The distance between the sun and planet would always be the same along the entire length (definition of parallel), so if the sun was uniform, then although there would be a night/day cycle, then all parts of the world would go through the same seasons at the same time, as the cylinder moves in an eliptical orbit closer and further from the sun at all points at once. And all parts of the world would have an identical climate.

The only way to have different seasons is if the sun grows hotter and colder at different points along its length. Places below the cold spot would shift to winter, then back to summer when it warms up. Or the hot and cold spots could be fixed, and the sun could be moving lengthwise relative to the planet. In this case, if you heard word that the people north of you just had a long hard winter, you know that you're getting that long cold spot next.

Not the answer you're looking for? Browse other questions tagged planets physics space seasons or ask your own question.

39
Planet wide seasons: Possible?
9
A Planet Where The Four Seasons Occur Multiple Times In One Year?

7
Planet with infinite overlapping surface on an axis, problems of the concept
7
Is this circumbinary planet set up in a stable manner?
0
A planet with radius 128 km: ocean
1
Is this model possible? Fast axial precession + tidal locking
2
How bright does this planet look from its neighboring planet?
10
What is the maximum orbital time for my moon around my planet?
11
How long would this eclipse last?
10
What would seasons and daylight be like if the Earth was on an eight-shaped orbit between two stars?
3
How plausible is this planetary system with binary stars?
6
Could an Irregular Orbit Cause Significantly Longer Seasons?