How could a technological society exploit an absurdly strong, permanent magnetic field?

In a previous question on this site I asked about the side effects of a having ludicrously strong, permanent, static magnetic field on the surface of a planet, capable of pulling in non-magnetized ferromagnetic objects from a distance of many miles. Now, the world I have in mind has technology equivalent to Europe somewhere around 1300-1600, but I'm curious how a hi-tech society could take advantage of that field. For instance, could you put an electromagnet on a spacecraft, and use the magnetic pull to achieve escape velocity? Could you set up power stations inside the field (not too close to the center!) and generate electricity? Some other obvious exploit?

Hope the question isn't too broad, and that it's acceptable to pose a question that isn't immediately of use to a story; happy to revise/close if it's a problem.

EDIT: To be clear, I'm looking for ways to exploit the magnetic field using modern knowledge and technology; the Renaissance period specified above is just for background. Based on the answers to my other question, some really wacky things start happening as you get close to a magnetic field that strong--I want to know if any of them would be useful.

Something that pulls metal from that far away combined with a medieval/renaissance society? Torture, Prison, and maybe Hell come to mind.

As a gross over-simplification, in societies of that era especially the early end: magic was still a possibility, religion was a given, and science was quasi-heretical if you didn't agree with the local religion or offended someone important.

Remember the Rack? Arms tied at one end, legs at the other, and the victim was slowly stretched until something gave way. With a strong magnetic field of this nature, you simply need to anchor the person at one end, and attach some metal to the other end and let them hang. Sideways. Bonus points if you provide feathers.

Just encase them in metal, or give them metal boots and gloves and let them go. They won't be coming back. Think of a long walk off a short pier with concrete boots... only with metal and magnets!

Given the strength of that field, you get close enough, it might be able to pull the metal out of one's body, such as blood. Should that be the case, then you have a good candidate for the "Yellow Springs" to borrow an Asian metaphor for Hell. Anything which could slay a person invisibly by sucking the blood out of one would very likely give rise to the notion of demons and Hell, if they didn't already have the concept from mythology and/or religion.

As an added bonus, it would definitely interfere with birds and other creatures which rely upon geo-magnetism.

As another thought, once they discovered electricity, and the relationship between it and magnetism, you have the makings of an engine core.

Get a hula hoop, stick some cylindrical magnets into it (if your society has 1600's tech they can figure something with lodestones). The point is that the magnets should be aligned with the circle, like this: 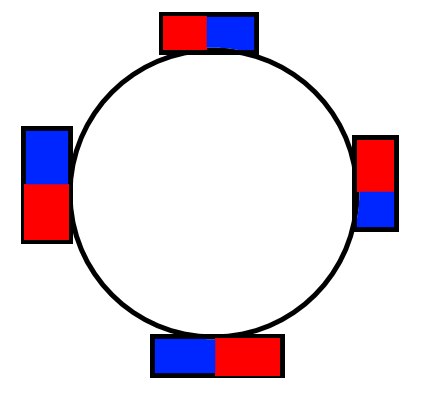 Take it to the insane magnetic field. Stick it to a structure through the hub someway, keep the circle standing vertically and aligned to the magnetic field. If it hasn't started spinning like crazy yet, give it a good, solid kick.

You've just got yourself a magnetic mill. You can use it to grind grains and stuff.

Not the answer you're looking for? Browse other questions tagged science-based science-fiction magnetism .

26
What would be the side effects of a massive, strong magnetic field?

1
Creating a stable split earth
4
Can there be planets with extremely strong magnetic fields?
9
How to protect human colonists from Red Dwarf flares?
11
How would a planetary ring react to a magnetic field?
13
Liquid water on both sides of a tidally locked planet. Feasible?
1
How big/how many permanent magnets would it take to create a good Martian Magnetosphere
26
What would be the side effects of a massive, strong magnetic field?
18
Can lodestones be used to magnetize crude iron weapons?
3
What (if anything) can cause a substantial and stable shift of the magnetic poles of a habitable planet away from its geographical ones?