What shape would the eggs of a species of oviparous humanoids be?

Eggs are common enough that you'd be hard-pressed to find someone who hasn't seen one. While birds' eggs are often thought of more frequently, a wide variety of eggs exist and are in use by various species around the world.

However, something worth noting is the shape eggs take on in relation to the parent species and environment. True spheres have no strengths or weaknesses because the pressure applied to one point is distributed evenly across the surface of the object. As anyone who's seen even the roundest eggs will tell you though, eggs are not true spheres. In fact, what most people think of as eggs are more oval in shape. This is believed to prevent them from rolling away--which would occur with truly spherical eggs--while also making it easier to get the eggs out of the body because of the tapered end at the top. However, this phenomenon is not often observed in species that nest in holes or other cavities, whose eggs tend to be more spherical, though this most likely has to do with decreased risk of rolling away in a closed area.

With that in mind, I am looking to determine the shape of the eggs that would come from a species with the following traits:

The reproductive method is thought to be something resembling a cloaca, but alternative methods are welcome. The color and size of these eggs are also not a required part of the question, but if you feel you can tackle those as well, have at it.

Here are some crocodile eggs: 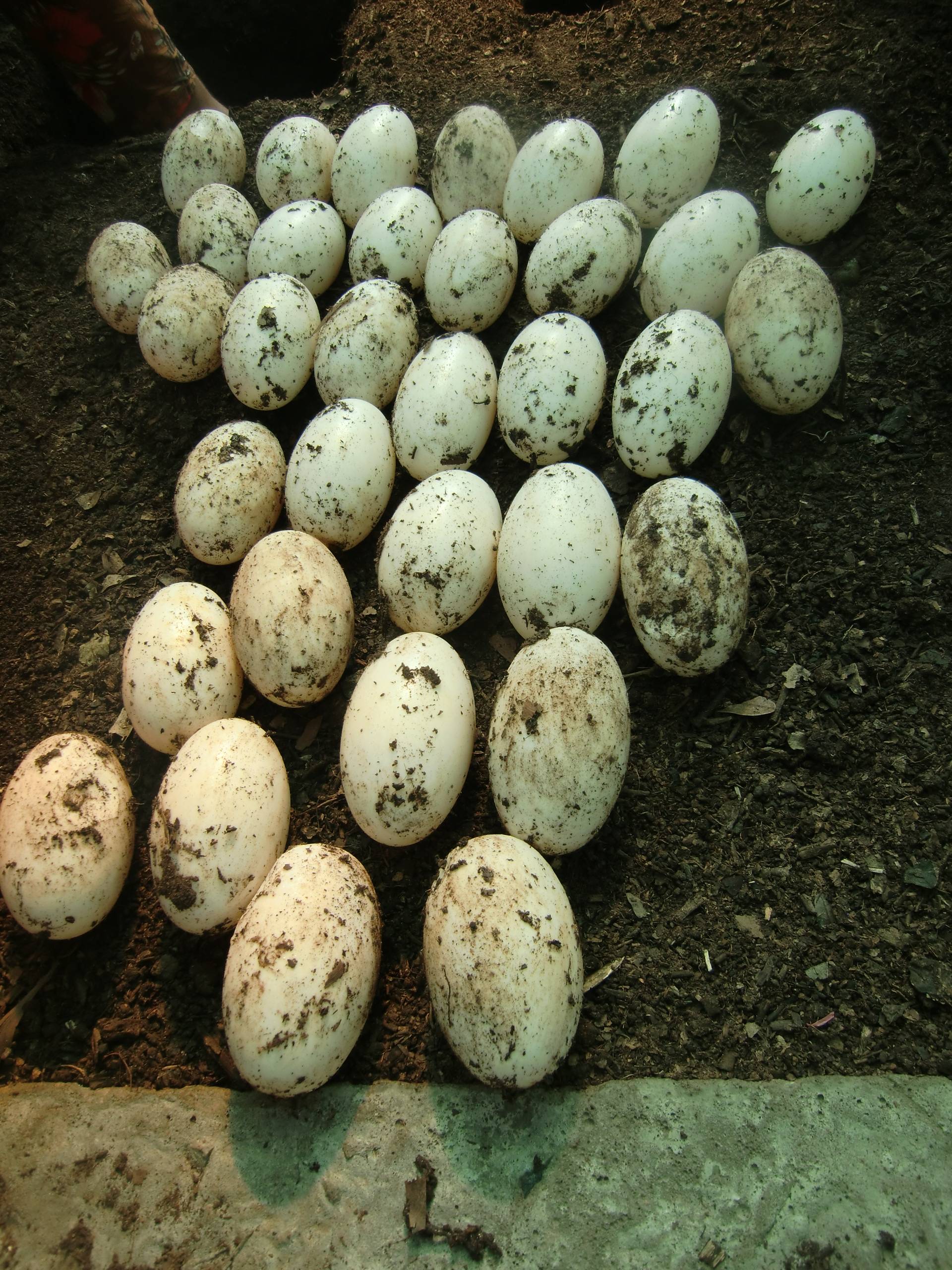 And some komodo dragon eggs: 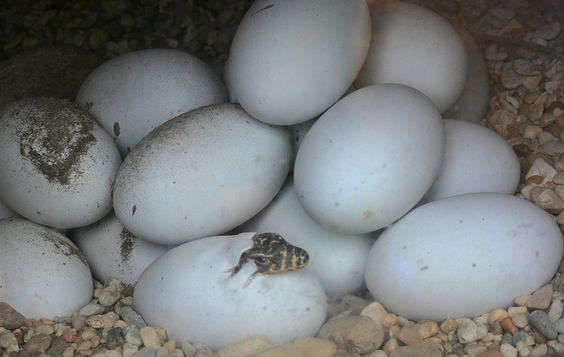 That's because a humanoid being will have to lay these eggs much like a woman would give birth. A round, symmetrical shape would have to be small in order to get out of the mother. An elongated shape allows for more volume to be kept inside the mother's body while keeping the same width, which allows for larger eggs. That, in turn, allows for more yolk, which allows for larger babies being born. If the creature is humanoid and the babies are too small, they will be like humans going through premature birth, so you want those eggs to be as yolk-rich as possible.

Because that's what eggs are.

So other than walking on the soles of the feet (plantigrade), humanoid & clutch size, an Ostrich.

Other than hole nesting (which as you point out has implications for the egg not rolling away & the necessity (or rather the lack of any) of shapes that avoid that) your criteria have no implications for egg shape (well not much worth speaking of).

Typical clutch size can have some implications for the potential size of individual eggs, but not really for shape (if you only lay one egg you can put more resources in it).

It's not one of your criteria but the size of the birth canal (or whatever we call the bit an egg passes through) does have implications, you're laying one egg at a time so you'll want to put as much into that one egg as you can to allow for larger better developed offspring with the best chance of survival at hatching & an oval shape will allow a bigger egg to pass through the pelvic bones.

Other than that it will conform to the rounded oval structure of most eggs (simply because a sphere provides the most strength for the shell, & an oval is the closest you can get to that while allowing it to be longer than it's wide so you can have a bigger egg for the size of the pelvis).

The same as many other eggs it might be a little thinner at one end so it will roll in a circle instead of rolling away (just in case it is ever out of the nest hole).

The long & the short is that nature has had a long time to perfect the design & barring a very few outlying examples has chosen much the same design for almost every egg laying species eggs..

So it will be (really big surprise) egg shaped, meaning a slightly asymmetrical oval.

First some basic considerations. The human has to stop using urea for excreting nitrogen It has to switch to uric acid otherwise the egg will be the size of an SUV to contain enough water. hard shelled eggs take up more space than the offspring in passing so females need much wider hips.

Shape, you have several shapes to work with for hard shelled eggs: ovoid/elliptical, elongate, spherical, or tear-drop. see examples in image. A human fetus will fit best in a ovoid/elliptical egg or weakly teardrop egg with the least wasted space (and thus least unneeded egg width) so one of those is the most likely shape. Ostrich sized is not a bad ballpark if you go th egg laying marsupial route, based on human infant survivability. 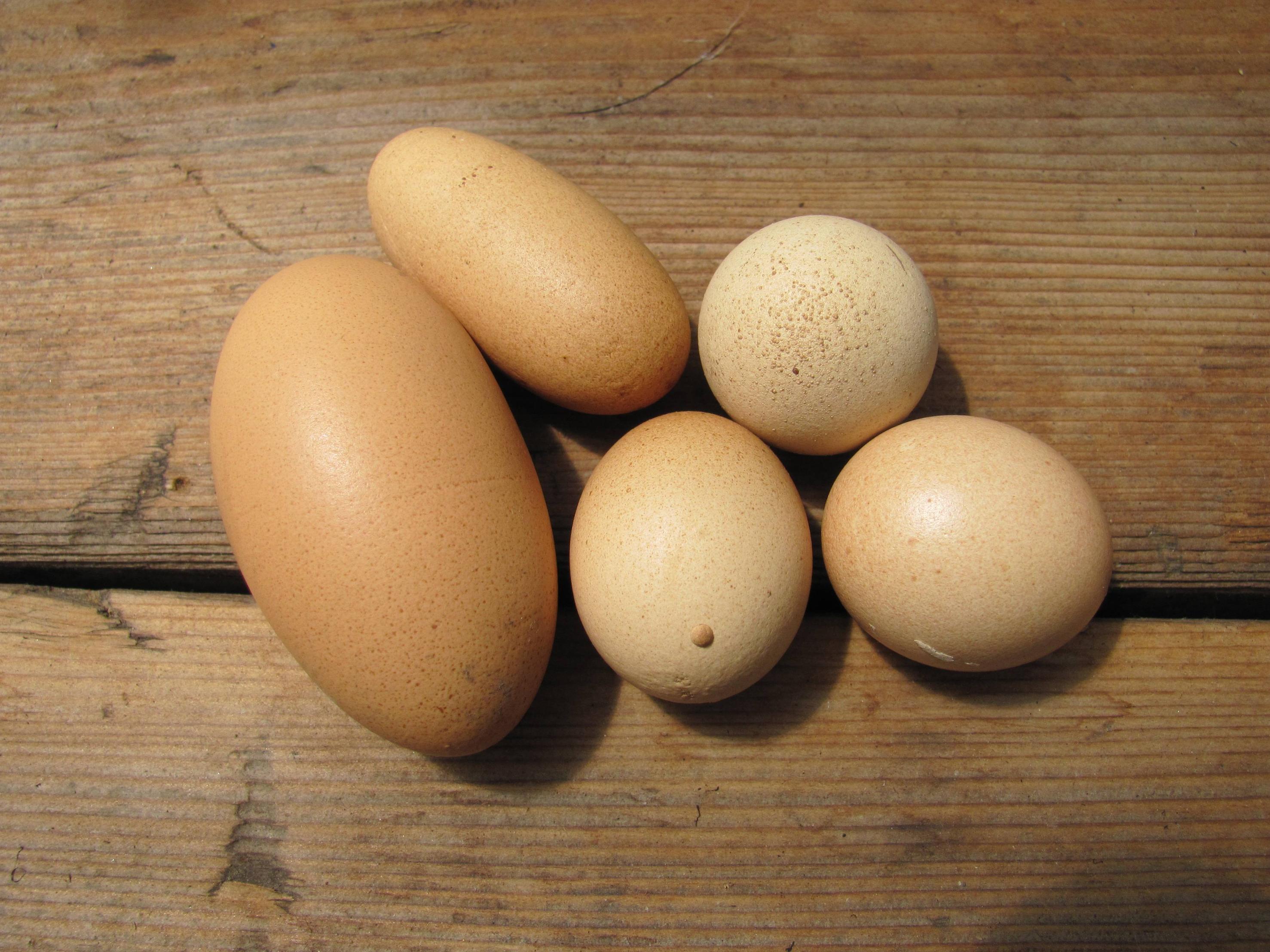 The kicker and why it will not work. However mammals produce well developed offspring which need more calories. Humans are particularly egregious and consume a tremendous amount of calories in the womb, around 84,000 calories (~300 calories per day average times 280 days). And becasue much of it is going to the brain much of it has to be protein and carbohydrates. Eggs have a calorie density of about 1.44 calories per gram so that is about a ~ 58 kg egg, to compare an ostrich egg weighs ~ 1 kg, that's a big egg, larger than the person laying it in many cases. Bigger proportionally than a kiwi egg, the largest proportional vertebrate egg (see image). So it is just impossible, mammals evolved to feed far more calories to their offspring than an egg can contain.

Even if you use a far more conservative estimate and half the size of the egg that is still far to large an object for anything like human anatomy to have room for. Your best bet is something like an egg laying marsupial with a pouch to feed, support, and protect an underdeveloped egg produced offspring which will be far less developed than human offspring, which are already rather helpless as placental newborns go. 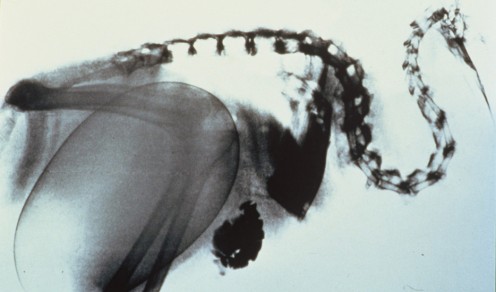 Of course on an alien world with alien biology it might be possible you just need egg with a much higher caloric density and higher atmospheric oxygen to allow for larger eggs.

Not the answer you're looking for? Browse other questions tagged biology creature-design reproduction or ask your own question.

4
Why would my advanced Dragon society forbid their young adults to engage in sexual activities
8
Is there a way for human-sized oviparous humanoid mammals to produce young in eggs without going the full marsupial route?
15
How could a female member of a species produce eggs unto death?
39
What could a reptilian race tell by candling their eggs?
6
Foraging behavior of a forest slime
3
Feasibility of Chomping Egg
1
Feasibility of Chomping Egg Evolution
6
How long should an egg-laying species of human size and intelligence gestate and incubate its eggs?