Everything alive in the world dies this instant. Without bacteria to decompose anything, what happens to the remains? What does this look like?

So when I say everything, I mean everything. Humans, animals, plants, fungi, bacteria, all dead. If the bacteria and other detritovores and decomposers can't decompose anything since they themselves are all dead, what happens to all the carcasses and remains of the life?

Do these remains decay through other inorganic means? What do they look like throughout this process? And how long would it take?

(For the purposes of this question, let's just say that Viruses and Prions count as "alive", they are "killed" in this scenario as well) 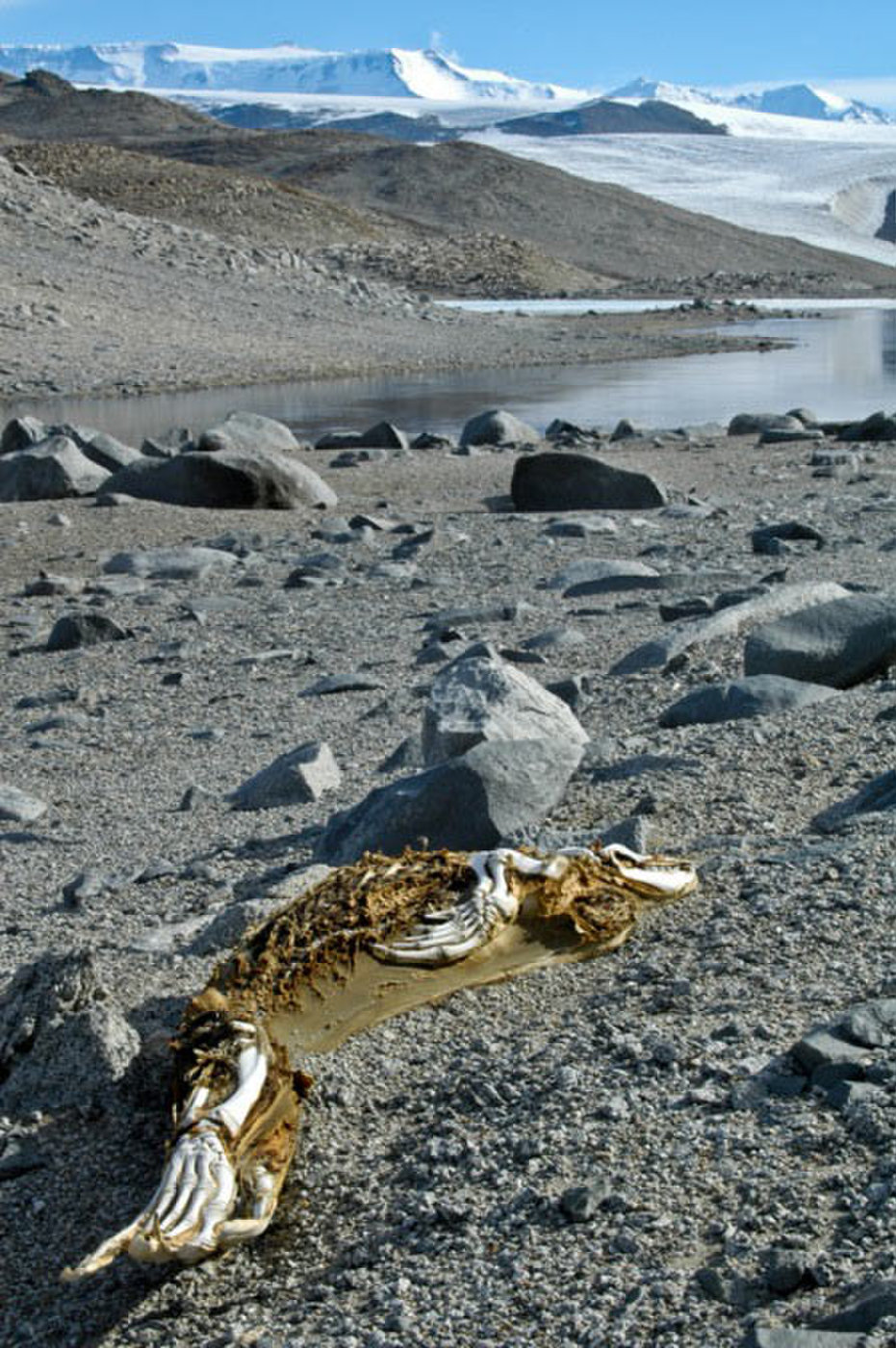 The mummies weather in the elements. UV radiation breaks down tissue. Wind and windblown grit wear it away. It is much like what happens to wood left outside in a dry environment.

In a world without scavengers, fungi or microbes, these processes would be what gradually took away the remains of the world's life. I do not think warm circumstances would matter as much in the absence of life. Wet would matter but much less than it does when there are fungi - the water would carry away degraded bits as the rain washed the mummies - so they would vanish faster than these seal mummies in the dry valleys.

The remains would mummify, petrify, erode, and eventually become just another mineral layer.

There wasn't much specification regarding the timeline or location, so the below are just the general process that will occur over a long period of time.

Mummification: In particularly dry areas like deserts or mountain peaks, the remains would mummify, much like this creepy fellow. Even with regular decomposition mummification can still occur naturally, so without scavengers and bacteria getting in the way much of the life in dry areas would desiccate and mummify.

Petrifaction: In areas with water, the remains would petrify. Water would leak into the pores of tissue and bone, and minerals within that water will precipitate out and saturate the remains, resulting in a combination of organic and inorganic remains. This process is called permineralization, and is the reason we have dinosaur fossils. Without bacteria, the soft tissue remains would also go through this process and become fossilized.

Over time, much of the organic remains would slowly be dissolved by water and replaced by minerals, in the uncreatively named process of replacement. Unless the fossilized remains reach a dry area, they will eventually lose all of their organic components and be no different from oddly shaped rocks.

Erosion into Mineral Layers: As explained above, the organic material in the remains will slowly dissolve and be washed away by water(and probably other chemicals). The dissolved bones, shells, beaks, and corals of the trillions of dead will pile to form layers of limestone, rainforests will turn into vast swaths of coal, fossils and mummies would be formed in amounts to put previous extinction events to shame, and the swarms of dead ocean critters won't even get to become oil without bacteria. If given enough time, even the petrified and mummified remains will erode like an other rock, leaving little evidence of life except layers and veins of organic minerals.

Unless you totally destroy all proteins everywhere, I'm going to bet that some of the very simple forms of life will find a way to recombine after 'death', and rapidly turn the earth into bacterial soup. Most theories of the beginnings of life involve rogue proteins teaming up to eat other stuff, and I suspect some simpler single celled organisms would spontaneously do this right away, given the incredible abundance of defenseless, energy rich raw material all over the place.

Things would still decompose, but maybe not as fast, dependig on environmental factors. Enzymes and other chemicals found within the (now dead) bodies (or whatever remains) would break those down. Then of course there is heat degradation. And depending on environment (again), interaction between chemicals from both the remains and the environment. And then there is weathering.

In addition to @Giter's excellent answer, there is another destructor of life remains on land:

Wildfires will not only burn down the dead forests and grasslands but also consume almost all the corpses lying on the earth surface. The ashes will be dispersed by the wind and deposited somewhere, forming a faint geological mark of the end of life as we know it on earth.

Well, kind of. I am assuming "everything alive in this world" means to a certain height above the earth, probably to the generally accepted limit for our atmosphere. We know for a fact that there are organisms hanging out on most if not all of the sundry items we have put in orbit around our planet. As those deorbit, some of those organisms will probably survive, and start feasting on the lovely food laid out for them on the planet below. It will take some time, but they will likely dominate the earth.

This is only a partial answer.

Lifeforms contain many different types of chemicals/compounds. Some compounds are fairly volatile and would break down by themselves into simpler chemicals after a short time (hours/days). The stomach acids of animals would partially break down the body until they were too diluted to be effective. Some compounds would dissipate, such as water and oils in a dry environment. If the remains were in water, they would absorb water until an equilibrium was reached.

The more active the environment was, the more weathering would have an effect. After a short time, exposed remains would be subject to erosion and buried remains would be subject to fossilisation. Note that generally speaking, fossilisation is hard to achieve because so many factors have to be present at the same time, although with no life to consume the remains there would be a slight increase in burial events.

Any remains in cold areas would be preserved longer than in hot areas because heat accelerates chemical reactions.

CJ Dennis is heading in the right direction. Chemical reactions keep happening, and life catalyzes some of them more than others.

There would presumably still be lightning strikes, and eventually most of the dead forests and dead grasslands would be burned to ash. The existing coal mine fires would continue until they got buried or soaked. The main reason the CO2 level in our atmosphere is so small is that plants keep removing CO2. So CO2 levels would rise. But there isn't enough biomass to bring oxygen levels down very much. I think.

Volcanoes and hydrothermal vents release sulfur gases and ammonia. If they weren't metabolized what slower chemical reactions would they get?

It's hypothesized that the atmosphere used to be anoxic, and life created all the free oxygen. Maybe we could eventually get back to that? I don't think the numbers add up on it, I think there's far more oxygen than carbon biomass, but I could be wrong. Still, whatever equilibrium it approached would surely have much more CO2. It might have less N2 and more other nitrogen compounds, or maybe not. Nitrogen compounds are heavily metabolized and N2 is a low-energy form that some bacteria produce when they extract energy from other nitrogen compounds.

Would we get a big greenhouse effect? I'd expect so.

Pretty much everything that's biomass now would eventually get oxidized. The earth would have a very different climate, but it wouldn't be easy to predict just what it would be like. One reason to think it wouldn't just slip back to what we had before life changed it so much, is that the earth is not nearly as hot now.

This happened on earth several hundred million years ago: lots of oil fields will form.

This already happened in Earth's history

This question has a very simple answer. Read this article:

That is what would happen.

To summarize in case you did not read it:

There was a time in Earth's history when, for millions of years, you had trees that lived and died but there was no bacteria that could decompose them. This was because the trees evolved before the bacteria that broke them down.

What happens is that you get dead organisms piling on top of each other and crushing the earlier dead ones underneath. This compresses them into various natural resources that we use today (or in your case future intelligent species might use). You also get spectacular forest fires that last years or decades as there is just so much fuel to burn once a fire starts.

Adding a few dried up dead animals to the mix, I'm sure, wouldn't be any different than the piles of dead trees that existed in the past.

So what would you get? Oil, diamonds, fires, and some other resources.

The large coal deposits of the Carboniferous may owe their existence primarily to two factors. The first of these is the appearance of wood tissue and bark-bearing trees. The evolution of the wood fiber lignin and the bark-sealing, waxy substance suberin variously opposed decay organisms so effectively that dead materials accumulated long enough to fossilise on a large scale. The second factor was the lower sea levels that occurred during the Carboniferous as compared to the preceding Devonian period. This promoted the development of extensive lowland swamps and forests in North America and Europe. Based on a genetic analysis of mushroom fungi, it was proposed that large quantities of wood were buried during this period because animals and decomposing bacteria had not yet evolved enzymes that could effectively digest the resistant phenolic lignin polymers and waxy suberin polymers. They suggest that fungi that could break those substances down effectively only became dominant towards the end of the period, making subsequent coal formation much rarer.

9
Surviving for a year after everything dies
4
Modern Landscape Lacking Wood Decomposers
5
How long/in what condition would a corpse last in a totally irradiated, unsealed environment?

13
How can I successfully prove magical link?
0
Let's paint the world with bacteria
10
How long would it take for an array of introduced alien fauna to form functional ecosystems on a near-future "Dead Earth"?
7
Would Earth plants grow in an alien environment?
31
In theory, could all mammals be wiped out by a single pathogen?
4
How Would Organic Material Erode If Petrified
6
Could my fungus exist naturally?
5
Are dead tissues easier to preserve for extended period of time compared to living organisms?
1
Tunnelling Spores in Asteroid Belt
6
Can life exist with rigid cell membranes?