Projectile that crystallizes a target

Can arrow heads containing certain substances cause skin and flesh to crystallize, giving the impression of the target being frozen?

Do such substances exist?

So, freezing targets is actually rather hard. Setting them on fire has of course been solved half a dozen ways already, but there's no real-world option using current technology that can freeze a target.

Pretty much, you have two options for how to do this:

The first option is easy if you don't want the target to freeze (airguns and cap guns can easily fire projectiles made of ice, though it's bad for the gun and you get horrible effective range), but gets really difficult if you want some clearly visible damage from the cold. In practice, for this to work, you need to find a very good thermal insulator that can be made to rupture, disintegrate, or shatter on impact despite the very low temperature. In theory, an aerogel with a very low porosity might work for insulation, except that aerogels are insanely durable, so getting it to come apart on impact is likely to be very difficult, and eve with an insanely low porosity some of the chilled substance will leak out. In addition though, most substances cold enough to cause instantaneous frostbite will evaporate or sublimate instantly on contact with the heat from human flesh (this is why it's possible to safely 'drink' small amounts of liquid nitrogen), so you would have to deliver a very large amount to cause any actual drop in temperature.

The second option is actually rather hard if you want near instantaneous effect. Most strongly endothermic reactions are not spontaneous (you have to keep putting in lots of heat to sustain the reaction), so they are immediately out of the question. Of those that are spontaneous, the most common examples involve dissolving various salts in water (disposable ice-packs usually work this way), with various salts of ammonia being common (ammonium nitrate and ammonium chloride being good examples you can easily test yourself).

Now, if you just want a visible effect similar to ice formation, that should actually be somewhat easy provided you don't care about the target not reacting like the are frozen. There are all kinds of chemical reactions that will spontaneously produce crystals, you just need one that will produce a white precipitate, which is actually insanely easy (most chemical compounds are white, black or some shade of grey). Barium nitrate and sodium sulfate is an easy example that will give you small powdery white crystals which will then stick to the target because of moisture.

Make the arrowhead out of Ammonium nitrate.

The arrowhead needs to be about 20 grams for every .1L of freezing.

This means you need a 8000g for a whole body, or 8kg which is a really hefty arrow, you're looking at more of a ballista to fire the arrow. That said, that's if you're looking for whole-body freezing. Having the pierced point freeze will deal significant damage. For example, if you hit a non-vital part of the torso, the ice could very quickly form in something vital as well as freezing around the wound and causing severe frostbite. Not a bad combat tactic if you really hate your enemies.

Ammonium Nitrate has an extreme endothermic reaction on contact with water (which humans are mostly made of). That means it sucks up all the heat. This is what they use in those cold packs that you 'pop' and they turn instantly cold.

I don't think such a thing has ever been done before.

In order for an arrow to provoke freezing upon a target's skin, it would have to either contain chemicals that react in an extreme kind of endothermic reaction, or some fluid that crystalizes when reacting with the atmosphere. This makes arrows a poor choice for a delivery medium. Arrows are made for speed and piercing. You need a flying, explosive bottle.

But if it must really be an arrow, because some mad scientist just wants to build a weapon that belongs in superhero comic books... You could try liquid helium.

Liquid helium is a superfluid. Since the whole thing is about being cool rather than being effective, I will not bore you with the fine chemical and physical details. This is an excerpt from XKCD What if nº 50:

(...) But helium has a trick. When cooled below about two degrees kelvin, it becomes a superfluid, which has the odd property that it crawls up and over the walls of containers by capillary forces.

It crawls along at about 20 centimeters per second, so it would take the liquid helium less than 30 seconds to start collecting in the bottom of your boat.

This would, as in the liquid nitrogen scenario, cause rapid death from hypothermia.

You would need a quiver cooled to two degrees Kelvin above absolute zero (I'll let you figure out how to do that). And you would need to shoot the arrows really fast. But if they are covered with liquid helium, when they pierce someone the liquid helium will start crawling through their skin.

I have made some calculations, just because. An adult's skin is around ~1.5 to 2 square meters wide. Let's say 2 meters because it's a round number. Helium has a density about $ \frac {1}{8} $ of water's. So to cover a big person's body with a half-millimiter film of crawling liquid helium, you would need:

Your arrow head would have a volume of one liter (think of a small bottle of Coca-cola) and would weight 125 grams (approximately a quarter pound).

Your bow and arrow setup would look like an Airow Gun, only the arrows would be somewhat bigger: 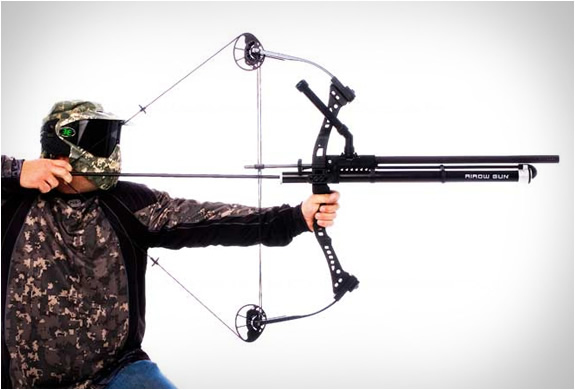 And yes, that is an ink delivering arrow used in paintball. Because some people care more for looking awesome than for being effective.

Of course, you could reduce the payload on the arrow if you only want to freeze a limb.

Actually there already is a knife with similar (freezing internal organs) gimmicks. Its called WASP Injection Knife and it works by shooting 24g of CO2 into its prey. In their own words:

"This weapon injects a freezing cold ball of compressed gas, approximately the size of a basketball, at 800psi nearly instantly. The effects of the compressed gas not only cause over-inflation during ascent when used underwater, but also freezes all tissues and organs surrounding the point of injection on land or at sea."

I'm not really sure how to transfer this effect to shooting projectile, but I hope that having at least a stepping stone from the real world will help.

To actually freeze the target, the target needs to be small, because the temperature loss is achieved over the surface, and the surface roughly scales as the square of the size, while the mass (or volume) holding the energy that needs to be dispersed to achieve lower temperatures scales as the cube of size. If A is double the size ($*2$) of B, Then A will have roughly four times ($*2^2$) the surface and eight times ($*2^3$) the mass. So it will hold eight times the energy, but have only four times the means to loose it. Flash-freeze a mouse? Easy. Flash-freeze a human? Very hard. Flash-Freeze an elephant? Nah.

Next problem: Creatures are mostly water, and water holds just about the most energy per degree of temperature of any substance. So if you splash 1 litre of $0°C$ alcohol on 1 litre of $10°C$ water, you don't get drink at $5°C$, but one closer to $10°C$. So the best would be to douse the target in $-200°C$ water - problem there: ice does not mix well. You hit the target with a block of super cold ice, the ice will melt on the surface, but the whole block won't come into play.

Next problem: Thermal energy does not just up and leave. It takes its sweet time, depending on the material - in copper it can really flow, while in styrofoam it only trickles. These differences in conduction are the reason why copper is used in processor-coolers, while styrofoam is used in insulation. Water is not a great conductor of thermal energy, which is why by licking a frozen metal-tube one only gets stuck, and the tongue does not freeze through - the energy is produced faster than it can exit the tongue.

You transfer thermal energy by

You can actually source or drain a lot of energy in phase-changes (water/ice, water/steam) so liquid air would be a decent energy drain,but there is just no way to get the energy out of the human body fast enough (and the needed volume of liquid air would strain the meaning of "arrow")

You notice the answer comes back to temp-difference a lot, so if your creatures were more of the liquid-stone persuasion, something could be arranged...

But i gather the question to only be about the impression of freezing, and i will further posit it is not the impression of the victim (which yould be more of a question about psychoactive compounds) but the impression of bystanders that is to be achieved. If we further have a "victim",i.e. an in-the-know coconspirator as target, we might get somewhere: douse the victim in paraffin near its crytallisation-point beforehand, and then fire a projectile of powdered frozen CO2 - there should be a nice cold cloud, and some bona-fide white crytalline stuff forming on the hit surface of the victim, who will suddenly cede movement with the hit parts. Might fool somebody.

If you are willing to handwaive away the issue of storing the chemicals and making sure it stays cold, you could freeze areas of skin via the use of liquid nitrogen. I'm envisioning one of the following.

Not exactly sure how you're going to keep the liquid nitrogen under -196C however.

Not exactly SubZero level of freezing people, but with the size limitation of arrowheads. It is not too feasible to drop the temperature of something super quickly with very little exposure time.

Not the answer you're looking for? Browse other questions tagged reality-check weapons chemistry science-in-society biochemistry or ask your own question.

6
How to make a 'freeze' weapon work?

7
Could a virus be genetically modified to target a specific human population?
8
Razor-tipped arrows?
70
Mineral that explodes when cooling down
20
Real-life substance that causes humans to behave similar to Zombies
15
Chemical weapon to kill a werewolf
0
What mechanism would be needed to contain and inject super-heated plasma into a target?
8
The Biology behind a slime that uses hydrofluoric acid to disable and digest prey.
20
What kind of "fog" could be harvested (and processed) for fuel?
10
Substance that changes quickly from liquid/gelatinous to solid?