My Keplerians have no faster way of migrating than on foot. I mean sure, some have wings and can fly but there is a limited carrying weight and flight is rare among Keplerians. Also no animals have been domesticated yet so no, horseback isn't an option.

Okay with that out of the way I think this kind of formation would be best: 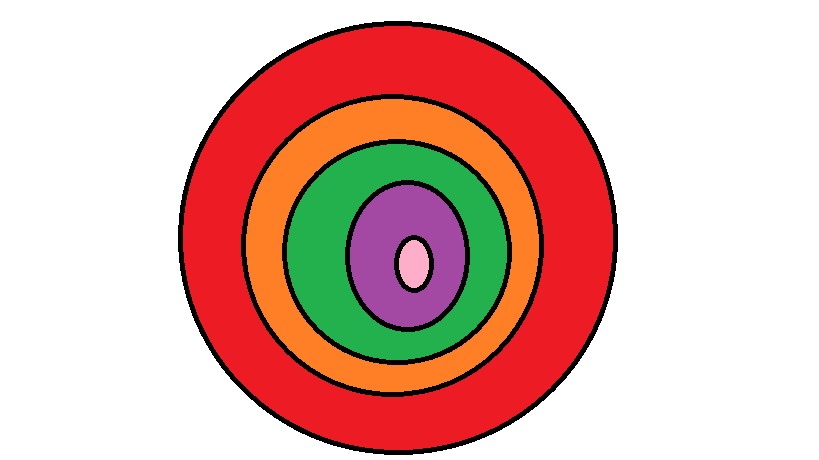 With variations in shape depending on whether or not it is in a body of water, an open area like a grassland, hills and mountains, or a forest.

Here is the structure from the inside out:

Moms and babies would be in the pink area. Children would be there until they are 5 years old and can go into the green area.

Pregnant women would be in the purple area. They aren't as vulnerable as moms with their babies but are pretty vulnerable. Women in labor would go into the pink area.

The green area would contain pretty much everyone. Here are the people who would be in that area:

The outer 2 layers would be the defenders with the orange area being secondary defenders and the red area being primary defenders. This is the one that rotates. Here are some situations that would cause rotation:

Would this be the best formation or is there a better one?

This question has garnered a lot of comments and a significant amount of effort to close it. If I had to guess from reading everything, it's because the effort needed to create this much detail on a march is significantly beyond what any group of people of any intelligence or tech level would ever do.

But, the real problem is why are they doing it?

Life tends to follow the path of least resistance unless forced to do something else. From that perspective, people are going to be strung out in a line willy-nilly on more-or-less a first-come/moves-fastest basis. Our own history of migrations (past and present) tend to show that migrating groups can get strung out along miles of distance. After all, people are just trudging along.

Why would this change?

But, wouldn't predators attack the group?

Not necessarily. Earth history suggests that animals (including predators) tend to shy away from humans because they're not a natural part of the surrounding. This would be very true with a migrating group, where the scent and behavior would be completely unknown to the local wildlife. The exception is the one predator who's so hunger he'll attack pretty much anything — but planning for the worst-possible-case example has always proven economically and efficiently foolhardy.

Therefore, this would only change if your world has predators that would attack indescriminately and somewhat frequently. In other words, if there's a reason to push the group together.

Anyone who has hiked as a group through tall grassy areas knows the value of a trail blazer. The trail blazer is the person at the head of the line who's cutting the trail. It can be hard work and is frequently traded off to give people a chance to rest. The reason this is done is so that the rest of the group can walk with greater ease, conserving energy.

Walking in a big group like you describe would be hugely tiresome because the trail is the proverbial thousand times wider than it must be. All those trail blazers must occasionally trade off with rested people, and there aren't a lot to trade off with when so many are involved. People would quickly regroup back into the line as it would be easier and faster.

This behavior is generally even true with areas of low brush, where a single winding trail through (for example) sage brush is easier to navigate than a whole group trying to walk over (or around) so many bushes. Frankly, groups like you describe are only efficient on asphalt and maintained lawns.

And unless your group has a remarkably strong caste system, "defenders" are just the strong (usually males).

Finally, it's actually pretty expensive to dedicate strong backs to defense. Nations can afford that expense, but migrating groups probably can't. Most if not all of the strong men and women will have some kind of armament and would be expected to act as defenders should the situation arise. But, generally, when not taking their turn as a trail blazer, they're helping everybody else along.

You're moving a small community, not a nation or an army. At a guess, everyone would be interrelated and the community would already have formed strong help-each-other tendencies.

The grouping you describe is unrealistic unless there is an outside force acting on the group to keep it in that order. The complexity of the design is unrealistic in all cases. You'd have defenders on the outside, everyone else on the inside. Little or nothing more. A group so large that the complexity you suggest might make sense would be using scouting parties as a primary defense, negating again the need for the circular group.

The grouping they would naturally take without an outside infuence is a strung-out line, with the trailblazer at the front, a few defenders behind him, the bulk trudging along, and a few defenders in the rear. The exception to this would be hunting/gathering parties for food or scouting parties.

I can easily imagine that you're putting the cart before the horse. Rather than building your community's rules and behaviors and then letting the design of this group shake out naturally from the story, you're trying to create the group from an "outside" point of view and force it on the characters of your story. Life doesn't work that way, and your readers will realize that you're forcing the situation.

An important factor here is, why are your Keplerians migrating?

That might affect the answer to your question. Are they nomads, constantly on the move? Are they fleeing a dangerous area to a safer one? Did they outgrow their previous settlement?

Migrating is hard. It exposes the most vulnerable members of the community to predators and environmental hazards that aren't normally a factor at home. Different species have somewhat different approaches to this, so let's look at reasons and examples.

Bison herds are largely freeform in structure. They are separated by gender, and rarely interact except during mating season. The female herd may contain a few males, but bison mostly rely on numbers, speed, and their own innate strength for defense. When the herd runs from predators, like wolves, the cows and calves take the lead (farther from the threat) while the bulls bring up the rear (closer to the threat).

If your Keplerians are nomads, your structure would only work if the defenders vastly outnumber the non-defenders. The green, purple, and pink areas are well-defended but appear to have a much smaller area than red and orange. If the non-defenders are not vastly outnumbered, trying to maintain your structure would result in defenders being spread thin. In that case, it would probably be better to move like bison: individuals can roam about freely, and when a threat comes the members restructure themselves.

Ant colonies actually migrate often, from one site to another, but migration is quick and most of their time is spent in a fixed setting. Since the queen is the most vital member of the colony, her protection is of utmost importance. During a migration, the queen and her young are carried in the middle of the colony, protected on all sides as she is borne quickly from the old site to the new.

If your Keplerians migrate only occasionally and with purpose, your structure, or something like it, is probably what you want. Ants have a distinct advantage here: defenders do vastly outnumber non-defenders. But even if that's not the case in your society, just shift most of the defenders from the "rear" (defined by the direction they're moving) to the front and sides. Keplerians moving from one specific place to another should probably move like ants; the very young, very old, and laboring mothers should be carried so as not to slow down the rest.

Not the answer you're looking for? Browse other questions tagged society humanoid or ask your own question.

5
How to create a world where birth defects are common and where women are still treated equal to men?
25
How would societies be if created and populated only by young people?
18
If no children were born for 40 years, what would be the social and economic impact after births resume?
11
If everyone was cloned and the clones were a foot tall, how would the American government react?
7
Is this reptilian race realistic?
10
Could human beings evolve to have longer gestation periods? If so, how could this be done?
2
Foot roads and separation of groups
3
Ovulation dependent menstrual cycle?