Imagine that, in a thousand years, the star system of Proxima centauri has a planet located in its goldilocks zone that has been terraformed by earthling settlers.

We do not really know what the biosphere of such a planet will be like, so let's assume that it is equal in size, sea/continent ratio, atmosphere, and animal and plant species to the Earth in the 20th century, including the most exotic microorganisms. The only difference would be that it wouldn't have plate tectonics.

Let us suppose that one million human beings live on this planet, in a society that has voluntarily renounced high technology and lives like its ancestors of the year 2020 in a simple, common existence, with satellites and computers, but no nanotech nor AIs. Let's supose they dominate nuclear fusion power.

Would the human species survive? Would any life in Proxima survive?

Do you have a solar shield? 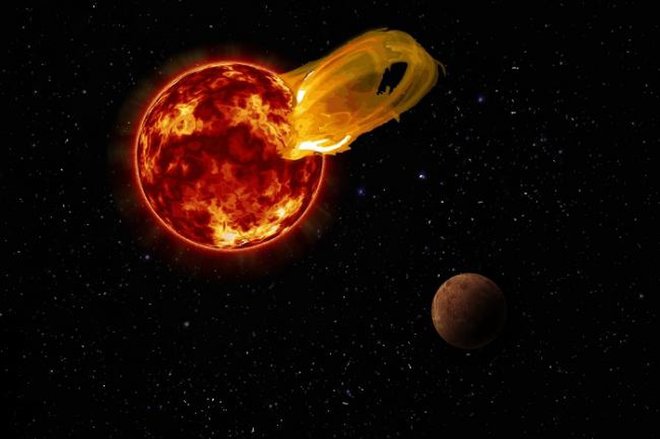 I agree with @RonJohn's answer, here's my take on it.

Red dwarves have epic awful for life solar flares. These flares can instantly make the star twice as bright and smaller ones are nearly constant, causing the solar flares to literally blow the atmosphere away.

Solution? But you know what? If you've built a transparent Faraday cage around the planet, made out of some handwavium that you have recently acquired, you can sidestep that, and the powerful near constant magnetic fields (oh, I forgot to mention that). And, it has to have a transition-lense type stuff on the inside, so that it can deal with massive fluctuations in solar energy. Your civilization can just neatly ignore the "future tech" stuff and go back to living in peace, oblivious of the shield.

We already have possibly discovered a relatively Earth-like planet in the habitable zone.

The exoplanet is orbiting within the habitable zone of Proxima Centauri, the region where, with the correct planetary conditions and atmospheric properties, liquid water may exist on the surface of the planet.

The problem is that it's really close to the star, and gets regular bathed in a lot of solar radiation.

Also from the Wikipedia article:

The habitability of Proxima Centauri b has not been established,[12][13] since the planet is subject to stellar wind pressures of more than 2,000 times those experienced by Earth from the solar wind.[12][25] This radiation and the stellar winds would likely blow any atmosphere away, leaving the undersurface as the only potentially habitable location on that planet.[26]

These analyses reveal that the star underwent a significant flaring event during one of the ACA observations on 2017 March 24. The complete event lasted for approximately 1 minute and reached a peak flux density of 100 ± 4 mJy, nearly a factor of 1000 times brighter than the star's quiescent emission.

So... no terraforming Proxima Centauri b.

According to NASA, solar flares and Coronal Mass Ejections (CMEs) can have serious electromagnetic effects on signal transmission. They use GPS satellites as an example, saying that these flares can cause the satellites to be off by 'many meters'; I would assume that, by extension, other signal-based satellites would be unreliable, including telecommunication satellites, defense satellites, and anything to do with space travel.

Furthermore, NASA mentions that CMEs can produce bursts of particles and electromagnetic fluctuations strong enough to blow out transformers at ground level on Earth. That means pretty much any non-protected electrical system could be vulnerable... Including, given enough of these CMEs, protected systems like that of a nuclear reactor, I would imagine.

The shorter distance means these effects would be greatly magnified compared to a similar CME in our Solar System, and the planet could even experience notable temperature fluctuations (something that is mentioned in NASA's article as not being a threat to Earth because of our distance from the Sun).

Some other effects of these solar flares would be increased aurora frequency/visibility, which could make for an interesting scene on Proxima Centauri b. Also, people like astronauts and airline pilots have increased rates of cancer because they are higher in the atmosphere, which means there is less of a shield for harmful particles. Thus, your planet's inhabitants would be at much greater risk of cancer. For our sun, there are increases in solar flares every 11 years (these are known as a solar maximum). If Proxima Centauri followed a similar pattern, it would result in dramatically increased cancer rates roughly every decade, and by extension there would be many more cancer-related deaths over the year or two after that, which could give some interesting implications on your inhabitant's life expectancies.

I hope this answer helps!

Not the answer you're looking for? Browse other questions tagged science-based terraforming .

6
Can any astronomical phenomenon block/scramble all radio signals from a planet, without making it completely uninhabitable?
37
Can we build a world in 1,000 years?
2
How long could an ecosystem survive without sunlight?
8
The Great Oxidation Event...Artificially Imposed on a Tharn-Like Alternate Earth
3
Minor terraforming that allows people, and doesn't inconvenience local flora and fauna
3
Terraformed Planet
6
What is the minimum viable ecological pyramid a terrafoming project would introduce to world with no life to make it suitable for humans?
2
How to make humans compatible with a high pressure CO2 atmosphere?