What would the psychological effects be on a child who grew up knowing they could never really get hurt?

(This question goes more in depth from a previous question.)

What would the effects be on the child if it's never truly known the consequences of getting hurt? (The child has always healed almost immediately after feeling pain because her parents feel terrible after inflicting the pain.)
When she gets transported to her mindless body, how will she react when she gets injured? Because she's been in the Black Box setting her whole life, how will she adjust to a world recovered from a nuclear attack?

I am not obtrusively trying to give you a non-answer, but psychology is not like chemistry or physics where you can pretty much know that if you do A to B then C will reliably and verifiably happen every time. Psychology is a combined product of genetics, parental behavior, childhood environment, culture, and is also subject to the interpretation of and the psychological reaction of the evaluating party. There are people who were beaten and horribly abused emotionally every day of their lives who grow up into perfectly functional and well-adjusted people, there are kids from wealthy well to do sedate and supportive families who will randomly decide to start shooting meth and mutilating cats at age 25. In psychology, we cannot look at any one thing and say "yup, you spanked yer kid too much and laughed at their Halloween costume when they were 5 so now they're going to have a midget fetish." Psychology just can't do that, it can observe trends and try to isolate factors that seem to have a greater influence over certain behaviors, but nobody on this planet can with any certainty tell you how a person is going to psychologically react to anything.

A wonderful example of these experiments in using psychological warfare. The idea was for a device that dispersed a gas that smelled bad enough to chase rioters away without the harsh and violent effects of teargas. It failed because people's idea of what smells bad is not a fixed thing. People from Japan found the dead fish formula to smell delicious, people from Paupau New Guinea were repulsed by the smell of baking bread, people from India only found the scent of raw sewage mildly annoying, etc etc. What the tests ended up confirming was that you cannot predict how everyone will react to anything.

So in summary, there is no way to answer your question scientifically. Your character can react to this circumstance however you wish to write them doing so.

There is a compelling argument that we have created (or are at least in the process of creating) such a world as this now.

Many societies have now banned corporal punishment in schools and have active programs to address bullying and the like in both an online and school environment. Imagine (if you will) that a specific child exists in a perfectly monitored environment and as such, does not get smacked for a transgression but is given some other non-physical form of punishment. Also, bullies are sanctioned for their behaviour before it escalates to physical violence, and as such neither the child who misbehaves OR the bully feel the consequence of their actions in a controlled environment.

TCAT117 is essentially correct in that there is no hard and fast rule that will tell you what's going to happen in every case, but there are some broad personality types from which we can extrapolate.

For one, the Bully (thinking that he can now get away with his behaviour as an adult and with monitoring not as strict), walks into a bar, picks on the wrong guy and gets beaten to within an inch of his life by that guy's gang.

The misbehaver pretty much ignores the rules of society and walks into traffic. Truck V Human; the human normally gets the silver medal in such scenarios.

I want to stress that this is not a missive extolling the virtues corporal punishment OR letting bullies get away with their behaviour; what I'm saying though is that the reason why schools are a controlled environment is so that children can test their boundaries and get hurt in a way that ensures nothing permanent happens to them in their formative years.

Humans learn by action / stimulus / response pairing. What your scenario (and my hypothetical hyper-vigilant school) both have in common is that remove the stimulus (consequences) of a poor choice. That means that when a child chooses to act in a particular manner, they don't learn what the real world does in response. When they 'grow up' and get put into organic bodies for the first time, THAT'S when they start to learn. The problem there is that by then, their formative years are over, habits from their online existence are already set and the consequences are more severe because their environment is no longer so tightly monitored or controlled.

Let's not mince words; some choices in the new (real) environment will be fatal. Some of those choices could have been avoided if the lessons had been learnt earlier. BUT, everyone will be in the same boat. You'll end up with a society where everyone of a certain age will possess the same shortfall of experience and society will adapt to cater for that.

This is actually now happening in reverse in many advanced economies. Since women have been actively welcomed into the workforce in many countries, child care has become an industry. In Australia, it's a very tightly regulated industry that incorporates early learning / education. In practice, this means that students are entering school far better prepared than previous generations, and children of stay-at-home parents (either mother OR father) are actually at a disadvantage. Many single income families in Australia now actually still send their children to childcare part time before their school years so they pick up the social and learning skills that are being taken for granted in their first years of school.

Ultimately, what you're describing is the point at which experience becomes a bigger factor in learning and development. Today, it starts to happen in child care; in your world, it can be as minds enter the biological world. Either way, if the majority of people start to gain experience at the same time, society adapts to cater for the expectations an increase in (or lack of) experience implies.

I can't say much about her psychology, but there are going to be physical effects on her body. How she copes with these are going to largely be based on how much she's been trained and educated to cope. And how much of that training has been realistic (e.g. she practiced first aid in stressful virtual reality simulations) or academic (e.g. she sat in a calm, peaceful library and read a book about first aid). 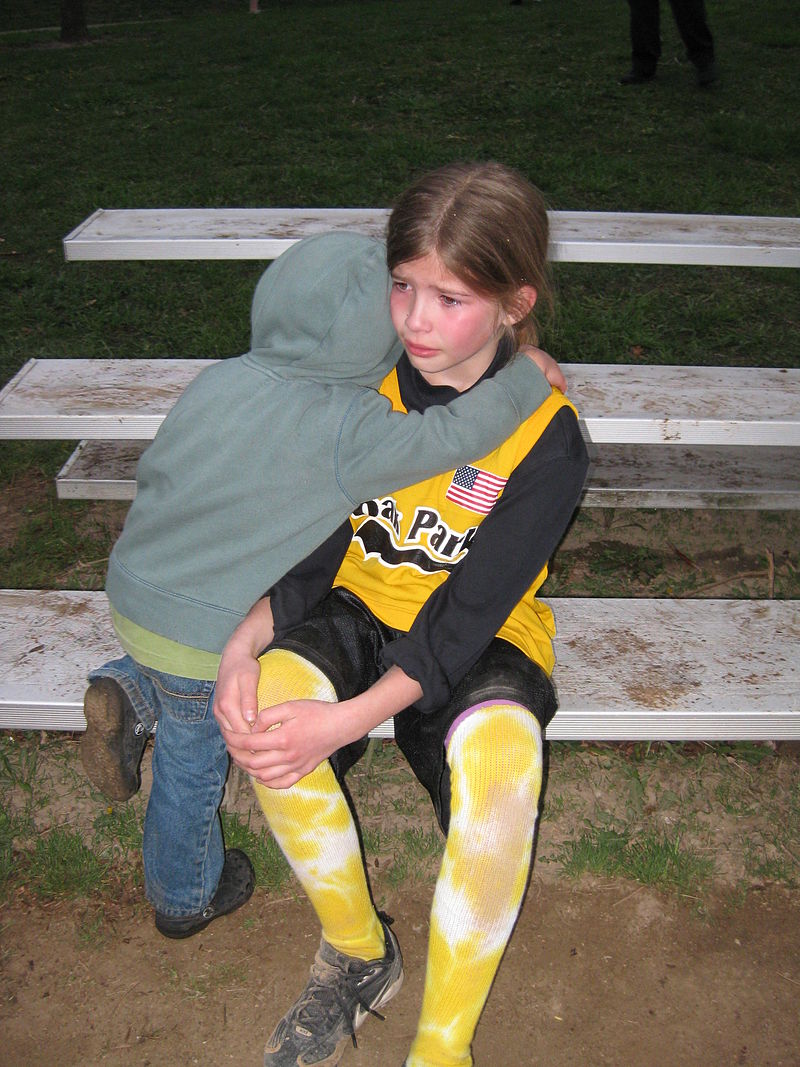 https://en.wikipedia.org/wiki/Empathy what a great photo.

In empathy we feel what we believe are the emotions of another, which makes it both affective and cognitive by most psychologists. In this sense, arousal and empathy promote prosocial behavior as we accommodate each other to feel similar emotions. For social beings, negotiating interpersonal decisions is as important to survival as being able to navigate the physical landscape. Emotions motivate individual behavior that aids in solving communal challenges as well as guiding group decisions about social exchange. Additionally, recent research has shown individuals who report regular experiences of gratitude engage more frequently in prosocial behaviors. Positive emotions like empathy or gratitude are linked to a more positive continual state and these people are far more likely to help others than those not experiencing a positive emotional state.

In the box, the adults construct what they hope will be a lifelike world for the kids who grow up there. Kids there learn empathy for the virtual people whose emotions they share, even though they do not share the physical sensations. A young child who has never been stung by a bee can comfort and shed tears for a playmate who does get stung by a bee. She recognizes the emotions as like her own. Likewise your girl recognizes the emotions of the virtual people as like her own and feels empathy with them.

This is such a cool scifi premise. Your protagonist will be surprised by the physical sensations she has barely experienced but we run into surprises like that our whole lives. The cool thing will be her empathy, which is unchanged over the transition from virtual to real. Earlier in the story you have shown her to have that ability. Then she uses it with herself - her own bodily self of blood and bone which seems like a stranger, but which has characteristics familiar to her from her life before, and with which she can empathize.

Not the answer you're looking for? Browse other questions tagged humans psychology children or ask your own question.