Imagine life evolving on a planet. First creatures crawl out of the ocean and start colonizing the land. Then one of the species gets into such conditions where it needs to specialize in two different tasks simultaneously and that specialization cannot be covered with sexual dimorphism alone.

In other situations this species would've become a "jack of two trades", find a symbiote or just go extinct, but a lucky mutation happens and this species gains an additional dimorphism capability based on a different pair of chromosomes. So now in addition to XX/XY variety they have, say, AA/AB variety while remaining a single species.

Problem solved. AA-type evolves into one task, AB-type evolves into another and the diverse, yet single, species gains an advantage over their rivals. So in a few million years all tetrapods on the planet have this non-sexual dimorphism feature.

So the questions are:

The side-blotched lizard (Uta stansburiana) more or less does what you want, apart from the restricted pairings in your point 2. Wikipedia summary of the lizards

It is called a rock-paper-scissors strategy.

Meanwhile the females also come in yellow and orange throated, with physiological/ecological differences:

EDIT: Oooh, just thought of a way to have your mating restrictions - make them marsupials (like kangaroos or seahorses). Both sexes of your creatures have pouches and can nourish the young in them, but AA have small pouches and AB have big pouches. You start the baby (or clutch of eggs) off in the small pouched parent and transfer them to the big-pouched parent later.

One could make a case that many tetrapods have exactly the dimorphic feature you describe. The morphs are juveniles and adults. 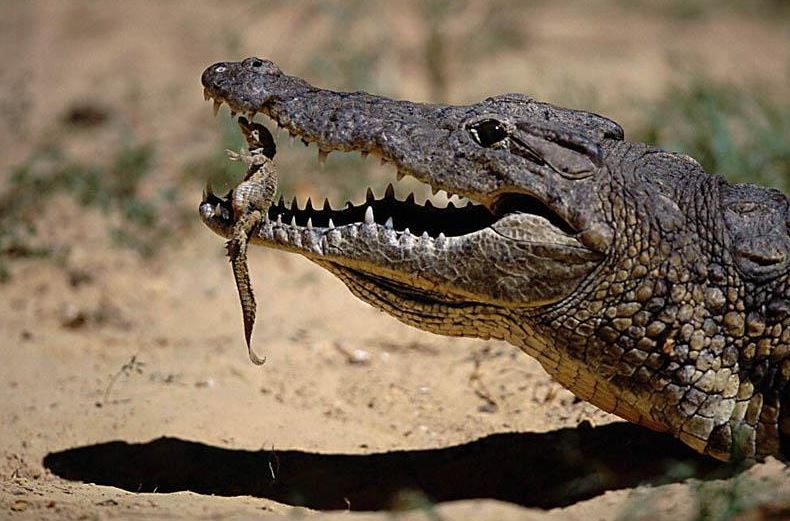 It is so familiar to us that we forget it is not necessarily so. But other animals have young born as essentially miniature adults: worms, echinoderms, mollusks.

A juvenile crocodile does not compete with adults for resources. The adults would not bother with the bugs and worms that nourish the juveniles. There are examples from the insect world too: I once raised a praying mantis that lived on fruit flies as a juvenile and ignored them completely as an adult, preferring crickets.

The primrose is an example of non-sexual dimorphism (called heterostyly in this specific case): Both morphs have both male and female organs, but they differ in the positioning of the organs: One morph has a long stylus and low lying stamina, the other morph has a short stylus and high stamina. This guarantees cross-polination.

several species have three forms with two different male forms, one built around combat and large with other built around sneaking and is small. This is sometimes referred to as trimorphism. Often in these cases the individuals carry all the relevant genes for both forms and conditions in development or childhood trigger one or the other suite of genes.

Then you have caste system in insects which can have several forms performing specific roles.

Multiple morphologies in biology is not that uncommon, Galapagos finch beaks are good example, it is just that if they are not attached to sex somehow they tend to form distinct species over time.

I am not a geneticist, but let's take a crack at it.

This kind of non-sexual dimorphism is roughly (very roughly) akin to blood types. Ignoring for the sake of my argument the universal donor type (O-) and the universal recipient type (AB-), you can't transfuse different blood types without, well, basically killing the recipient.

Therefore, let's use the idea of blood types to forward the idea you're presenting. Let's suggest that your world has only two blood types, and that for successful reproduction it is required that both blood types be present. To avoid confusion, let's call them K+ and K-. Therefore, reproduction requires

No other combination of people will conceive children. This basically addresses your second bullet point.

Let's assume your planet has a bacteria or parasite that can only be rendered inert by the presence of both blood types.

(Remember, I'm not a geneticist, or affiliated with the medical world in any plausible way, so someone practiced in the medical arts might find this reasoning flawed.)

Let's run with a bacteria that is capable of feeding off of either blood type. However, once it starts feeding on one, it changes such that that one type makes it intolerant of the second blood type. This would protect the embryo until a viable immuno system develops that can naturally handle the bacteria (which is why no one is affected by the pestiferous bacteria after birth).

The bacteria survives because there are plenty of male.K-/female.K- and male.K+/female.K+ couplings to allow for its survival. The couplings may result in an infertile embryo, but an embryo is created nonetheless, one that the bacteria can feed on.

I can't address bullet point #3 because I have nowhere near enough insight into physiology and evolutionary genetics to even think about what you might be missing.

Not the answer you're looking for? Browse other questions tagged science-based evolution xenobiology .