I am familiar with the inverse-square law and how detrimental it will be to the power of radio signals as they advance outwards in space. Assume we have two (or why not more?) interstellar colonies, relatively nearby one another—eg. Sol and Proxima—in desperate need to transmit millions of terabytes (petabytes? exabytes? potentially a lot more) of information reliably, per second.
What kind of energy output would we be looking at? My initial solution was to create some mythical device that could alter the wavelength or frequency of the starlight at the sender star system just enough so that the receiver star system could pick it up. However, this seems like an immense build even for our advanced culture, and I'm not sold that it would work at all.
My second solution was to build many, many, many lasers which would transmit said information. I don't know much about the range of lasers, and I'm fairly certain that even though the photons are ~parallel, they are subject to the inverse-square law, and thus degrade over distance.

In essence, What method(s) should an advanced, interstellar culture employ to exchange millions of terabytes per second with a neighboring star system, and what would the energy bill look like?

Edit: I am looking for EM-based methods, ones that would not require relays (which themselves could require maintenance or repairs). I am also looking for a most scientific answer. One that conforms to our current understanding of science. Small latencies are not an issue, given that the information will be traveling several light-years, however, as I've said, I'd like for the method to be primarily EM-based.

There are two ways to approach this:

The size and power of the laser or microwave beam allows it to overcome some of the blockages and "noise" it would encounter in interstellar space, while the massive focusing lens provides the means to fine tune the beam onto a cooperative receiver. 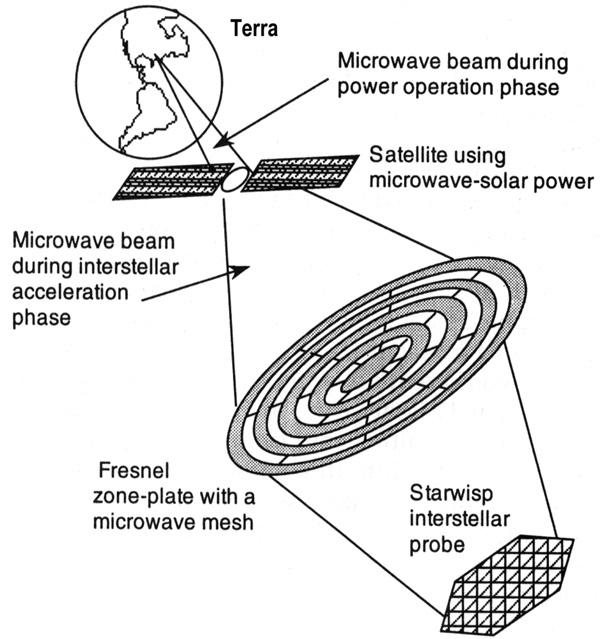 Starwisp. Replace the spacecraft with a receiving antenna at the destination for interstellar communications

According to the CEO, uploading an exabyte of data would take 26 years using a 10 Gbps link. But that same amount of data could be moved in just six months using the throughput of 10 Snowmobile deliveries.

Extrapolate this to a pod full of 22nd century data storage units and you have the idea.

You could use sub-atomic particles or maybe neutrinos and tachyons as alternatives to light. There are a couple of studies that's how they travel at the speed of light and you may want to check if this is a bit more reliable or easier to implement than beaming light from one system to another.

Or if you want to really bend it out of current scientific abilities, you can have tiny space/time wormholes that are stable enough for your data packets to go through from one solar system to another. That would be fast.

60
How far away would an alien civilization need to be for us to not notice them?
14
Information Exchange In Space
7
End-user experience and prominent use cases of robust interplanetary internet

5
Protocol between an information sharing black and white hole pair
3
What is the best way to classify Intelligence in a world full of various Intellects?
6
Accuracy of information in a neo-digital, augmented human age
4
Break-even distance for sending data at c versus sending an FTL hard drive?
4
Interstellar construction between star systems
19
Communicating the idea of danger to an unknown alien civilization
4
Is it feasible to use light as a transmission vehicle?
11
A plausible explanation for the "ansible?" - FTL communications
3
How to write martial/magic arts manuals so they can be deciphered and practised in a distant future?
19
They made first contact and sent us engine plans, but how can we possibly build it?