Plausible reason for women not to be allowed outside settlements?

So, the nuclear apocalypse happens, 90% of humanity dies off, and most survivors live in small subsistence farming communities. The technology stagnates around the mid 1680-ish. Most communities only rarely see caravans and traders come through, as settlements are often few and far between.

In the settlement my character grew up in, men often went on caravans to other neighboring towns to trade goods with each other. But, there is a rule in the community that says women aren’t allowed to go more than a half mile away from the settlement. My question is, since I couldn’t think of one, what would be a plausible reason for them not to allow it?

The most important role in this society trying to rebound from near annihilation is simply to keep the species going. In other words, the ability to bear children, to care for and provide milk to them, to nurture them, and ultimately to sustain the population. This ability is sacred. Anything which jeopardizes that essential contribution to the clan should be avoided.

It is biological fact that females are the only ones who have these all these abilities, and although males play a role at the beginning, it is possible to do without the male after that step.

Outside the settlement are bandits, natural hazards, predatory animals, and so on. If these risks must be dealt with for trade and other business, let the men dirty themselves with such things. The losses of a few men from time to time are a cause for sorrow, but the collective can rebound. However, the women must be protected.

EDIT (to incorporate some good thoughts in comments). This does not necessarily imply this culture is sexist against women. In fact, it could easily have been the women who devised this system, i.e. "We're too important and vital here, you buffoons go trade with the village over the vale, while we look after the babies." Or if you don't want sexism either way, replace "you buffoons" with "you worthy stalwart protectors" or similar.

Further, as other answers mention, exactly this attitude did exist in certain Real World(TM) societies, and still permeates our stereotypes and prejudices to this day.

Bride raiding. Primitive humans stealing women from each other is pretty well established. They make valuable slaves as prostitutes, and can be used for breeding stock. The fastest way to stagnate an enemy group's growth is to steal all of its women. Women's rights and the idea that they are not property and can decide whose camp they would prefer is largely enabled by modern technology and culture. That's all going to go away as soon as society has degraded to the point where food water shelter and security are now the primary daily concerns. Essentially, they are property again and it's a lot easier to control/protect/profit from them if they stay put and do as they are told. It's not very nice, but it's pretty much what the wimmin folk have had to put up with just about everywhere for pretty much most of human history.

Some materials will stay hot for hundreds to thousands of years. It may be possible for cleaners to identify and haul away all radioactive debris near the settlement, but you can't control the amount of hazardous material in the wilderness. In regard to radiation, women have a 20% lower exposure limit for a 3% higher cancer risk. Women also require only 400 rem across 2 or 3 exposures to suffer permanent sterility. In this respect, men may be more disposable. Or, men already sterilized by radiation may be most disposable.

Particularly, metals can become contaminated by radioactive materials, so following a nuclear apocalypse - especially one that has killed so many - there may be value in keeping women away from the outsiders and anything they have touched until it can be properly examined.

In fact, you don't need a plausible reason for that. There are and were societies where similar rules were always in force (although they are more difficult to implement in a rural farming environment, because the labour of women is needed on the fields).

However, you should think hard about the consequences of such a rule: How are marriages arranged? Is the society matri-local and matri-linear, i.e., the women stay on their property and inherit it, while the men have to change places when marrying?

Moral customs: women who wander away from a settlement are only prostitutes and shed a dark light on their family honor.

As such it's a male's duty to protect the family honor by preventing the women of his family from moving far from the settlement unless there is a marriage agreement.

By the way, this is not far from what was womens' reality in mid 1800, so I really don't get how you

I couldn’t think of one 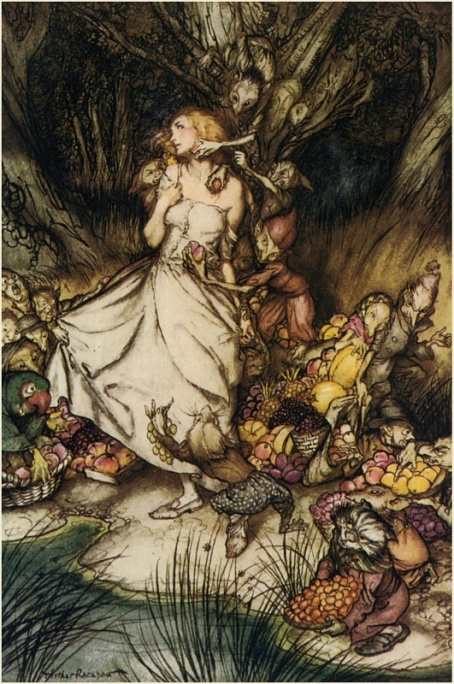 Up the airy mountain,

Down the rushy glen,

For fear of little men;

When she came down again

Her friends were all gone.

They took her lightly back,

Between the night and morrow,

They thought that she was fast asleep,

But she was dead with sorrow.

They have kept her ever since

Deep within the lake,

On a bed of fig-leaves,

Watching till she wake.

The prior answers are super sensible and realistic. Women are life and have always been taken as prizes by communities of humans who want slaves and brides. To this day, as has been pointed out.

But if you want something more surreal and supernatural - there are other entities which might want the women. They do not want them to work, or for their meat, or for their babies. They want something else. Their motivations are not clear and maybe not knowable. Why do they want little Bridgit? Why did they let her come back, only to retrieve her before the next morning? Why do they watch her on her leaf-bed in the lake?

Fairies are the Other. Maybe that can give your story some weird energy.

men often went on caravans to other neighboring towns to trade goods with each other. But, there is a rule in the community that says women aren’t allowed to go more than a half mile away from the settlement. My question is, since I couldn’t think of one, what would be a plausible reason for them not to allow it?

The Torah has different rules for virgins being raped inside and outside of the town gates. When raped inside, they are stoned because it is assumed that they could have shouted loud enough to prevent the rape. When raped outside, the rapist has to marry them and is not allowed to divorce them.

Seriously. "Town gates" can correspond more or less to your half-mile radius and we are talking about the laws of a tribal society. Basically it is considered detrimental to value preservation of females if they venture too far outside. Assume they get raped and they may be off regular sex for months before you are certain she has not gotten pregnant in a time frame where you'd want to stone the potential bastard child (in which case you lose almost a year as well as the additional food she consumes during pregnancy).

This is just slightly more misogynistic than the laws in the Scriptures which are definitely post Stone Age. Remember: if your property might have tried preserving herself by screaming outside of hearing range, she may be allowed to survive and marry. Probably not exactly the man she dreamt of (excepting nightmares), but women can't be choosers.

A specific example of such a case has been observed in the Canopo peoples of the Dougon taiga in Northern Gachaza. A mutated species of parasitic insect called the flockfly aggressively attacks the mammary glands of larger mammals.

For some reason this fly is particularly attracted by the odor of secretions from Montgomery's glands in human women.

Flockfly infestation is relatively rare, but when it happens it is devastating to livestock, not only due to the damage to milk production but also due to secondary infections.

The infestation is difficult to eradicate once it has taken root in a herd, so to reduce the chances of flies being brought in from outside, women of childbearing age and older are prohibited from traveling outside their own communities except in direst circumstances.

Flockflies are generally only attracted to women who are pregnant or lactating, but the taboo on women traveling as a result of this phenomenon has become generalized to all women.

8
How plausible would it be for a Reptilian race to have settlements in cold regions without hibernation?
4
What is needed for people not to carry swords?
3
What are some occupations that would exist in a small settlement in a post-apocalyptic world where going outside would not be a requirement?
15
Is it plausible for a certain area of a continent to be/remain/become uninhabited for a long period of time?
2
A reason for an isolated community to need mainstream society
1
What's a possible justification for Giants not taking over the world?
8
Is it plausible for a tribe to have a standing army?