Would religion still have a play role in society after the apocalypse?

So, the classic nuclear apocalypse happens, 90% of the human race is gone, and the cities of the world have been totally destroyed. Life was PERMANENTLY changed for the survivors. People were reduced to becoming substinence Farmers at best, Hunter Gatherers at worst. Towns are the only safe place to live, because the vast wildernesses are inhabited by viscous wild animals and Highwayman, who will often EAT any poor saps they find, and women found wandering around will often be kidnaped and enslaved. The story I’m writing takes place in North America, mostly in the Southwestern, Southeastern, and Northeastern regions of the United States, 20 generations after the apocalypse happened. So, my question is, would religion still play a major role in society, or would it just be forgotten by the survivors?

People were reduced to becoming substinence Farmers at best, Hunter Gatherers at worst.

Looking at "primitive" societies, they all have very deep and elaborate religions. Religion is generally a way to explain "why" things happen, and for farmers, hunter gatherers and people without the scientific method of discovery (or a social and educational foundation to apply the scientific method), figuring out "why" things happen and understanding ways to control it is very important indeed.

Obviously each religion is going to be different, starting from different foundations (people who live in the Steppes or Prairies will have a very different conception of the world than people who live in forested terrain or on the sea coasts). So the gods and spirits they create to explain the world around them will emphases the local environment. The PIE people (Proto Indo European) are reconstructed to have lived on the Steppes, with one clue being their chief deity "Dyeus Ph2ter" translating as "Sky Father". On the open Steppe, under a clear, bright sky for generations, the idea of an all seeing deity in the sky would seem fairly obvious.

Other PIE gods were invoked to explain the creation of the world, storms and so on. 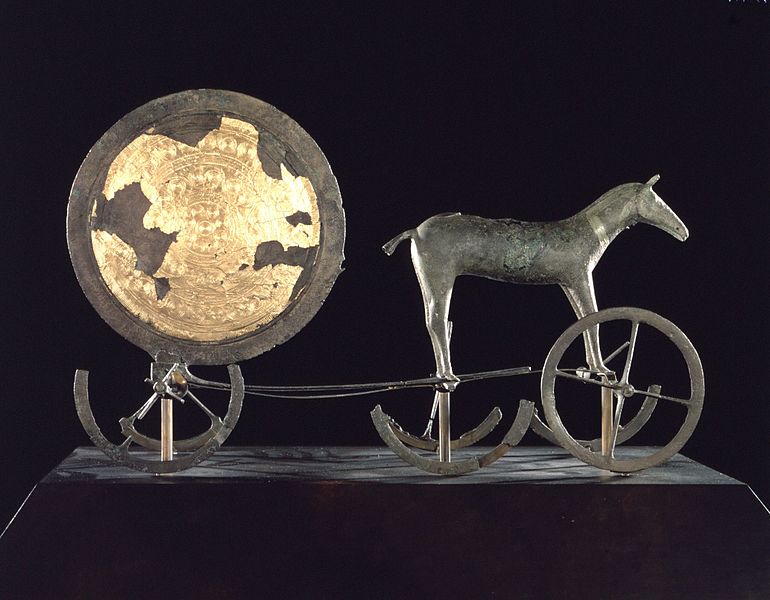 One thing which will happen over a prolonged period of time (20 generations) is that peoples will move due to trade, naturally occurring climate changes, disasters or wars. This means people will come into contact with other religious traditions, and many gods will eventually become incorporated into other pantheons, especially if their "stories" are compelling enough to fill voids in the local religions. The ancient Greek pantheon shows evidence of that, we have Helios and Apollo identified as "Sun Gods" depending on the myths you read. Aphrodite had multiple origin myths, suggesting she is a "composite" figure blended from many "love goddess" stories:

As with many ancient Greek deities, there is more than one story about her origins. According to Hesiod's Theogony, she was born when Cronus cut off Uranus's genitals and threw them into the sea, and she arose from the sea foam (aphros). According to Homer's Iliad, she is the daughter of Zeus and Dione. According to Plato (Symposium, 180e), these two origins were of entirely separate entities: Aphrodite Ourania and Aphrodite Pandemos.

So in order to develop relatively consistent mythologies and religions for your story setting, understand what the local environments would look like, imagine how people would try to explain these environments and then build a pantheon around this. You will likely have several "core" religions based on the local ecosystems and environments, and probably some "mixing" around the edges. If your backstory has conquest, then the religion of the winners was probably imposed on the conquered peoples, but pockets of the old religion amy remain in backwaters, and the conquerors may have incorporated some of the old religions into their "official" religion (much like the Romans did) in order to foster peace and order.

Yes, two of the functions are to provide a framework with which to process things beyond your control and to provide a sense of stability, belonging and continuity.

After anything that can be called apocalypse both of those would be highly valuable for the people. They would reasonably be more committed to religion than before after all the people who break mentally and lose faith die off.

That said the form of religion might change quite a lot.

The starting point would be the previous religions of the community with the comforting and continuity providing parts of it turned to the max. What those are varies with the people but generally we are talking about simple black and white things that are easy to understand and easy to visibly commit to. We are talking about rituals, strict moral codes, prejudices, and unquestioning dogmatism. Not anything that is abstract or requires mental exertion. People have more pressing concerns to think about.

The second factor would be the apocalypse itself and how the community processes and explains it emotionally. It would probably be seen as wrath of god or a war in heavens between light and darkness with human sin making us vulnerable to infernal powers. Either way the image of god and divine would become wrathful, warlike, or both.

And it would be blamed on people who with their sin provoke divine wrath or made people fall to infernal powers. A scapegoat, persons and actions responsible for what happened must be found and removed for people to feel safe that it will not happen again.

The scapegoat may be accurate or amusingly off target. It makes no real difference unless the apocalypse really was caused by divine wrath. Usually people just blame whatever they as a group hate and distrust even when they know better.

The point being that the lesson people draw from the apocalypse tells lot about the people, very little about the actual event. Which is actually as it should be, religions exist for the needs of the people practising them, not for some abstractions.

So just pick something related to the event that people can hate, condemn, and remove from their community. Bonus points if it requires active suppression and prejudice. Meaningless rituals, such as flag or idol burnings, will suffice as long as people can participate in them and feel they are acting to reject evil. I think burning US flags to deal with issues people have no real way of influencing is a fairly common example of this.

Generally the concrete forms will be retained or adapted, abstractions forgotten or replaced. For example Christian ethics will probably be replaced with something much more simple and primal but the new ethics may use they old words reinterpreted to the new values.

tl;dr - It might be very different from our religions, but yes.

Lets first look at what happened in real life history:

Tens of thousands of years ago religions started developing. Back then society was based mostly on hunters-gatherers. Later in history the first farmers came to be, and while the types of gods and ceremonies changed, the basic ideas of a religion remained quite stable for a very long time.
Now if we look at the last century, we will find nowhere near the amount of new religions being formed, and of those that were, they hardly had the impact of new religions in societies similar to what you describe.
We see then, that religion is very much prevalent among primitive societies.

But Why would religions have specifically in society as well:

There are some things that always characterizes religions, let's look at them and see how they fit in your story. Remember, not every criteria has to be met; Your people know the concept of religion therefor the odds are not equal.

We can see that in real life, the type of society was a flourishing ground for religions. We also see that many reasons for that would very much apply in your story. That's why I would say - Religion will definitely have a place in your society.

P.S. A touch on believeability: Your readers are well aware of religions, and only know a world that houses many of them. They also all know religions ain't a new concept. That makes it likely your audience won't ever come to question the existence of religion in your story.

Of course religion will play a role in society after any great disaster. So long as there are any human beings left after the apocalypse in your setting, there will be some kind of understanding that there Someone, some fundamental Power, beyond what can be sensed with mundane senses and understood with limited thought. It's human nature to seek beyond the horizon, whether that's expressed via scientific enquiry or spiritual journey. Or both together.

You might as well ask Would breathing still play a role in society after the apocalypse?

Not the answer you're looking for? Browse other questions tagged society post-apocalypse religion .

50
What do you do with all the bodies?

28
How would societies be if created and populated only by young people?
25
Religion After the Discovery of a Multiverse
6
How would a post-religion society be in a still religious world?
4
What role does the Merchant caste play in society?
4
What role should eunuchs play in a matriarchial-led magical-religion?
5
How to start a second industrial revolution?
2
Which common military equipment could last 500+ years after an apocalypse?
4
What role can lineage play when males have no legitimate heirs?
2
What Role Would Monks Have In a Fantasy Society?