How could an organism (anywhere from animal to monster to humanoid) induce and control lifelike hallucinations simulating reality in (possibly unwilling) humans?

The aesthetic thought was of a monster (or whatever) surrounded by humans who are experiencing some form of simulated reality while laying in a puddle of chemicals around the monster.

Preferably the humans would be relatively unharmed once the creature released them from their experience.

Specifically, I'm interested in how and in what detail could the perceived realities of the dreamers be controlled? 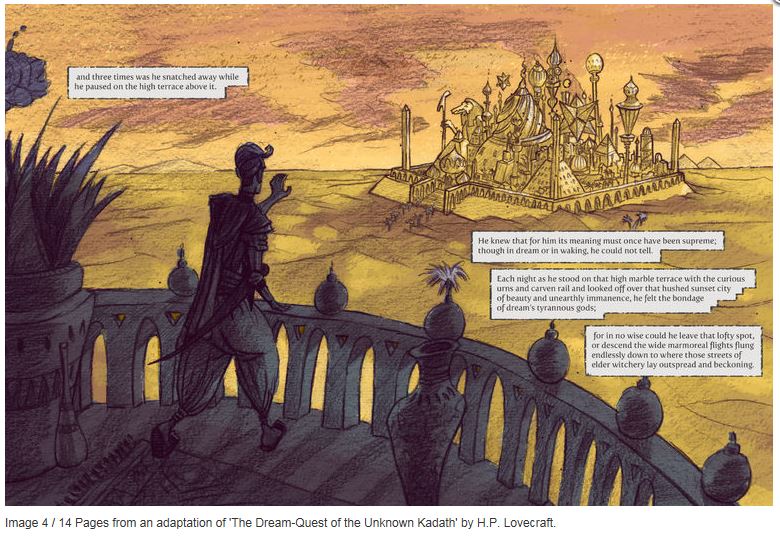 Dreams are hallucinations of simulated reality. In lucid dreams the dreamer has a modicum of control. Lucid dreams can sometimes incorporate stimuli from the outside world as described in the Wikipedia article. The picture is of a scene from the DreamQuest of Unknown Kadath, all action of which takes place in the realms of dream.

Your pools of chemical change the nature of the dreams the dreamer has. The alien is good at offering stimuli that lead to the perceptions in the dream. A lucid dreamer might be able to also change the reality they perceive.

Microrganism controlled stimuli So basically what happens us this, your creature sweats out a bunch of microrganisms(the puddle) along with a quickly evaporating substance, then as a human lays in the puddle the microrganisms get absorbed by the lungs and work their way to the brain where they stimulate the mind through various enzymes, hormones and electrical impulses as the other creature directs them through sound waves to high for a human to hear.

Not the answer you're looking for? Browse other questions tagged science-based reality-check creature-design or ask your own question.

5
How would a chemically powered gun work?
3
How could an organism chemically need sex?
0
Is there a simulation-within-simulation bedrock?
17
Could deliberately induced Kessler Syndrome stop ICBMs?
3
Laser Induced Plasma Channel Inspired Gun
2
How can I design a magically-induced coma?
7
Scientific Explanation for Basilisk-Induced Death
0
Obliquity-Induced Hadley Cell Reversal