Does anybody have any ideas? The two men in question are manning the submarine and need to get inside the rocket.

Now is there any way under the sun that such a situation would be possible?

I am a former submariner from the U.S Navy. I'm certainly not going to say this cannot be done, but I am going to give you a list of problems.

First, let's clear up a common misconception - differential pressure crushes hulls, NOT absolute pressure. The effects of absolute pressure on substances is important in terms of determining things like whether or not your atmosphere is currently in liquid form, but that shouldn't be a concern here either. If you can pressurize the interior of your hull to about 1320 psi absolute, the differential pressure on the cabin will be about zero. That means no crushing.

"Why aren't all submarines pressurized like this?", you are probably asking. The answer is that this would be very difficult to do without killing all the sailors. High partial pressures of oxygen are toxic to the human body. Getting the mixture exactly right is hard enough during saturation dives. At 1320 psi, the amount of oxygen has to be less than 1% by volume, and the rest of the atmosphere has to be hydrogen, helium or neon. At these ratios the hydrogen won't even be flammable. Any more oxygen and people will definitely start having seizures, and even this is probably too much for 20 years.

Another brief anecdote about pressure - an instantaneous change in pressure of 55 pounds or more should, theoretically, kill basically everyone, and that's just less than 5 percent of the pressure the cabin will have to be raised just to keep from being crushed. The pressurization will either have to be done automatically, or manually through some very carefully designed valves that were basically designed for this exact purpose. A mistake can kill everybody on board, and that's not even accounting for the fact that it could pop the cabin outright.

Now let's assume you have the facilities necessary to feed these people for the requisite amount of time. Fine. The moon has essentially no atmosphere, and it is exposed to sunlight periodically. Vacuum is a terrific insulator. The sea floor is COLD, and hasn't seen sunlight since some monstrous astronomical event deposited water on this planet. Water loves to suck heat out of things. I'm not saying no - I'm saying on top of having highly specialized pressurizing and mixing equipment to prevent being crushed, you also need a seriously robust energy source to prevent your people from succumbing to exposure. People are known to wear jackets in the enginerooms of nuclear submarines when they're deep, because the seawater piping cooling everything works really well.

Now I have great news. Once you have these problems solved, the rest is actually pretty easy in comparison. Your scenario makes it pretty clear that rescuers have time on their side - there is not an immediate need to rush into things. This gives them the opportunity to do everything they would have to do - like building a deep dive vessel capable of interfacing with another pressurized vessel. DSRVs don't have a way to raise their internal pressure to 1320 psi, and it is highly unlikely that the airlock will conform to the aspect of a standard submarine escape trunk. These obstacles can be overcome - it will take a budget, and it will set records, but it's significantly more possible than the set up on the rocket itself.

As long as the DSRV takes precautions to prevent incompatibilities with the atmosphere on the rocket, can depressurize at controlled intervals, maintain partial pressure of oxygen on the way up, and stay deployed long enough to get the divers into a proper diver's bell or hyperbaric chamber to finish depressurizing, you should be all set.

In the movie, "The Hunt for Red October" men were moved between two submarines using a DSRV, or "Deep Sea Rescue Vehicle." You're going to use something similar.

But, your biggest problem is that the rocket won't have an underwater airlock that a DSRV would expect to find. This would require outfitting the DSRV (as they had to do in the movie, oddly enough), to permit access.

Note that from the standpoint of believability, rockets are designed to hold pressure in, not keep it out. At 3,000ft it would likely crush like a beer can. I'm going to assume you addressed this issue in your story.

You need an airlock. Simply have one on the sub with some sort of watertight gasket around it, then have a matching hatch airlock assembly thing on the rocket. Once the seal with the rocket's hatch is made, lock onto it somehow, then pump the water out of the airlock area. 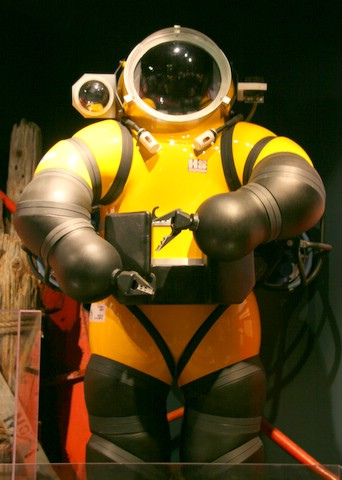 (A moon pool) is an opening in the floor or base of the hull, platform, or chamber giving access to the water below, allowing technicians or researchers to lower tools and instruments into the sea... A moon pool also allows divers or small submersible craft to enter or leave the water easily and in a more protected environment.

"It would be Chuck Norris manly if our voices weren't so squeaky".

The space vessel doesn't stand a chance of preserving normal atmospheric pressure inside its fragile hull. The only way this works is if they slowly pressurized the spaceship to equal the water pressure (30 feet ~= 1 atmosphere of pressure, so 100 atmospheres of pressure) -- in a way that didn't harm the crew. It helps to be breathing pure oxygen and not nitrogen (of course, oxygen at 100 atmospheres pressure is a real fire hazard!)

The humans don't need to stay at 1 atmosphere of pressure. Sudden transitions are bad, but humans can adapt to changing pressures. That is how diving works. The trick is managing the transition between 1 atmosphere and much higher pressures.

If they are equipped for space EVA, they possess SCBA equipment, and it may be possible to adapt it for 100 atmospheres. If that's the case, they can take their sweet time getting to the sub!

Regardless, if the spaceship is pressure-equalized with the ocean, it may be as simple as opening a door (preferably on the bottom) and swim to the sub. Do this when the sub is right alongside, obviously.

It's not a problem getting people in and out of the sub at depth, they all have airlocks, not least for Kursk style evacuation.

The hard part is coming back to 1 atmosphere of pressure, as we presume will be inside the submarine (which is built for the external pressure). Doing this is well-understood, but can be a very long, slow recuperation that must be done inside a controlled-pressure vessel. Which a submarine airlock is. Again it helps to have been breathing pure oxygen for awhile.

If the sub has enough notice, they can send out divers to aid in the evac. Some submarines are especially equipped to move large numbers of divers in and out, so if there's time to dispatch the right sub, this can go easier still.

Not the answer you're looking for? Browse other questions tagged ocean .

4
Genetically altering soldiers to be capable of doing missions in an aquatic environment?
10
Do moons determine the speeds at which tides move? Is there a limit to this speed?
1
How would a colossal explosion affect an ocean-based planet?