Ahh insects, such fascinating creatures with fascinating traits, but sadly as I have found out most are only available to them and not us thanks to the square cubed law.

Maybe the following traits, with the combination of optics and biology can be possible. So my idea is:

So my question is can the eye and mind be enhanced like this without hurting the human? While at the same time using special goggles made to mimic 360 vision and maybe even on some level, compound eyes?

The human eye can see in UV—if the lens is removed:

You may have heard that digital cameras can be made sensitive to infrared light by removing the IR filter found inside, but did you now that something similar can be done with the human eye? People who have aphakia, or the absence of the lens on the eye, have reported the ability to see ultraviolet wavelengths. Claude Monet was one such person.
The Human Eye Can See in Ultraviolet When the Lens is Removed

However, without the lens, the eyes are more vulnerable to UV damage.

I see no reason why eye size can't be increased to three times the current size, although you'll need to also modify the skull so that it all fits. (Obviously this is not a change you can make to living humans.)

Some primates have very large eyes compared to the size of their body. It's actually a little unsettling: 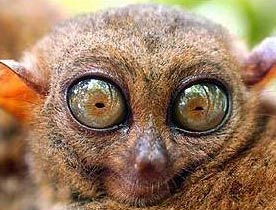 There's a big difference between dragonflies and humans here due to the placement of the eyes:

Animals with eyes that are located on the side of its head would suggest a prey animal. Side eye placement allows for greater peripheral or side vision. This enables the animal to see predators approaching from the side as well as from behind. This vision is very important for protecting an animal when it is grazing or feeding.
How to "Read" a Skull: Eye Placement and Size

Even with larger eyes, vision will not be 360 degrees. The skull would need to be significantly redesigned so that the eyes are on the sides of the head, not the front, but even this will probably have blind spots in front of and behind the head.

You don't actually need to make any modifications to the eye to get the effects you want. The solution is quite mundane actually: all you need is VR goggles and a camera that sees in 360 video and UV. Each eye gets a fisheye image that shows UV light. Of course, training will be needed so this isn't super nauseating and confusing, but I think it's possible for the human brain to adapt (since our brains are very adaptable).

Not the answer you're looking for? Browse other questions tagged science-based biology vision or ask your own question.

12
What would be different if a person has broader visual spectrum than normal
0
The dragonfly diet
3
How do I explain the compound eyes of my creatures?
15
See more colors?
10
Would a sapient being sensitive to polarized light be able to see the angle of polarization in a photograph?
11
A human civilization genetically altered themselves to specialize in certain roles, why would it be naturaly undone after said civilization vanishes?
5
How much can I expand human color perception by adding new photoreceptors?
8
How could be a relatively "universal" eye?