What kind of technology would be required for a space travelling civilization to have an effective communication system or network that is similar in speed to the telegram? How would it work? This is a world in which FTL is not possible and colonized planets are within the same solar system. Thank you in advance.

It's a real project by JPL and Vint Cerf to solve just these problems being encountered by our missions to Mars. It involves designing a new set of protocols to account for the special problems of an interplanetary internet from the distances involved and the fact that the planets are in motion relative to each other. Primarily...

We have a limited number of antennas and transmitters with the power to transmit and receive to/from other planets. They have limited bandwidth. As the Earth rotates other planets, such as Mars, will only be in the sky for an antenna for a certain period each day. The speed of light means you will always have latency measured in minutes or hours.

As planets rotate around the Sun their positions relative to each other change. If the Sun gets in the way, interference from the Sun might degrade or completely block communications. As the distances change, latency will also change. For example, Mars can be anywhere from 3 to 20 light-minutes away from the Earth.

Given these issues, the usual TCP/IP practice where each connection is negotiated, and each packet of data is sent, received, and acknowledged wasn't going to work.

Here on Earth, the IP (Internet Protocol) and automatic routing means we don't have to care about the details of the network. We just give an IP address. How it gets there, the routing, is taken care of for us. If part of a route is knocked out, the network will automatically reconfigure to send via some other route.

Current spacecraft typically don't have this. They need to manually manage all the details of the route. And if a route is unavailable there's often no alternative, for example between Earth and Mars, they have to store-and-forward when it is available. To solve this the Interplanetary Internet developed BP (Bundle Protocol). Like the IP protocol, it handles the details of sending an interplanetary message, including storing-and-forwarding as necessary.

This also allows multiple space missions and agencies to more easily share their interplanetary network resources. Here on Earth the Internet is a conglomeration of networks run by various businesses, countries, and countries. They make deals with each other at a high level so the result is communication flows freely between these privately owned networks for their users. The Interplanetary Internet would work similarly. Rather than NASA and ESA and JAXA all having to negotiate to use each other's communication resources for every mission, they can all negotiate once to join the Interplanetary Internet and then use its resources.

This also allows resources to be used more efficiently. An antenna which normally talks to Mars could be used to talk to another planet when Mars is below the horizon. Instead of having to be negotiated specially for each antenna, as part of the Interplanetary Internet data would be automatically routed to this idle antenna.

Because of the involvement of Vint Cerf and used concepts from the network-centric Plan 9 Operating System, this lead to the greatest talk marquee in the history of academic talks. 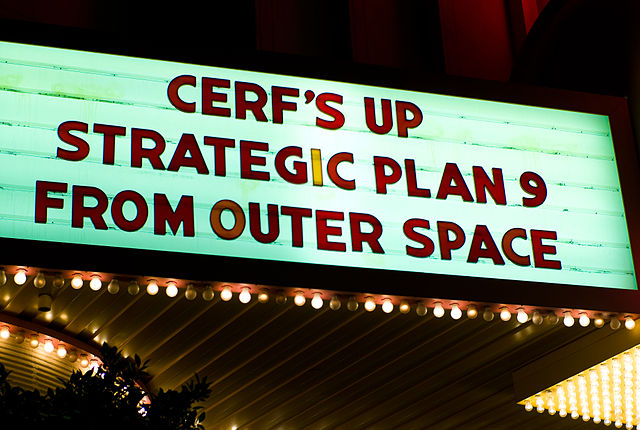 What you want already exists. It is called Deep Space Network:

The NASA Deep Space Network (DSN) is a worldwide network of US spacecraft communication facilities, located in the United States (California), Spain (Madrid), and Australia (Canberra), that supports NASA's interplanetary spacecraft missions. It also performs radio and radar astronomy observations for the exploration of the solar system and the universe, and supports selected Earth-orbiting missions. DSN is part of the NASA Jet Propulsion Laboratory (JPL). Similar networks are run by Europe, Russia, China, India, and Japan.

The DSN supports NASA's contribution to the scientific investigation of the Solar System: It provides a two-way communications link that guides and controls various NASA unmanned interplanetary space probes, and brings back the images and new scientific information these probes collect.

What you need is a similar structure on each major inhabited body, be it a planet or a moon. Probes orbiting the sun may serve as interplanetary relays.

24
How to improve TCP/IP for an interplanetary WAN?

11
What would come first, the colonization of the solar system or interstellar colonization?
7
What's a plausible explanation for a space faring civilization with a "16th century" culture?
62
What realistic way could limit an FTL drive to only travelling between stars?
1
Intergalactic Communication?
4
Could a solar superstorm or distant supernova wipe out all our extraterrestrial technology?
12
Effects of stray bullets in space
48
How can I justify a Type III civilization using planetary jump drives instead of FTL starships for galactic commerce and travel?
1
What resources would space traders trade, assuming a gate network but no other FTL exists?
6
I want my aliens to arrive at the edges of the solar system. They would arrive in a week. What do I need to have?
2
Navigation in space