Let's imagine some very powerful dude with absolutely ridiculous strength/speed/durability. I'm not asking about the credibility of this, let's suppose it's magic. He's got some magical sword as durable as it need to be (probably way more than the hardest thing we can think of today. Here again, let's say it's magic). It would be 115 cm long.

Now the real question : If this guy strikes air with his sword at a very high speed, what would be the effects ? Sounds, shockwaves, light, sparks, fire, plasma ? In which amplitude ?

To clear up the ambiguity left by the "very high speed" expression, please give me your advice about these 3 orders of magnitude :

Let's say it's the instantaneous speed of the tip of the sword. We're on earth, same atmospheric pressure, same gravity, at sea level.

I'm looking for some cool effect without obliterating the entire world, so I'm looking for the best speed for that. I'm hungry for maths too, if possible.

Feel free to give me your advice about how to make things even funnier if possible. Keep in mind that I'm very well conscious of the ridiculousness of the situation.

Perhaps the best way of looking at this is to use the equation for kinetic energy:

Since the mass of the sword is going to be held constant, the part of the equation where we see the change in the energy delivered to the target is the "V^2" part. In other words, the energy increases as the square of the velocity.

So a typical "arming sword" (which I am assuming you are referencing when you say "longsword" weighs 1.1Kg, or 1100g

For context, we will look at the Atomic Rockets "Boom Table"

At 300m/s, you are striking with just under the energy of a 20mm cannon round, or @ 11 grams of TNT. In context, an anti personnel mine might be that powerful, removing limbs fairly easily.

At 3000 m/s, you are delivering just under the energy of a kilogram of TNT. This is like having an anti tank mine or IED explode on your body, expect shredded remains to go flying across the battlefield.

At 150,000,000, m/s, you are delivering a nuclear punch, of @ 3.5Mt of energy. No human or animal target will even remain (the amount of energy is so great even "pink mist" will have been rendered into its constituent atoms in a rapidly expanding ball of plasma). 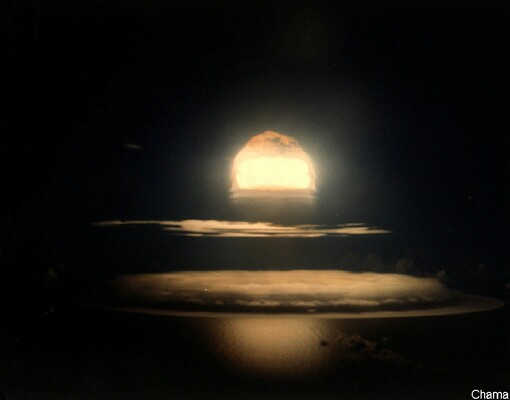 Perhaps a high block won't be so effective in this case

Frankly, I'll just sit back with my sniper buddies and try to engage from @ 3 km away.

Let's try to work this out for the lowest order of magnitude.

So this dude has absolutely great speed/strength, as you mentioned. So let's assume his arm accelerates at 46.2 g of force, which a human could definetly survive. That would take $v_f = v_o + at = 453.07t = 300$ (bad with units, so didn't include, sorry). So it's concievable that it could accelerate in less than one second to the speed of sound. Obviously, the object would produce a sonic boom (an order of magnitude louder of a bullet, I'd guess, so wear earmuffs because 150 decibels is a lot). One side effect would be any drones/air troops fighting him would literally get knocked out of the sky if the sound is at the correct resonance frequency (140 decibels to disable a craft that was up to 130 feet away, so can disable crafts up to 1/4 mile away).

The next question is what they are doing with that momentum $p=mv$ which would probably be several hundred kilogram-meters per second.

A rule of Newtonian physics states that the impulse imparted to an object is equal to the change in momentum for that object, provided no other forces or effects are involved. This requires an impulse in the reverse direction of hundreds of Newton seconds, which would also cause massive deceleration. For the impulse to not have him black out, he would have to use hundreds of Newtons of force.

In the meantime, "light, sparks, fire, plasma" are not likely, because if you see a plane break the speed of sound, they don't go 'lights sparks fire plasma' (unless something is really wrong). So a big soundwave which could cause permanent hearing damage and knock drones out of the sky is it (unless you consider what it is that he/she's hitting). I don't dare forecast for the second/third scenario (my physics skills aren't sturdy enough).

Not the answer you're looking for? Browse other questions tagged physics weapons or ask your own question.

9
Arrows Beyond The Speed Of Sound?
3
Realistic bow weight and penetration for a humanoid of large size and strength
1
Why would be preferable use crossbows than firearms?

28
What would the effect be on Earth if Mars disappeared?
2
The resonating sword of doom
55
How fast would a sword need to be to avoid getting blood on it?
2
What is the most secure way initiate a kinetic strike?
25
Shattering Swords: Yea or Nay?
6
A mass manipulation tech - possible?
8
Could a mass-proportional physical speed limit on projectiles “nerf” guns but not ruin archery?
5
Suit for very fast running