The society in question is feudal in structure. The most advanced widespread technology defining this society is the flintlock muzzle-loading firearm (I'm undecided as to rifled or not, but leaning towards not). Their capabilities do not extend to mass production of these muskets and pistols, with the vast majority being handmade by craftsmen. The difficulty and expense with which they can be produced is roughly equivalent to the production of knightly accoutrements in the High Middle Ages.

The social structure consists of serfs and bondsmen at the base of the hierarchy. Above them are a landowner/warrior class defined by possessing the wealth to purchase and maintain a firearm (analogous to knights). Above them are the lords, with larger landowning privileges and access to greater armouries, and a feudal king above them.

So basically mid-feudal Europe, but with muskets instead of knights.

The lands this society inhabits are largely analogous to the more difficult areas of northern Europe. The landscape is, by and large, difficult to traverse as it is heavily wooded and mountainous in many areas, making the use of heavy cannon difficult. It's bordered by high mountains on one side, sea on another, and steppe on the last (inhabited by steppe-nomads with similar access to firearms).

Most of Finland might not be a bad analogy, or perhaps areas surrounding the Carpathians.

What military structure and army composition might arise in societies in these circumstances?

I've got a rough idea of small feudal levies armed with hand weapons, acting as anchoring blocks for groups of skirmishing nobles. Use of cavalry might be difficult given the terrain.

Would this be realistic, or are there significant differences to this structure that firearms would change?

If this is too broad/opinion-based please let me know and I'll fix it!

I don't think you are going to witness much change, for the Following reasons:

1) Massed fire is one of the best uses for a musket in large scale conflict. You can only shoot the thing so fast and smooth bore guns are less accurate than rifles. Aiming one to hit a target is more of a suggestion than a directive, if you know what I mean. It does have enough power to penetrate armor within about 200 yards, maybe less. Bows and crossbows are effective to an equivalent range.

2) One of the big advantages the Musket gave to armies was that you could issue one to just about any ploughboy, and within a very short period of time, he would be an effective soldier. It took years to train good archers. It took less time than that for crossbows, but crossbows relied on muscle power to draw and load, so only the fairly strong would be used in that role. A chemically powered weapon like a musket, you hand some kid the gear and give a few days of instruction and you have someone who would be good to stand in for massed fire. In your scenario, though, your nobleman is NOT going to hand some ploughboy a very expensive personal weapon.

3) You could have the nobles engage in the sport of sniping if you gave them fine rifles instead of muskets. This could be the preferred method of combat for the truly wealthy. Less wealthy would still be mounted knights in a heavy cavalry. Even though Heavy cavalry is less useful in mountainous terrain, it still has it's place. The higher nobles would go out, find a good spot, and try to take out an opposing general from 300 yards.

4) If you want your warfare to lean toward ranged weapons, things could lean toward crossbows. Remember the goal is massed fire so that infantry is seriously weakened before they can get close enough to poke at your squishy bits. Since the training cycle is reduced, despite losing some because they are just a little too weak. You could get a lot of crossbowmen ready for a battle in a relatively short timeframe. They aren't going to be marksmen, but they can stand shoulder to shoulder and throw lots of sharp wood at the other guys. Of course way back in feudal societies, you may not have given them even crossbows, you might just give them a sharpened stick and tell them you hope they don't die (look out for the burning pi...oh dear).

I see your army going out, your conscript serfs pulling the baggage train and you occasionally giving the strongest a crossbow (no bolts, of course) to train with, learning to load aim and fire. The rest of your peasants would get a sharp stick, crappy jobs and occasionally food. They also get to walk out front to find potholes, man traps, and to draw enemy archers. Your heavy cavalry and archers are arranged beside and behind the column, surrounding your noble and expensively armed general. an experienced hunter might ride ahead to scout some suitable locations for the Lord to hide and take pot shots at the enemy.

The real issue with firearms is they produce a quantum change in warfare. In our history, there was already an "Infantry Revolution" sweeping the battlefields in the late 1300's and through the 1400's, with expensive, exquisitely trained from boyhood fighters like knights and longbowmen being replaced by levees and city men using weapons which were effective against knights, Samurai and so on, combined with tactics that allowed the effective use of these weapons by relatively untrained men.

Crossbows could deliver @ 200J of energy against targets, allowing peasants or city tradespeople to take down armoured knights, and crossbowmen could be protected by formations of pikes which prevented knightly charges and even made it difficult to attack on foot (and Swiss pikemen learned to charge against the enemy, totally upsetting the balance of power).

Firearms made the Infantry Revolution permanent, since even an arquebus in the late 1400's could deliver 1000J of energy to the target; an order of magnitude greater than any muscle powered weapon. Cannon had the same sorts of orders of magnitude difference compared to catapults, trebuchets and so on, making walled castles unviable, and putting power in the hands of those who had enough wealth to afford an artillery train (few nobles could face the Royal artillery train, the King simply had much more wealth).

While you have essentially set your story historically in the mid 1400's (firearms are expensive and still somewhat rare), this state of affairs isn't going to last. The obvious advantages of being able to rapidly field large formations of men without having to pull them from the fields and workshops for prolonged training is what gave impetus to the Infantry Revolution in the first place, and anyone who could get firearms went to great lengths to do so.

Gunners would therefor be grouped in small units. They would be treated much like crossbowmen, and be placed along the flanks of pike or pole arm formations, in order to have protection from enemy cavalry charges or advancing infantry. After firing, they may even retreat behind the pike formation in order to reload, or move to a new position to fire on targets deemed to be advantageous. Cannon will be used either to fire on fortifications, or preset to fire where the commander believes the enemy formation(s) will appear. Since cannon were not very mobile, the ability to move them around the battlefield during an engagement isn't an option. 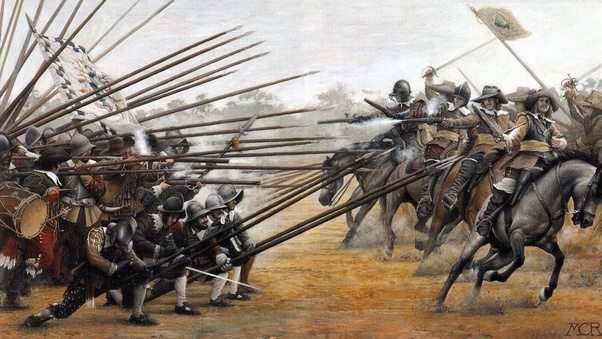 Fighting in the 1600's. The formations and tactics are refined from those of the late 1400's, but a solder from the 1490's would still recognize this formation 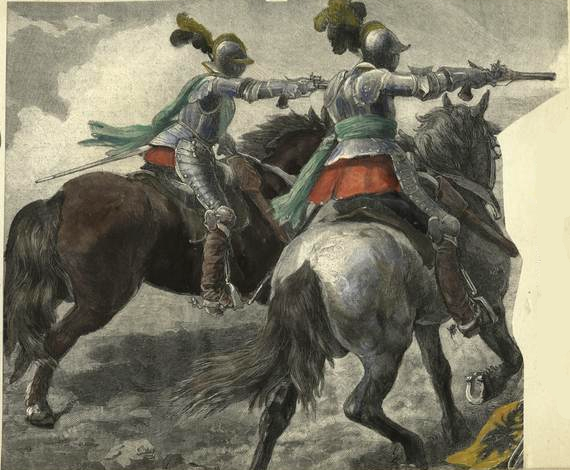 Do you know these bad boys?

They may be the unit you want in your world. Cuirassiers (first appeared in XV century). Their equipment varies, but in your timeline they would be heavily armored (almost like late medieval knights) but instead of lances they would have set of pistols (and maybe even a cavalry rifle).

Well, they are some kind of evolved form of armored knights. When the halberd become popular, lances were no longer efficient weapons because of its range. Then the cuirassiers came, using firearms while charging instead of the lance. The range was obviously better.

Then caracole happened. It was like riding in circles in front of the enemy unit - you are close, you shoot, you drive away to reload, repeat. In our timeline it wasn't so effective, because infantry had superior firepower. And there we have this one, implausible thing. Infantry still would have greater firepower with crossbows and bows. But it may be ok, as in our timeline there were also crossbows and bows while heavy cavalry still existed.

Because firearms are very expensive, this would be a more direct evolution of knights than in our world. They'll be "super knights", who are more safe while charging because they use firearms instead of lances. Then the caracole will appear, probably around the same time as knights will start disappearing. Cuirassiers would be elite units, recruited from knights (and later nobles) because of the cost of equipment.

As time in your world passes and firearms become more mass produced, cuirassiers would evolve similar to our timeline, becoming a more sword focused cavalry with guns, than a guns focused with sword cavalry (as Gustavus Adolphus did with his cuirassiers).

Well, the fact is that gunpowder is credited as one of the reasons behind the fall of feudalism.

With gunpowder you can have cannons, and cannons make short work of castles, so the king has a way easier time forcing any feudal lord into submission. Before cannons, the feudal lord could just entrench in his castle and wait for their enemy to leave due to lack of money or supplies or because of illness, so kings had to think twice before acting against them.

Additionally, guns are expensive, which means that only kings and a few other main nobles (who would soon become kings) can maintain them. Remember that you need to keep constantly employed a corps of artilleryman, gunsmiths and the like, and that is expensive.

The military would probably be a bunch of small units that fight using gorilla warfare and stealth. Each team would probably be largely independent from the others and common practice would be to send them out for long periods of time. The objective would be given before they set out into the wilderness and if the team did not return within a week of the designated return time, they would be presumed dead.

They are survivalists and marksmen. They know how to survive on their own and are hard to track due to their small numbers. I could add more, but I don't really know how to explain them in greater detail.

Not the answer you're looking for? Browse other questions tagged reality-check society warfare military feudalism or ask your own question.

5
How would the introduction of firearms evolve in a society with limited economic development?

12
Re-enforcing a feudal society
11
What should be considered for creating a Professional Army in a medieval based society?
6
What are the duties of a feudal lord?
4
Feudal Title Inheritance
18
How to reconcile a feudal system with a congressional/parliamentary democracy...?
5
How would the introduction of firearms evolve in a society with limited economic development?
3
Army composition in a "Dies the Fire" scenario