Effects of transparent skin on inside tissues/organs? [closed]

Let's say some chemical washed out the pigments in our skin, causing us humans to have transparent skin, and therefore we can look at our internal organs and our blood vessels.

I think you have the wrong perception on what skin is.

Washing "out the pigments in our skin" would, in my opinion, lead to a very white skin. Even if it was invisible then all you would see is fat! And I have no idea what effect would sun on fat have! LE: Vitiligo is a skin condition that does just that.

Vitiligo is caused by a loss of pigment in the skin, due to destruction of pigment-forming cells known as melanocytes. 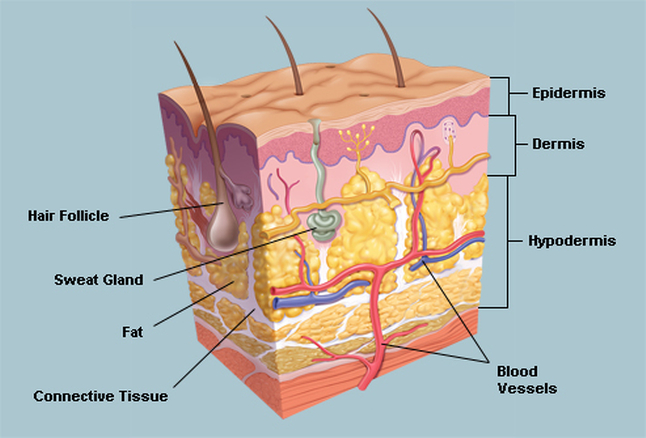 Let's say some chemical washed out the pigments in our skin

This is simply oculocutaneous albinism. Wikipedia states that "Albinism in humans is a congenital disorder characterized by the complete or partial absence of pigment in the skin, hair and eyes." However, this doesn't give you the ability of seeing albinos' internal organs, because you would still have fat and blood underneath.

However, a chemical has actually been developed to make tissue transparent, and its name is Scale. This article gives a good summary of what you need for a body to become transparent:

“For transparency, you have to get rid of scattering,” says Duke University biologist Sönke Johnsen. After 15 years of studying transparent sea creatures, he admits scientists still do not know exactly how certain animals allow light to travel through them. But he does know what ruins transparency: “We observe light when it moves from one refractive index to another. The more indexes it moves through, the more scattering there is.” The varying refractive indices of skin, muscle, and bones make most animals opaque. Scale works by soaking into the cells and creating a uniform refractive index that photons pass through.

I highly doubt that the use of Scale is compatible with life. However, let's pretend it is and let's take a look on what would the medical consequences of having internal organs exposed to sunlight be.

I guess there will be also a change in aesthetics - suddenly, appearance of people involves a beautiful intestine or an elegant bladder. There will be cosmetics for the enhancement of internal organs looks. Also, probably chewed food won't be gross anymore, as we would be able to see it each time someone eats. In short, perception of what's beautiful and what's ugly would change pretty drastically.

cancer, your skin absorbs a lot of UV light. Also your skin keeps making new cells to replace the old ones. Your organs are a lot more vulnerable. You would get cancer all over your organs.-

Not the answer you're looking for? Browse other questions tagged body-modification or ask your own question.

23
Would life expectancy increase if we replaced healthy organs with artificial ones?