Ok, so I have this planet that I am still building.

It is a desert planet, its surfice is almost completely arid with a few exceptions such as snow deserts in the poles. There is sentient life in this planet, they are adapted to endure long periods without water and to survive the heat.

I want this planet to have a huge maze-like cavern system, filled with crystals, as if it was some sort of geode. Inside and below this cavern maze, there should be water. The planet's surface has some crater lakes that lead to those underground mazes, and those crater's water are what would be responsible for non-crater lakes.

What I wonder is, would a planet like this be able to sustain an earthian-like atmosphere? Would a lake crater system like this work?

I was picturing something like geysers opening those holes, but i am not really sure how an atmosphere or how the geode caves would develop in this...

Here a poopy drawing of what I am thinking of 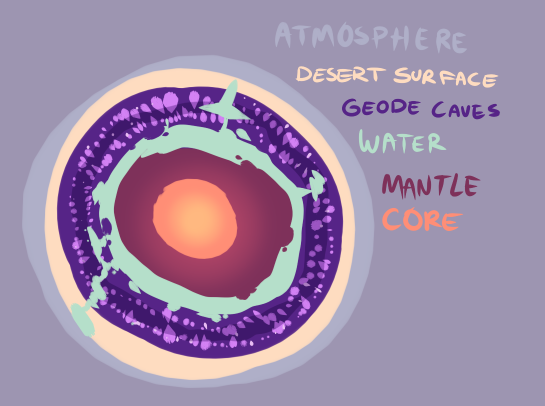 Oh and I was thinking about making it the moon of some gas giant, something to contribuite to the desert planet's heat since I pictured it to be somewhat distant from the sun in relation to what earth is. (i also thought about making the gas giant a venus-like planet with the clouds and all, but i am not sure if this would be possible)

That is not really feasible with rock. Basically, the caves would collapse over time and the rocks sink to the bottom of the water layer, so you'd actually end up with an ocean world which is not really compatible with your vision.

And yes, it would be very hard for the planet to support enough plants for photosynthesis needed to maintain an oxygen atmosphere. You could have the plants in the caves with the water and have the crystal layer be transparent so the plants would also get light. But then people and animals would also live in the caves and never go to the surface and that is not really compatible with your vision either.

I think there is a dodge though. The cave layer might actually be coral like organism colony that has covered the entire surface of the planet. I doubt such an organism could naturally evolve but if one did, it would have near monopoly on photosynthesis and the structure and appearance would match your description.

It would have "caves" for gas exchange and flotation. The caves would be reasonably stable since there would be a biological process constantly regenerating them. It would generate beautiful transparent coral because it needed to conduct light efficiently from the surface to where the water is. There would be "crater lakes" for the sand from surface erosion to fall and not cover the light gathering surface. The caves would have water since the walls would be alive with a source of water releasing constantly water vapor. They would not be safe places for people to live in as the coral would have to have some system of preventing edible plants from growing inside it and discouraging animals eating the coral, so there would be water, maybe even light, but no food. And since the coral would float on the surface of the ocean, the ocean would be covered with caves over it.

The super-coral would only cover the percentage of planet that had ocean below it, so there would still be normal land. But since the coral would vastly reduce evaporation from ocean (most condensation would happen in the caves inside the coral) the land would be arid. The coral would form a relatively thin layer over the ocean, so it might be possible for people to make holes in it to gain access to the water. This might kill local coral though, so long term you'd only get access to saline water of the ocean below. And the coral material might be pretty hard to break as it would probably be something other than what actual corals use.

Ville did an excellent job on the planet and ideas to make it happen. I'm going to tackle the idea of the moon.

A gas giant is large, very large and if it was close enough to be a 'moon', then in reality, your planet would be a moon to the gas giant. it is a relationship of mass. Smaller things orbit larger things.

If two planets (or stars) are somewhat close in size they could orbit each other, but if I remember correctly those would tend to be unstable orbits.

Not the answer you're looking for? Browse other questions tagged planets atmosphere geology water-bodies caves or ask your own question.