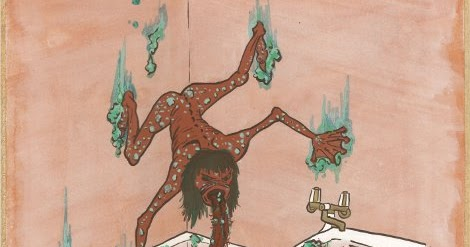 In Japan, there is a legend about scuzzy little creatures known as akaname. These things are said to have a humanoid shape, red skin, stringy black hair, and long slimey tongues. They are said to sneak into unkempt bathrooms at night (which in a traditional Japanese house layout is a separate building and consists of just a bathtub) and lick up any built up filth that accumulates. Could something like this evolve naturally?

The akaname looks humanoid but is actually a type of frog.

Evolving in swamps and bogs, this species would eat the scum, slime, and detritus, using their long sticky tongue to slurp it up from the water and off the sides of logs and rocks. They developed their large size as a means to keep most of the swamp predators from being able to eat them, reaching the size of a small child. An old adaptation has also remained from when they were smaller, they have large suckers on their feet allowing them to climb trees and even hang upside down. They also have hair like black strands that had previously been used to camouflage the frog but is now largely used as a mating display.

As people made villages near these swamps, the akaname largely ignored humans, and humans rarely saw the nocturnal frogs, mistaking them for an underwater stump or large clump of fungus when they did see the sleeping animal.

However that didn't last for long.

As soap became more widespread, the akaname became attracted to the smell. A chemical in the soap, especially after it's had a chance to form a scummy texture acts like catnip for the akaname. They'll come at night to improperly cleaned bathrooms and lick up the scum trying to get high. One side affect is to make them skittish, so when they hear a human they'll quickly disappear, but someone who is fairly small and quiet like a child can catch a glimpse of the creature happily lapping up the soap scum.

The akaname have taken to living in sewers and filthy ponds in human towns and cities, slinking out at night to get their ambrosia, spreading rumours of monsters in public bathrooms and the worst tenements.

There are quite a number of animals that feed on "filth", many of which live alongside us and, indeed, eat dead skin cells, hair, and other waste lying around and prevent it from building up. We call these "detritovores", and examples include dust mites, millipedes, flies, woodlice, slugs, and worms. However, such animals tend to be small and have a generally low-energy lifestyle. It's hard to think of why such a creature would be humanoid.

However, it is worth noting that modern humans produce a lot of still-edible organic waste, which is why scavengers like rats and raccoons tend to congregate in human cities. I would guess that the Akaname evolved from such a creature, growing more tolerant of toxins in order to exploit a niche that their garbage-raiding cousins could not.

If you want a darker possibility, perhaps in a far-future dystopian setting where the divide between the rich and the poor has grown, and the children of the poor have no chance of rising beyond their social class, thousands of generations of poor humans could evolve to live off of more and more meager fare until even bathroom filth becomes a usable food source.

In either case, the creature would likely have a lower-energy lifestyle and greatly reduced intelligence compared to the species it evolved from. Living off of even the most base of resources means the Akaname doesn't have a lot of energy to spare, but being able to eat almost anything means it doesn't really need a lot of brains to get by.

The akaname could have evolved from fork-tongued lizards that evolved to live in caves. These lizards may, in responce to the lack of food in caves, adapt to reduce the size of their body. This may cause the tail to be lost, and the head to shorten. Due to the less light in a cave, their eyes might fuse together, into a single structure for detecting and avoiding light. They may still have a long tongue protruding from the mouth, as it would not be useful in caves. This would mean that it would be the first thing to hit a wall if it walked into a wall. This may cause the tongue to transform into a small antenna. They may later exit the cave into a forest environment. In order to protect against predators, they may start to secrete toxic oils from their skin. They may also evolve to turn red as a warning to predators. Due to their protection from predation, they may increase in size, and become large nocturnal herbivores. In order to allow them to move more efficiently, their tongue may elongate into a long flexible structure supported by a segmented hyoid bone inside. They may later learn to lay eggs in urban regions, where there would be less egg-eaters. To protect the eggs against parasites, they may also learn to clean away scum and mould that may house parasites with their tongue. These changes would make them into an akaname