What's the most plausible way to bio-engineer an underground ecosystem, without photosynthesis, to produce oxygen?

What's the most plausible way to bio-engineer an underground ecosystem, without using photosynthesis, so a mine system would not need an active air exchange system? (It was over 150 characters, again.)

So, inspired by Jim2B's response here:

How low underground could you go?

Assume there's a vast network of mines over hundreds, if not thousands, of square kilometers, and ranging from 5 to 11 km in depth. The upper third of the mine is mostly dry, but the middle and lower thirds have met underground springs. When the mine is eventually abandoned and the miners stop pumping the water out, it will eventually seep down into the lowest portion of the mine and become something like an underground geyser in the vertical shafts that reach these depths.

What's the most plausible and efficient way to create an ecosystem that will absorb the carbon dioxide exhaled by miners and convert it to breathable oxygen?

The two, related, caveats are:

In the real world the most energetic dark ecosystems run of chemosynthesis from hydrothermal vents, the chemical conversions vary but many involve oxidation. hydrogen sulfide, hydrogen gas, ferrous iron and ammonia are the most common reactants

Interestingly these is a weird dual reaction used by Green Sulfur bacteria that actually uses both hydrothermal chemicals AND light but needs such weak light that is it not sunlight it is using but the weak radioactive glow from the vents, and do produce oxygen albeit very small amounts. This is still technically photosynthesis but since it does not need sunlight I thought it might still work for your scenario.

Some minerals release oxygen when heated-- the classic example is sodium chlorate, used in "oxygen candles", which burn iron powders to generate enough heat (about 1000 degrees F) to liberate oxygen, producing NaCl (salt) as the result. Apparently this is about 6.5 man hours of free oxygen per kilogram mixture.

Perhaps you can have a large deposit of such a mineral gradually feeding into a subduction zone.

Or, make things interesting: rather than a stable ecosystem with a fixed location, have a stable ecological front, moving along a large deposit of these minerals, burning at the edge like a coal seam fire.

Maybe the system has an abundance of lithium hydroxide. This chemical, while toxic, can scrub carbon dioxide into oxygen gas if contained properly.

I'm imagining a cave with lithium hydroxide deposits everywhere and clusters of life around them.

Note that the deposits would shrink gradually over time as they're used up, so the life would either need to figure out that fruit juice + copper + zinc + water = oxygen (electrolysis) or move to a different cave with the same mineral deposits.

You want to replicate photosynthesis without sunlight. My proposal: in the place of radiant energy from the sun, use radiant energy sources available underground. 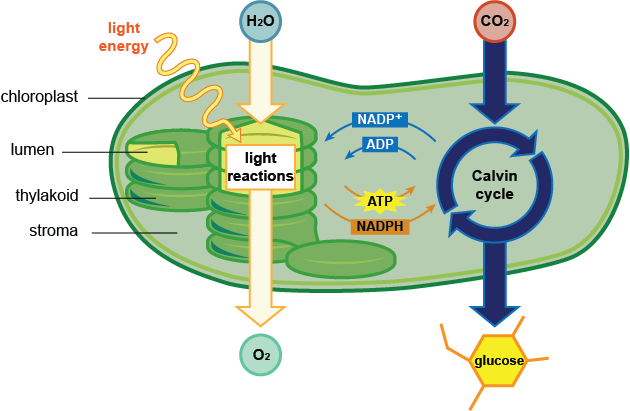 As opposed to the energy in visible light, your underground oxygen generators fix carbon for themselves using alpha radiation. Alpha radiation is produced by uranium, thorium and most importantly for this application, radon gas. Radon is produced by decay of uranium and radium and because it is a gas, it circulates around for a little bit before it decays by emitting an alpha particle. Radon builds up in underground spaces. Either radon or radiation from the heavy elements themselves provides the energy to turn CO2 into O2 and H2O.

Your subsurface creatures need reduced carbon to build their bodies, just as we all do. Their chloroplast equivalents harness the energy from alpha particles to do the work. I can imagine these things growing as a layer on radioactive rocks, or in areas where radon gas is abundant.

CO2 can be found in large deposits underground as is evidenced by the fact that volcanoes kick out huge amounts and so these creatures could evolve in the absence of regular miner visits. I have wondered if ecosystems like this might actually exist. It might be difficult to recognize them and certainly difficult to culture them since they require alpha radiation. I could imagine though that in the company of miners there might be a bloom of such organisms - organic nitrogen is in short supply in the deep earth. Organisms bringing nitrogen down from topside and depositing it in their waste would provide plenty of nitrogen.

A different scheme with the same general idea. Environmental energy is harvested by organisms which straddle a high energy / low energy divide. We do this by harnessing the oxidation of reduced carbon, which would happen anyway in an oxygen atmosphere. Photosynthesizers harvest incoming solar energy which would expend itself as heat on hitting the earths crust.

An organism might similarly capture energy via some molecule which captured some heat energy on the hot side, then released it on the cold side. Probably this would not be a phase change but some sort of isomeric configuration change. Or hydration change. Candidate molecules to mediate this sort of energy transfer via hydration change include metal ions, methane/methane clathrate systems or large organic macromolecules

According to this Answer on Biology Exchange there may not be a need to use a different mechanism then photosynthesis as there exists a version of chlorophyll able to work on the infrared spectrum. Infra red radiation should be abundant in a cave system as you propose as (on earth) the temperature of the ground raises about 30°C/km of depth. This would put the deepest part of your cave system to about 330°C emitting a fine amount of usable energy for your plants. Now the only thing you propably need is a ventilation system in order to make plants survive at these temperatures.

If you have your world in a fantasy or sci-fi setting, you could use mushrooms or any cave dwelling plant life that can convert the carbon dioxide into oxygen (without light) though they would have to be very efficient and produce a large output for this.

You can subtitute radiosynthesis for photosynthesis:

Decades later, scientists discovered a fungus that actually does that:

Radiotrophic fungi are fungi which appear to perform radiosynthesis, that is, to use the pigment melanin to convert gamma radiation into chemical energy for growth. This proposed mechanism may be similar to anabolic pathways for the synthesis of reduced organic carbon (e.g., carbohydrates) in phototrophic organisms, which capture photons from visible light with pigments such as chlorophyll whose energy is then used in photolysis of water to generate usable chemical energy (as ATP) in photophosphorylation or photosynthesis. (...) These were discovered in 1991 growing inside and around the Chernobyl Nuclear Power Plant.

This would solve the problem of energy in a closed ecossystem. As long as there is radioactivity in some places, life will have its source of energy.

As for breathable air, there are four ways to generate oxygen through biological activity. Photosynthesis is just one of them. Check out this article about bacteria that produce oxygen by means other than photosynthesis:

The research team of Dutch researchers and the University of Queensland's Dr Margaret Butler, working in The Netherlands at the Radboud University in Nijmegen, have found a microbe that makes oxygen within itself, which is only the fourth mechanism known by which oxygen is produced on Earth. The others are photosynthesis, which releases oxygen as a waste product, cellular generation of oxygen by bacteria from chlorates and enzymatic conversion of reactive oxygen substances.

The subject of the study, a microbe (provisionally dubbed Methylomirabilis oxyfera) collected from oxygen-starved sediments in drainage ditches and canals in the Netherlands, is one of the so-called NC10 bacteria, first found in the caves under the Nullarbor Plain in Australia. It was thought to be able to convert methane and nitrite to carbon dioxide, so the researchers carried out experiments that traced labeled nitrogen and oxygen going into and leaving a chamber containing the microbes.

The team found the bacteria could consume methane and were producing oxygen by a previously unknown biochemical process.

An engineered bacteria like this one would convert C02 to Ethylene (an energy-dense fuel) and produce 02 as a by-product.

The bacteria could feasibly survive without miners present by consuming the C02 commonly present in (well, passing through) underground water.

If the area is prone to volcanic activity, or contains/contained organic matter, there would be a lot more C02 present in the ground and groundwater. In such a case, one can speculate a storyline where a rocket with a bacteria payload is fired to a distant, suitable asteroid or other astronomical body. The bacteria move into the ground begin their work and by the time humans (or other sentients) arrive to dig their tunnels there is already a small Oxygen-rich atmosphere.

Not the answer you're looking for? Browse other questions tagged science-based reality-check creature-design genetic-engineering bio-mechanics or ask your own question.

26
Plausible biological alternative for normal photosynthesis
8
How low underground could you go?
7
How does the ecosystem of the Underdark/underground world work?

211
What's the most reasonable way to fit Monsters in your Pocket?
2
What's the fastest way for a creature to move across land?
5
What's the most efficient way for a living creature to tunnel through wood?
7
How would an ecosystem based around chemotrophs produce oxygen?
7
What is the most plausible way to rule out string theory?
7
Putting oxygen on the Moon - the easy way
8
Is there a way for human-sized oviparous humanoid mammals to produce young in eggs without going the full marsupial route?
7
How does the ecosystem of the Underdark/underground world work?
5
What's a reasonable location in the body for a bio-implant?