Destruction of modern suburbia by railgun

Jormungandr, the Snakebot of Doom, was intended by its designers to destroy human infrastructure by rolling over it, however it was also provided with the means to accelerate around 30 metric tons of steel to velocities up to 8.5 kps each second, and to resupply its bunkerage indefinitely as long as there is sufficient steel in the local environment.

For the most part, it fires large 6.8 ton steel railgun slugs, each capable of disintegrating into hundreds or thousands of pieces of shrapnel prior to impact, if necessary.

However, it seemt to be overkill to target each human dwelling with 6.8 tons of hyper-velocity steel shot when rather less would still do the job of causing a complete structural collapse such that a house would no longer be considered to be a functional - or safe - house without considerable human effort.

A comparison of a railgun round may be made with a bomb, but the two weapons deliver damage to structures in different ways. A bomb delivers a generalized overpressure wave over a large area, and often a frangible case must be added to include shrapnel which may deliver a penetrating impact, otherwise the overpressure wave either will or will not be strong enough to cause significant damage.

A railgun round or submunition, like a bullet, delivers energy to a target at a single point of impact on a particular vector. If the ballistic object is small enough, the impact energy may cause the object to vaporize like a micrometeorite, effectively releasing the impact energy as a small explosion. A ballistic projectile that does not vaporize transfers energy to the object it impacts as it passes through that object's structure. This slows the projectile and causes a shock wave to travel through the target.

A single big fast projectile would impact a house and punch through, the energy transfer shattering any structure in the vicinity of the shot path, but causing little damage at greater distances. A house could not possibly absorb all the energy from a 6.8t projectile moving at 3-8 kps, and the projectile would eventually impact the ground where it would expend the remainder of its energy, to little useful effect when you consider that the destruction of the house is the desired outcome.

Ideally, the projectile submunitions would be sized so that at their impact velocity, they would deliver all of their energy to the target structure just before reaching the ground. The submunitions should impact at a separation that would give the greatest probability that the target's structure would be mechanically compromised without overkill that would reduce the structure to rubble - the goal here is to cause a guaranteed structural collapse with a minimum of energy, allowing the excess energy to be delivered to nearby target structures.

How much hyper-velocity steel shot (of whatever size is most practical up to 1000 cubic centimeters in volume), applied in a fairly even distribution pattern descending upon a modern first world house at 3 to 8 kilometers per second would it take to cause a complete structural collapse?

By extension, how many such houses might be destroyed by a single 6.8 metric ton disintegrating railgun round?

At those sorts of velocities, heat and fire may become a factor as the shrapnel would be quite hot, but for purposes of this question that should be discounted, as conditions and materials may preclude a fire from destroying any given structure.

In other terms, how much kinetic energy does it take to cause a modern first-world suburban house to collapse? Obviously different construction methods and designs may require more or less energy than others.

At least a car's worth of Kinetic Energy 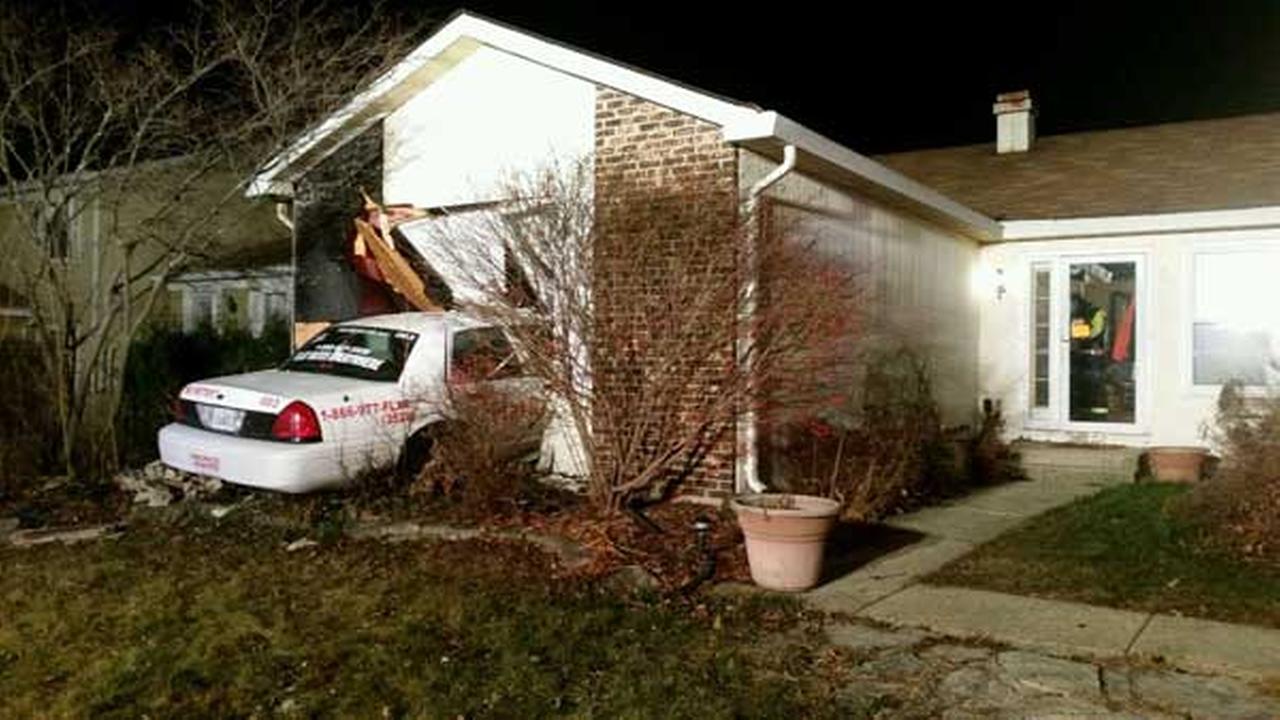 A Car at 40 km/h has maybe 1 MJ of KE per ton. Judging from the above photo, I will estimate that you need about 4 impacts to ruin the house completely, although in fairness no one is going to want to live in a house with a taxi-size hole in the front bedroom. Assuming a 2 ton taxi, you need roughly 150g of material at 5000 m/s to cause the same damage.

Due to random distribution, some houses would likely still be standing intact, some ruined for use, and some completely obliterated. A useful side effect is that since we aren't targeting, roadways will be heavily cratered by whatever shots hit them. All in all, that is a pretty good return on investment per shot.

8
The effect of a 6 megatonne space ship crashing in to a planet
12
How long can New York City sustain the Snakebot of Doom's hunger for Iron and steel?
27
Railgun-launched nuclear warhead
19
Lifespan of abandoned buildings
9
Destroying Hypervelocity Rounds With More Hypervelocity Rounds
1
How could the Kobold Cannon's munition work?
8
Are railguns in space intended to be something that causes massive kinetic damage upon collision? Why wouldn't a railgun shot go right through?
6
Feasibility of active defense systems against kinetic weapons
7
Designing a railgun to disable man-portable firearms