HESH rounds in infantry rifles vs robots: Is it viable?

In the semi-distant future, humans are fighting robots with steel armor tough enough to reliably stop a round fired from a regular infantryman's rifle of the time (say something roughly equivalent to 7.62 NATO).

Someone comes up with what they think is a brilliant idea: "If we can't just punch through their armor, why not let the armor do the punching for us?". This person creates a round the same size as the standard round that operates on the same principles as High Explosive Squash Head (a piece of plastic explosive in a metal shell that pancakes onto the armor and detonates, sending a shockwave through the armor which causes bits of metal on the other side to break away and fly at high velocities through whatever else is there). He tests it against some old wrecks salvaged from some battlefield, and...

The question here is two-fold:

HESH requires a fairly large mount of explosive, but more importantly a fairly low velocity in order to allow the explosive filler to "cake" on the armour before the base fuse detonates it. 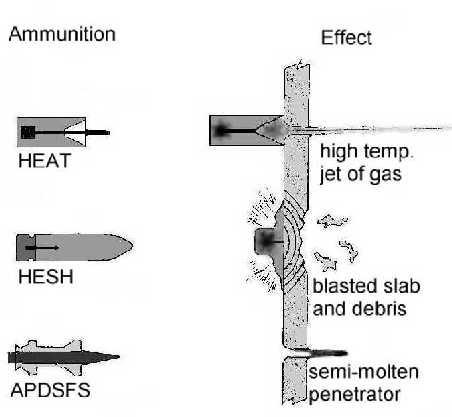 How different types of ammunition work

Rifle calibre rounds are not capable of carrying a big high explosive charge, and are generally fired at high velocity so the shooter has a flat trajectory for aiming.

More modern HEAT and APDS-FS rounds are fired at very high velocities to achieve a flat trajectory (and easier for gunners to aim), and in the case of APDS-FS to generate the kinetic energy necessary to punch through the armour. HEAT rounds convert their chemical energy into a hypervelocity jet in a period measured in milliseconds when a point fuse strikes the armour, so lower velocity really does not change the mechanism of the round.

In order to get a reasonable round that a rifleman could use, go for one of the common 40mm rifle grenades (either fired from the muzzle, or an underslung rifle grenade launcher), which would carry a sufficient explosive charge to make a useful HEAT or a HESH round.

Some types of rifle grenades

This is the pike Missile by Raytheon (still in final testing, soon to be deployed.) 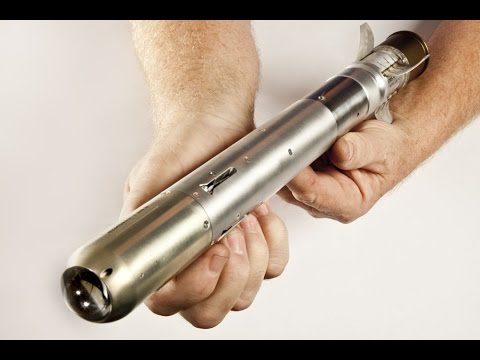 It is fired from a standard infantry 40mm grenade launcher. It is laser guided with a maximum range of 2500 meters, or 2.5 kilometers. It's warhead is an HEDP (High Explosive Dual Purpose) which is to say that it is a HEAT conical shaped charge that also has been optimized to throw shrapnel giving it dual use against anti personnel. As a general rule of thumb HEDP can penetrate twice as much armor as its diameter, giving this missile an optimum penetration ability of up to 80mm of steel armor (a wee bit more than 3 inches).

Its basically the smallest possible guided missile with any sort of real performance. Smaller and you don't have enough warhead to take advantage of the Munroe effect (shaped charge armor penetration physics). Also any smaller and you cant utilize a big enough rocket motor to have any real range. Regular 40mm HEDP grenade launcher rounds would work too but they are difficult to target as they have a ballistic arc and you have to get within 400 meters to have any chance of a hit. In modern combat 400 meters is basically point blank, even regular infantry weapons like the 240 bravo 7.62x51 medium machinegun can accurately engage infantry at 2000 meters. So yeah, I think the PIKE or something like it is exactly what you are looking for. 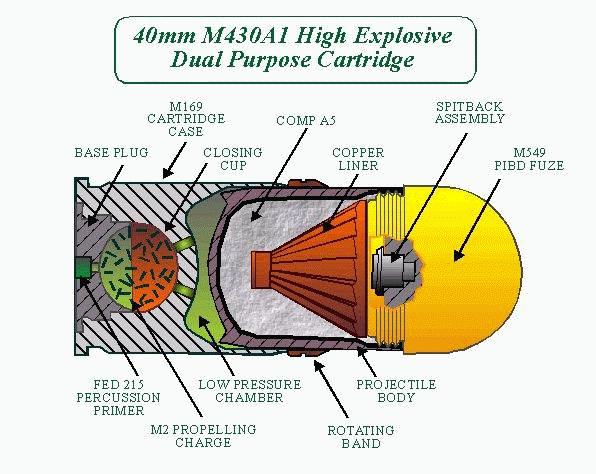 Is it feasible to create a rifle-calibre HESH round for general infantry use and have it fire out of a rifle originally designed for standard ammunition?

Could the spalling from this rifle-calibre HESH round reliably damage the internal components of an armored robot?

It would, but defeating HESH is as simple as a thin lining of Kevlar. That's why the only people still using HESH are the Brits and that's because they don't want to pay for smooth bore barrels and HEAT rounds like everyone else.

Since the 1970s, HESH ammunition has increasingly fallen out of favour as armour designs have trended towards layered composites of hard metal and heat-resistant materials. This type of armour is a poor conductor of shock waves. Anti-spalling devices (spall liners), made of materials such as Kevlar, are commonly fitted to the interior surface of modern armoured vehicles to mitigate spalling effects.

I still don't think that HESH would be necessary. Assuming the robot armor was strong enough to stop 7.62 AP rounds which generally pens 7mm @ 300m. A 7.62 HESH round isn't going to do anything to that either because it's just too small to generate enough force to damage anything behind the armor. So moving up to your 50 cal (12.7x99mm) round you now have AP rounds that will pen 19mm @ 500m which should be more than enough to get through the armor. If not, a 12.7mm HESH probably still wouldn't have the kinetic energy needed to actually damage the armor.

I think that is the basic problem here... your ability to penetrate the armor with AP shells will always be at a lower caliber than with HESH. Think of it like a medieval suit of armor, would you rather attack it with a dagger or a hammer of the same size? Obviously, the dagger would be more effective because all of the force is delivered at one point. You could use a hammer but you'd want it to be MUCH larger than a dagger so it can deliver a force large enough to damage whatever the armor is protecting. In much the same way, HESH rounds are only made in large calibers specifically because they need to deliver a large force to be effective.

Even if you do puncture the armor of the robot, they are not like humans. They don't feel pain and even though they can bleed liquids like coolant in certain areas, there's a smaller maim area than a human and an even SMALLER kill area than humans. You puncture a hole through a robot's leg, congrats, it's still walking just as fast, despite its leg structure being weakened. You gotta get the vital spots. In this case, the precision required is intense, and the amount of missed shots that would occur with such high tech rounds is very costly. I would simply go for EMP disruption tech rather than putting a hole through the thing. Melee would even be a more effective tool than firearms.

There's a reason why nobody is doing this in the real world to tackle increasingly effective body armor: it's not very effective. HESH and HEAT only really work with larger calibres. A 30mm or 40mm grenade launcher would doubtless be a very useful robot killer.

To go through armor, you would use a harder bullet going faster - and ideally bigger calibre. .50 rifles will defeat pretty much any existing body armor.

Not the answer you're looking for? Browse other questions tagged reality-check science-fiction weapons firearms or ask your own question.

3
An assault rifle that can fire homing rounds?
13
Plausibility of deadly air rifles
6
What's more viable as futuristic infantry weapons, rail/coilguns or laser rifles?
1
Viable Energy Beam
9
Can biological material be magnetic?
59
Does a grenade kill you the same way a gun does?
9
Destroying Hypervelocity Rounds With More Hypervelocity Rounds
2
How to best miniaturize firearms? The idea is to go mechanic route as far as possible, assuming massive energy shortage
6
Best shotgun rounds for space boardings?