Earth's had it with the Moon colony's insubordination and independence efforts. The situation has escalated to a hot war. The W90 nuclear warhead is nearing the end of development. The scientists/engineers expect a yield of 6 megatons from the warhead. There is plenty of debate about exactly where the warhead should explode when it arrives at the moon.

One group says that a surface burst near the entrances to the colony would be enough to seal in the colonists and let them starve. Another group advocates for a ground penetrating warhead that will destroy the colony with seismic shock waves. All the primary infrastructure for the colony is buried for a variety of reasons. Earth's intelligence services are unsure the full breadth or depth of the tunnelling nor exactly how many entrances there are. Conspicuous entrances are visible but this doesn't preclude the existence of many other entrances.

Which shall it be, a surface burst or ground penetrating warhead? Each approach has trade-offs. Getting the warhead to the moon with minimal chance of detection has been solved. You just need to articulate which approach will be more effective and why the trade-offs are worth it.

The Earth leaders with nukes don't care about how the colonists die, only that they die. Survival of the moon colony's infrastructure for later recolonization is not a priority. If it's intact, great but that's not required. (We have a hot headed leader with their tiny fingers on the nuclear launch button. He has been offended.)

Unless you are hoping to have the Selenites open the door and let you park the bomb inside, you are going to get no air-burst, for the simple reason that in the vacuum of space there is no air where to create a shock-wave.

You will get a nice EMP and the heat wave to warm up the sun scorched moon surface, but no mushroom cloud.

Your only choice is then to bury the bomb underground with a nice penetrator and let the explosion induce moonquake do the damage.

Straight nuclear weapons in space are almost a waste of time. The energy release is in the form of a spherical emission of x-rays, which cannot be converted into other forms of energy in a vacuum. The massive energy release of a nuclear weapon on earth is from the x-rays impacting the atmosphere and converting it into a hypersonic plasma shockwave.

The other issue in space (or even on Earth) is the energy release is spherical, so the "inverse square" law takes effect:

What is needed is either to land the weapon for a ground burst (to transmit the shockwave through the ground to collapse the colony), or even using a penetrator to allow the bomb to explode under the surface for even greater effect.

Using the weapon as a energy source to "drive" effects is a much better use of the energy of the weapon. Using the bomb to drive a monster HEAT or EFP warhead allows the weapon to be orientated and aimed in space and fire from a distance. The energy is focused and a metal slab can be used to deliver this energy deep into the target. 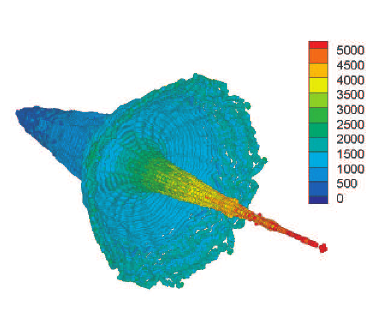 Velocity diagram of a HEAT charge being formed

Since we are now talking about accelerating metal slabs or streams of liquid metal at 3% of the speed of light, small nuclear devices can deliver a massive blow against even a deeply buried target.

The solution is the spaced NEFP. Its effective range is practically infinite. A 1 megaton warhead could propel a 2.7 ton projectile to 800km/s, while massing only about 3 tons. This projectile crosses the laser's effective range in about 30 seconds, gouges out a crater nearly a 100 meters deep and/or cracks the target in half with 2160 kN.m of momentum concentrated on a spot less than a meter wide.

It isn't clear that a 6Mt warhead will radically improve this sort of performance. Obviously a 6Mt warhead can drive a much larger plate and deliver more energy to the target, but it might be more efficient to send 6 1Mt warheads in a hexagonal pattern and deliver strikes which can collapse even deeply buried structures while also being dispersed across enough area to destroy separated structures.

Indeed, using nuclear devices as energy sources allows you to create a cloud of much smaller warheads, and use this energy to destroy surface mounted sensors and weapons systems in advance of several larger devices delivering EFP strikes against identified enemy strong points. Nuclear weapons can drive clouds of pellets at 100 Km/sec, star hot spindles of plasma at a fraction of the speed of light or streams of liquid metal at 3% of the speed of light. 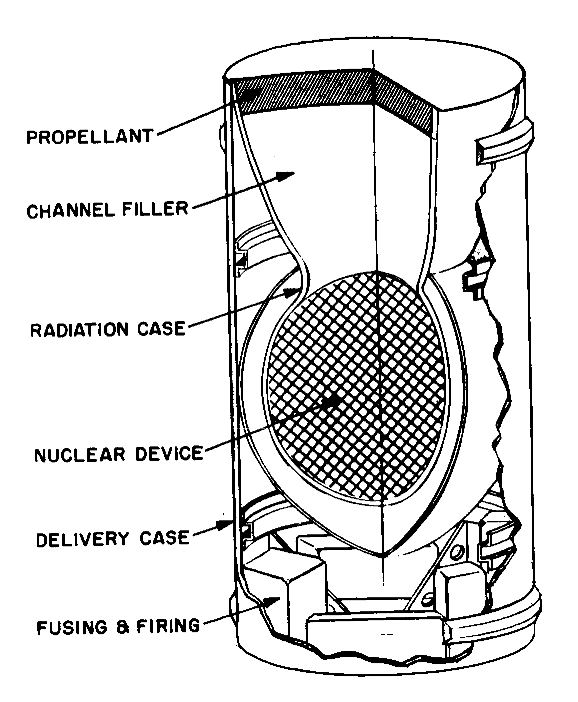 This allows you to target individual structures and ensure maximum damage to those targeted. You can also use this refined targeting to ensure the main living quarters are untouched to reduce collateral damage and provide a great propaganda victory for the attackers.

One of the comments asked why "only" a 6Mt weapon. There is no actual upper limit to the size of a nuclear device. If we want to go "big" (and quite the opposite to my answer), the largest weapon I have ever heard described in a semi-plausible way is a 5000 Mt device. For kicks, it was required to reach Soviet missile fields in 2 minutes, meaning the massive 460,000kg warhead (at 11Kt/kg) would need to be boosted by an ORION nuclear pulse drive...neofuel.com/inhabit/inhabit.htm#cheek_on_bomb. See also worldbuilding.stackexchange.com/questions/60557/…

The other bombs will arrive at their detonation altitudes at that same time as well. One bomb hits the ground, whereas others are interspersed at one hundred meter intervals.

Detonate all at once. That way not only you cover both use cases, you cover most variations for them as well. It would also send a message much more powerful than a single blast.

Assuming that you have access to plenty of these W90 warheads, and are willing to use them progressively over time, then you are best served by using them to destroy all surface emplacements. The reasons for this are two-fold.

It is too hard to destroy what is under the surface

First, I assume that the Earth leaders do not have full schematics for what is going on underneath the Moon's surface. Furthermore, it would be pretty hard to get said schematics by any method other than human spies. The only reliable way to map underground caverns would be seismography from the Lunar surface, which I assume the Selenites would not allow. Without a detailed map of what is actually underground, it is hard to say whether or not your shockwave inducing weapons are going to have any effect.

Second, 6 MT is probably not going to do that much damage to underground structures. There is not a good way to compare vibration for various effects, since vibrations at different frequencies affects structures differently. You can say a nuclear bomb like North Korea's last test made a 5.1 magnitude Earthquake, but unless you specify frequency range, that says nothing about damage to structures.

That being said, I looked for damage to subway systems from recent Earthquakes in areas with subway systems. I found the 1985 Mexico City, 1989 Bay Area, and 2017 Mexico City earthquakes. All three earthquakes caused service interruption due to electrical power outages, and the 1985 Earthquake caused extensive service interruptions due to blockage of surface lines due to debris. But in none of those cases could I find any evidence of damage to the tunnels themselves. I conclude that nuclear weapons are unlikely to cause extensive damage where powerful earthquakes have been unsuccessful.

It is easy to find surface accesses.

These are lit up by their radiation signatures. The moon is cold, especially the sides facing away from the sun. There is effectively no way to prevent IR radiation leakage from a warmer subsurface area. This is basically a corollary of the "No stealth in space" thing.

The moon is not as hot in the middle as the Earth, so the options for digging deeper are more apparent there than thy are on the Earth. If the colonists can build a completely self-sustaining colony, then they could theoretically just keep digging down out of the reach of your nuclear weapons.

But I find that hard to believe. More likely, the colonist depend on outside trade for something that they need to survive; materials required for food production, or generation of oxygen, or what have you. Cutting off whatever these valuable materials are will eventually doom the colony to a slow 'starving' death, no matter how deep they dig.

Not the answer you're looking for? Browse other questions tagged warfare moons nuclear-weapons space-warfare or ask your own question.

33
How would one design an undetectable nuke to hit the Moon with?
11
What weapon would be most effective for orbital bombardment?
6
Could we build and deploy a multi-gigaton nuclear bomb with today's technology?