If a patch of desert were magically displaced to the middle of a forest, what would happen to the whole forest after certain periods of time?

First of all, I am tagging this with the magic because this phenomena is not a result of something natural.

What would happen to a whole forest region if a patch of desert magically appeared at its center? Below is an example of what I am trying to illustrate. 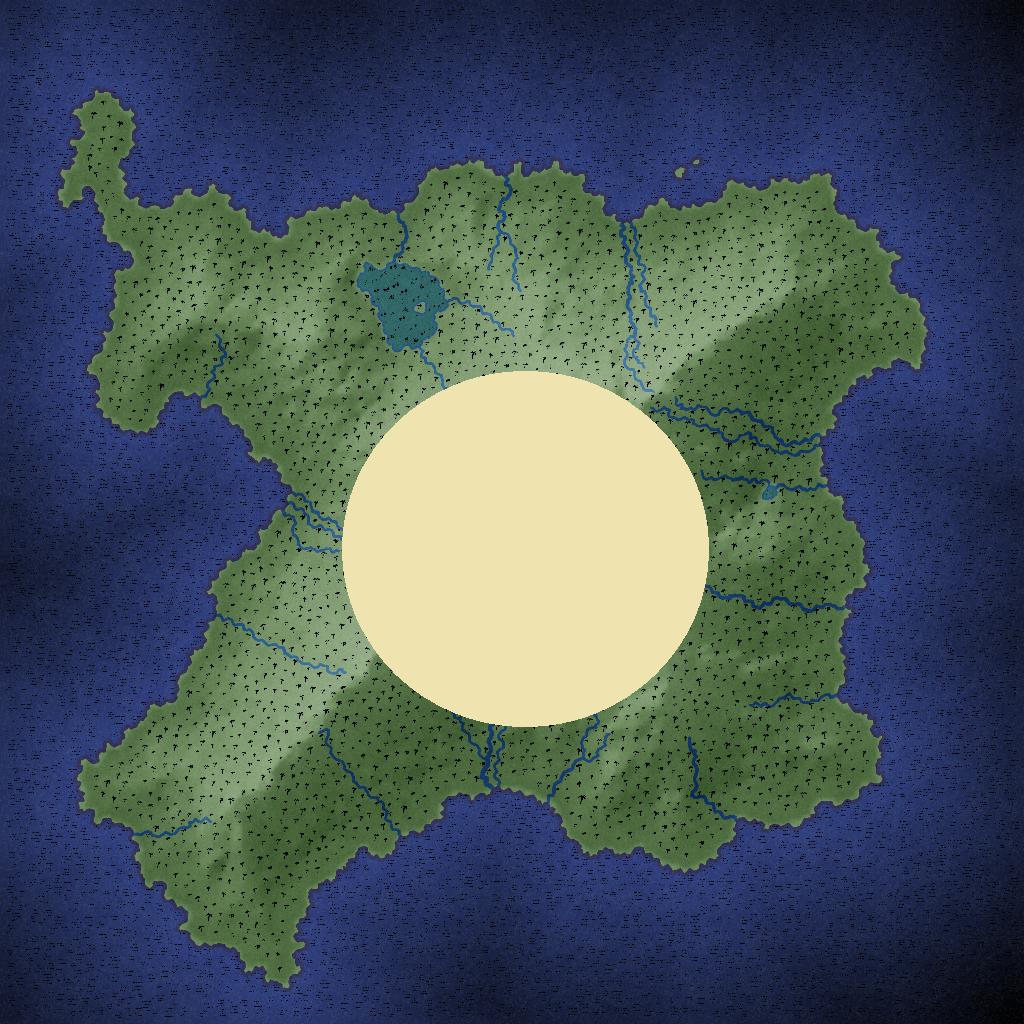 Here is an image to illustrate the elevation.

As you can see in the image, it is like the center of the forest was cookie-cutted and then replaced with this patch of desert. And also, the elevation would be flat.

Question: What would happen to the forest (by forest, I mean the forest with the desert in it) within 1 year and within 5 years?

With my proposition, let us assume that the magic only applies to the magical translocation of the said desert and nothing else. The forest is just a normal forest.

EDIT: This is a little off-topic, but this ought to help you guys for generating maps. If anyone is interested, this is the tool I used to generate this map. This tweet also contains excellent resources for generating something like this.

What happens largely depends on the climate-conditions it is set in.

Most important question: How does this affect Rainfall.

You cut back the Mountain, which could result in less rain because of the missing elevation. If the cross section is to scale, you cut back about 2.5 miles of mountain, which is a lot. It will considerably lessen the rainfall and allow for faster winds on the leewards side. See how this works here

You also eliminated the trees, so the days will become hotter and water will evaporate faster. Trees reflect infra-red and protect the humid air below them from getting blown away. Some historic examples of islands suggest that deforestation can lead to a change in local climate to a more barren one. See Easter Islands for example

Sand heats up much faster in the daylight and cools of more quickly in the night. The turbulence by the hot air from the desert could result in some local thunderstorms. Similar to urban heat island effect

Then it depends how windy the whole region is, and if there is a main direction the wind is coming from.

Also 1 Year is not a long time, you´d probably only have some strange weather and some new rivers. I tried to imagine 5 years with a dominant east wind: 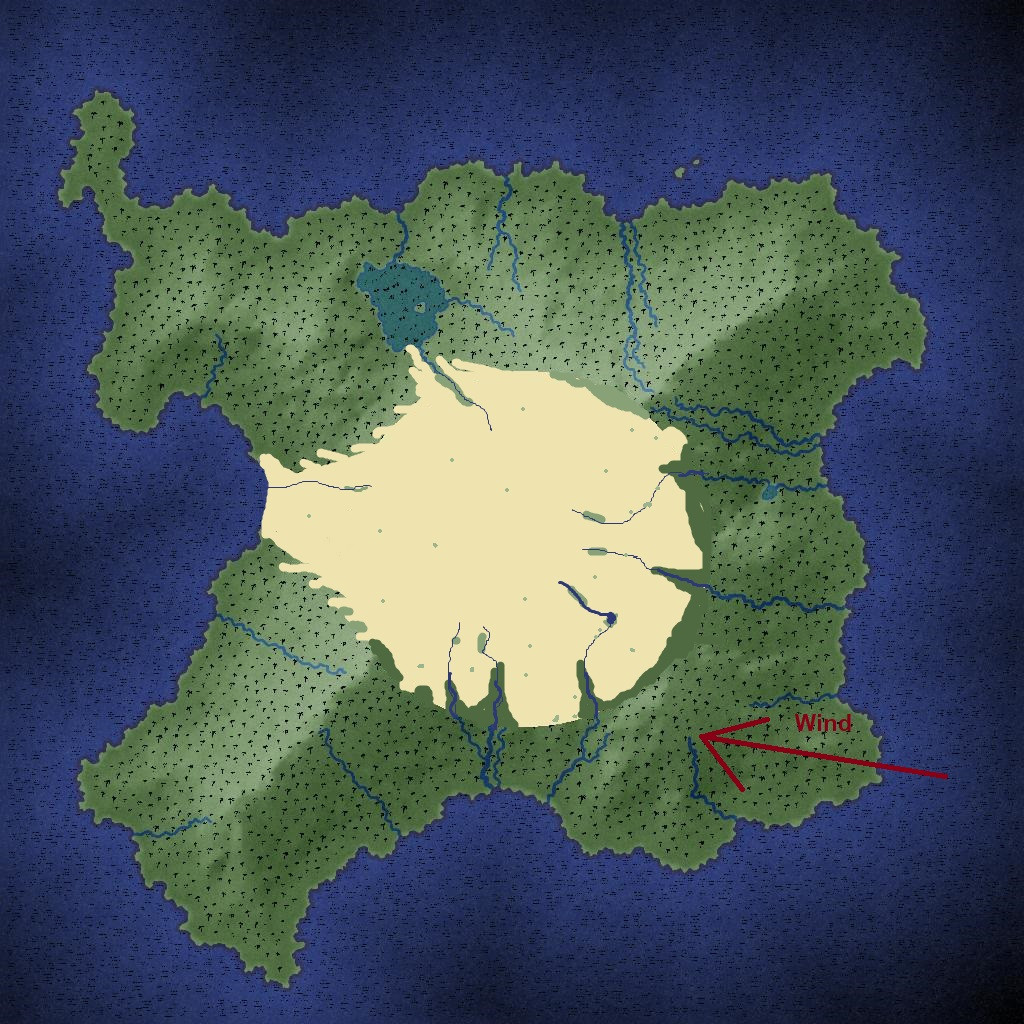 The desert will slowly be overgrown by the forest.

Desert are created from a lack of rain and looking at the map, rain isn't an issue.

Plants will start growing in from the edges and more hardy plants will pop up in the middle.

Leaf litter will build up. Animals will move in and eventually everything will be as before.

I'm assuming this is an island in an ocean and not in an inland lake. Given that, there will probably be a fairly consistent wind pattern and it will have plenty of water in it. (Otherwise there would have been no pre-magic forest.)

The picture shows a mountainous interior, but also seems to show the forest to be pretty uniform. That says that the original mountains were not very high. If the mountains had been higher, they would have cast a major rain shadow and the leeward side of the island would have been dry. (On the Big Island of Hawaii, the windward side gets as much as 20 feet of rain a year, while the leeward side has sections which get ten inches and look like the dryer parts of Wyoming.)

(N.b., if the island was a lot larger and the desert correspondingly bigger, the lack of evaporation from the missing forest would have an effect, and would somewhat decrease rain downwind. At 25 miles this can probably be ignored.)

Your picture shows sand "all the way down". This would have a profound impact on the post-magic development. Because the mountains were low, their removal would have little effect on the weather patterns. So we can expect the rain pattern would be about the same as it was pre-magic.

The deep sand would greatly reduce the speed at which regrowth of forest takes place because there would be no water at all in the top layers -- rainfall would very quickly percolate downwards to the level of the water table which would probably not be that much higher than sea level -- it all depends on how impervious the deeper layers of earth under the original forest were. If the water drains away, it is nearly impossible for soil to develop because organic matter that gets blown in by the wind says dry and gets blown away again. (You see this in the Pumice Desert next Crater Lake in Oregon or in Desert of Maine.)

So recovery would be slow. In fact, if the border of forest was narrow enough, the deep sand would lower the water table under the forest and might actually kill off the forest. My gut feeling is that this would not happen with a ratio of forest to sand as shown.

This is actually a much more interesting question than it looks like on its face. So now we have two 'camps' warring against each other.

Because of the apparent proportion of forest to desert, the immediate effect is going to be a drop off in the humidity levels of the remaining forest, as it lost its most humid portion. This is going to slow vegetation growth and mess with animal symbiosis something fierce. Likewise, the fact that the desert sands send hard rains flooding across its surface, and softer rains just sink deep in below where a tree could get it, it would take generations to build up enough tilth to sustain forest plants. So this sudden desert has a very good chance of messing up the existing forest.

The answer? Eventually, this whole island is going to be savannah/grasslands. The forest animals are very likely to compete over suddenly scarce resources and die out, and those that are left are very likely to kill off most of the larger plants in a desperate attempt at survival. Grasses don't need complex ecosystems to maintain, and are likely to exist where the forest meets the ocean anyways. So slowly, the desert is colonized by grasses, and then the scraggly bits of what's left of the forest will be colonized too.

Let's start with the actual example of the artificially generated desert that exists in the real world, called Błędowska Desert. There are some differences compared to your question but it can give you an idea what will happen since there is no change of the climate. As you can see now the dessert is slowly being grown over and that's what most likely will happen in your world's case. Since you do not change the elevation, the speed of this process most likely will be much faster since the conditions will be much more in favour of the flora restoration. So in 1 year the changes will be probably visible and in 5 year serious (for instance there'll be no longer purely-sand places), however most probably the forest will not be fully back in it's place. Also the increased amount of sand might change the type of initially dominating trees to those having more extensive roots system.

I've missed the original forest line/elevation which means the processes of restoring the flora will be slow, especially initially. Also there are some springs since there are rivers starting in the affected area. We may expect those springs remain so the water supply remain provided, but the river beds will probably change (depending how deep the sand layer is). So the desert will be grown over from edges and plants will show in the areas most humid. Anyway changes within 5 years are going to be rather small and noticeable mostly in the areas where water can be found. In longer run (decades) the dessert will decay and eventually get completely overgrown. The rest of my answer remain fully valid.

As others said, it depends on weather conditions - maybe the forest will retake the land, maybe the desert will grow.

One theory about Sahara desert for example is that the location was relatively fertile and live (savannah-like?) during Ancient Egyptian times, but considerable infestation by Roman legions who wiped out a patch of clean land (no trees - good visibility and protection from night raids) to secure a camp for several thousand people here and there and everywhere over several centuries, combined with not so much rainfall (slow regrowth) and frequent strong winds to carry away the rootless land and cover nearby (not yet cut down) live lands with dead sand, ended up with the huge desert we know today.

10
How to Escape an Impossible Situation Using Minimal Magic?
5
What would happen if a sudden warm spot appeared in the middle of a tundra area?
6
Could a nomadic hunting society survive in a country without wind?
7
Foraging behavior of a forest slime
3
Magical Island question part 2: How to add desert to it
7
What would happen if the oxygen and nitrogen levels were slightly different?
6
How plausible is this volcanic eruption event? Dark Age without total extinction of Stone/Bronze/Iron Age people?
1
How can a desert be converted into a lush rainforest with magic?
4
Would this fire-based magical catastrophe turn a forest region into a desert?