If I made a plant that could float between clouds, what would it look like?

If I had complete control over the plant's appearance, what would be the best shape for it?

I need the plant to be able to float between the clouds. It doesn't have to spend its whole life cycle floating. But it should catch as much sunlight as possible. It should be able to get moisture from the air. A simple microscopic algae could probably get used to that kind of environment, but if that was the case, then we would already have green clouds. So I wanted to improve it.

Then I thought that I could have several smaller balls and a area between them as one big leaf. But the winds up there would probably mess with it too much.

Obviously all of these would need to be frost resistant.

I intend to use them as a minor nuisance during flying and landings on a desert planet, getting into engines and stuff.

The dead plants or probably ripe fruits would drop down and the desert creatures would feed on them. I like the idea of cactii randomly falling on someone. The colonisers should consider these things as annoying as mosquitoes or pigeons on our planet.

What would be the best shape for these algae/plants? And why?

Could plants or microorganisms produce a lightweight gas? This could be a byproduct of some sort of symbiont within the floating parts of the plant/algae.

You only need to look at our amazing Plant Kingdom to see the wonders of what is possible.

Most plants already use some form of airborne mechanism for both reproduction and germination. It is advantageous for plants to send their offspring as far away as the host plant as possible. 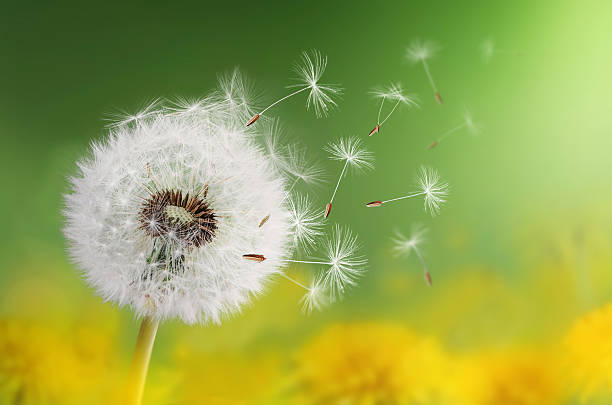 Seeds already commonly float through the air. Dandelions are a good example, where the seeds are so light they can be on gusts of winds and transfer between islands and even continents. Grasses use pollen and wind to fertilise itself, they float through the air and are small enough to become an airborne allergy for those in the area. Some plants also use wind to push the whole plant, such as tumbleweed, to roll to new locations.

The current forms of these indicate for your story the plant needs to be as light as possible, if absorbing both nutrients and sunlight within the atmosphere. Gas is by definition sparse in particles, getting nutrients into the plant is an issue and forming a plant cell for photosynthesis a challenge.

I can imagine however if the atmosphere is thick with airborne nitrates and water, that an organism with thousands of 'threadlike tendrils' in a large 3D web could exist. The most efficient form of cohesive cell structure is a lightweight string. These strings could grow in length, floating through the air, and branch off, in a logical way to minimise evolutionary complexity, and form webs and 3 dimensional matrixes that get caught in wind and float around the planet, like very large dandelions.

Reproduction could also occur by detaching pollen and seeds in similar ways to grass, using wind. This also is evolutionary simple, plants are actually very efficient at what they do and are finely tailored to an environment, and I can think of in air no more simpler evolutionary structure with simple genetic instructions than a lightweight string structure with branches.

You have a few choices for floating plants. One is the gas balloon model that you mentioned. It would likely be just a translucent balloon floating in the sky. I think that it would be translucent because the plant would not want to devote enough weight to structure to make it opaque. Also, that means the chlorophyll could run on all sides since some light would leak through to hit the opposite side. The sides do not have to be strong since internal pressure could be similar to outside pressure.

Another option would be a hot air balloon. The top is clear and the bottom of the inside is very dark with chlorophyll (or the equivalent). Since not all of the light is converted into chemical energy, the rest is absorbed and converted into heat. This heat would expand the air inside creating lift. Such plants would likely sink at night.

The final option is to go small. The plants float like dust floats. The heavier the atmosphere the bigger the plants can be and the flatter they are the better they float. In this case, the plants could be like plankton in the ocean. You might posit wind/rain/turbulence conditions that would cause the plants to clump and fall out of the sky. This might be when the plants mate.

A thicker atmosphere would make it easier for something filled with hydrogen gas to float. The floating plants are actually colonies of the same species with interlocking root mechanisms. The species grow in clusters in the deserts on the planet, the male plant species grows tough but lightweight fibrous root networks that fuse into the female member of the species, the female plants are giant cacti-like bladders that fill with hydrogen and methane produced as a byproduct of bacterial colonies inside the bladder like growths. As the storm season on the planet approaches the ground water content begins to dry up and the plants release their hold on the ground floating up into the sky in big colonies of males and females bound together by root systems. this is absorb as much water and sunlight in the clouds as possible while they are flowering and growing their seeding bodies. The males pollinate the females, then they grow tough spine covered seed pods. Ultimately the annual storm season begins and the lightning storms ignite the hydrogen inside the colonies to explode and toss these tough spiny seed pods over as wide an area as possible. The pods hit the ground and burst open scattering seeds everywhere, the storm season is when water is most plentiful giving the dispersed seeds the maximum chance to germinate.

These plants actually take years and years to grow into a successful colony. They are otherwise just colonies of cacti in the desert unless the very specific conditions to begin the metamorphosis into a floating balloon colony exist they are land bound.

Not the answer you're looking for? Browse other questions tagged planets science-fiction xenobiology flora flight .

4
Desert planet's atmosphere and cavern system?
4
What would the clouds of a planet with 100% surface water look like?
3
I want a layer out of frozen clouds floating around my planet. How could that work?
7
What would a silicone-based plant, especially a tree, look like?
13
Can organic life naturally produce a lightweight substance (relatively) impermeable to a lifting gas?
10
Is it possible to make blazing, flying spores/seeds?