In my book there is violent protesting throughout the city. Peacekeepers have been called to quell any acts of violence, but there are rebels amongst the crowd that attack and kill peacekeepers when they find an opening, then disperse into the crowd again. The peacekeepers can’t just open fire into the crowd so the government designs a sonic weapon for crowd control. From what I have looked into audio frequencies can be used in a Non-Lethal way.

So what I was planning to do was a radar dish like device mounted on an armoured vehicle, (only under attack) would they set the audio frequency to disorientate e.g: your inner ear that effects your balance, muscle control over your body or your nervous system (an extreme form of vertigo and dizziness) in large crowds so that they are incapacitated or unable to get away.

So what I’m asking is this: What weapon would give these desired effects?

The rules to the device are as follows:

I know of the LRAD already (it is a good idea) but what I want is a weapon that will disable NOT disperse crowds. It's more for a large scale capture (they don't want any rebels getting away).

This is an age-old problem for all police forces.

As nzaman said in the comments, there are real, sonic weapons being deployed nowadays by some police forces: 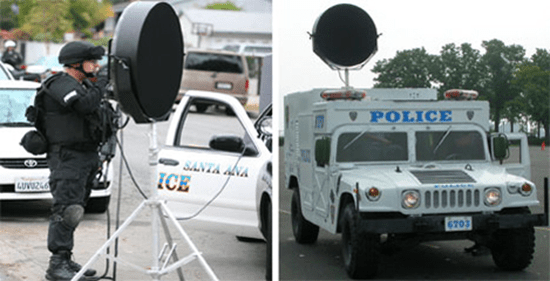 The thing that looks like a drum is called LRAD. It is a weapon that shoots a focused sound beam. According to Live Science:

Its shrill warning tones can be heard at least 1,600 feet (500 meters) away and depending on the model of LRAD it can blast a maximum sound of 145 to 151 decibels — equal to a gunshot — within a 3-foot (one meter) range, according to American Technology. But there is a volume knob, so its output can be less than max, Putnam noted.

On the decibel scale, an increase of 10 (say, from 70 to 80) means that a sound is 10 times more intense. Normal traffic noise can reach 85 decibels.

For comparison, a jet engine sends out an ear-splitting 140 to 180 decibels of sound. Human conversation hovers at about 60 decibels. Permanent hearing loss can result from sounds at about 110 to 120 decibels in short bursts or even just 75 decibels if exposure lasts for long periods, according to the National Institutes of Health (NIH) and other sources.

Anything over 120 decibels is liable to be noticeably painful for some individuals, and 150 decibels would hurt anyone's ears. Such sounds damage small hair cells in the inner ear that convert sound energy into electrical signals that travel to the brain. "Once damaged, our hair cells cannot grow back," the NIH states.

But Putnam said under normal circumstances the LRAD is not harmful. "There's no way it can hurt you unless you have the ability to stand in front of it closely for several minutes," Putnam said in a telephone interview.

The best protection against those things is to be behind them when they are activated. If you must go in front of those, you can do like people who work with heavy machinery and wear ear protectors: 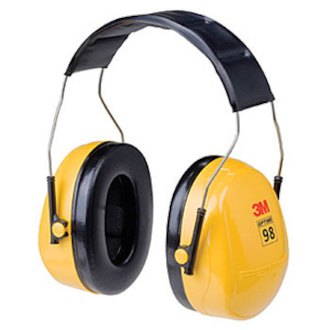 This would be very inconvenient to the protesters, though. Imagine that you are trying to coordinate a large group, trying to picket something, but everyone is for all practical purposes deaf. Alternatively, they could put these on only when the police comes with the LRAD.

For the police, it would be pretty easy to be protected against LRAD itself. A helmet with proper ear protections and a built-in radio communication system, so that police staff can talk among themselves regardless of ambient noise, would solve it. The helmets can be strapped under the chin, so they are hard to remove.

And when the protesters put on whatever protection they have, all the police has to do is go there and pull the protesters' muffs off. Or taze them. It will be much easier to pick a proper target when most of the protesters are either running for their lives or in fetal position.

41
The gun which makes no sound
12
Lethal sonic weapons
8
What materials would we need to have melee weapons and body armor become the norm?

10
Guns and Tasers (lethal and non-lethal) - should we combine them (as a weapon for Police)?
6
Question about non-lethal weapon for large number of people
14
A non-lethal gun
2
Feasibility of nanoparticle crowd control
3
Why would you create a sonic weapon?
18
On what technology would futuristic non-lethal guns be based?
12
Lethal sonic weapons