What sort of claws would be best utilized for melee combat and quickly scaling the walls of a modern day building?

A book that I'm currently writing called Surge, my protagonist, Joseph Norton is an "Ascended", a human that is able to draw upon an energy source called the Nexus (à la the Force) to enhance his physical abilities as a byproduct by having his soul bound to an incredibly powerful and ancient weapon referred to as a Divine Tool. As an Ascended, Joseph can tap into the Nexus to perform superhuman and physics-defying feats such as moving faster than the human eye can track, throwing multi-ton cars with some degree of difficulty and being able to take a rocket-propelled grenade to the chest at point blank (which nearly kills him). Each Ascended has 3 - 4 primary abilities that embody their most dominant personality traits.

Joseph's Electrokinesis also allows him to channel the Nexus through his hands and feet to transform his fingers and toes into electrified claws, which complement his kickboxing and parkour skills by allowing him to rapidly scale vertical surfaces such as brick, concrete or glass walls. I've been trying to figure out what sort of claws would be practical for such purposes. I originally settled on hook-like talons similar to those of eagles (which would've tied into the eagle motif) attached to his character), but when I did research on eagles, I learnt that their claws evolved primarily to restrain large struggling prey, and were poorly suited for combat or climbing.

Are there such claws that allow for both close quarters combat (CQC) and fast climbing?

NOTE: Keep in mind that Surge's setting is modern day

Your hero's claws manipulate electricity. Give him electroadhesive claws. 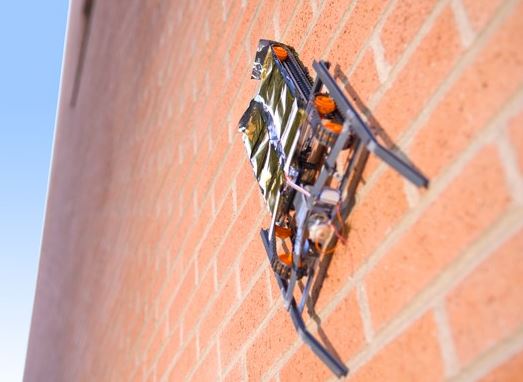 By now, most roboticists are familiar with the myriad gecko-type robots that employ Van der Waals forces (created by microscopic synthetic setae) to cling to walls. Less well-known is the work on an electrically-controllable alternative developed by researchers at SRI International (formerly called Stanford Research Institute) called "electroadhesion". Impressively, the electroadhesive can support 0.2 to 1.4 N per square centimeter, requiring a mere 20 micro-Watts per Newton. This means that a square meter of electroadhesive could hold at least 200kg (440 lbs) while only consuming 40 milli-Watts, and could turn on and off at the flick of a switch! Read on for pictures, videos, and discussion.

Your hero maintains a strong charge on his claws opposite to the surface that he is climbing, and so is supported by electroadhesion. Surface area is king here and so the claws should be many and small. Sharp points might help concentrate charge, in a manner akin to a lightning rod.

As regards combat: instead of clawing with nails and pulling hair, use the electroadhesion property - in reverse. Electrorepulsion would pack a wallop and send an opponent flying. Of course your hero would receive the opposite energy but this is true for a blow with a fist also.

If you want to have CQC and fast climbing you have to heavily sacrifice (or compromise) on the latter.

Think if squirrels or geckoes: excellent climbers but with no CQC skills.

Now think of cats or bears: still decent climbers, deadly claws but surely more limited in their climbing than the first two.

Lucky for you, your character is human, so he can have climb appendices and then wear suitable gloves in case of CQC is needed.

You would need claws capable of moving up on a separate joint with suction pads underneath them. That way if they hit a surface they cannot penetrate like glass, the suction pad gets a grip instead while the claw is pushed up. Lock the joint while fighting or climbing using the claws, unlock it when you need to.

Composition of your claws should be a substance that can impact on concrete or metal without damage. Obviously it has to conduct electricity as well so probably a metal is best.

If you can throw a car I'm not really sure you need claws for melee fighting, that sort of strength would enable you to tear people's limbs off I would think and then hit them over the head with their own arm/leg etc,.

1
Alternative to gravity inside a Dyson Sphere?

5
Subtle harmless use of power to sense or manipulate someone's subconcious thoughts
10
How realistic is the power generation depicted in The Legend of Korra?
5
How can a clairvoyant do good and at the same time protect himself?
4
How can you make someone forget that he has superpowers and lock his powers?
3
Is there a way to trap a super-being like Dr Manhattan?
1
How Plausible And To What Extent Could I Take A Vacuum Based Ability?
10
How do I change this guy's ability so he isn't so powerful?