In a world with no metal resources existing in a usable fashion a civilization with tech similar to that of the Mayans discovers a way to make nanocellulose, the ultimate natural polymer from algae. It is known to be useful in hundreds of applications. Could it be used to make swords, spears or any useful melee weapon?

The properties of nanocellulose are listed below:

The raw material - cellulose - is the most abundant polymer on earth

listed here are the links: https://www.azonano.com/article.aspx?ArticleID=3139

As a reality check was asked for and as you specifically want this to happen for a technology like that of the Mayans, I'd say impossible.

To manufacture this material (as your Wikipedia link explains) requires advanced technologies (ultrasonic homogenizers for example !) and these will be impossible to replace in a Mayan world.

Likewise the minimum energy requirements mentioned are of the order of 1 MW/hr per tonne produced. Coal would be the most likely fuel they could use (although wood would be an option), and typically in a modern high efficiency power station you'd get 1 MW/h with about 1000 lbs of coal - that's a lot. Now Mayans would have no way to reach those levels of efficiency so you could multiple that by a large factor. A typical early industrial revolution steam engine had an efficiency of as low as 1%, so multiply by a factor of a 50 (a modern power station might be 50% efficient) - maybe as much as 50,000 tonnes of coal would be required - this is far too much for such a civilization, IMO.

But even a low efficiency industrial revolution type steam engine would be beyond Mayan technology. It was not an accident it took until the late 1700's to reach this level of tech - it requires a lot of advances in parallel, including more advanced Iron technologies that they would not have.

So I think manufacturing the material is beyond the capability of Mayan technology.

Theoretically yes, you can make a melee weapon out of cheese if you want, but it wouldn't be very effective. In practice stone and wood weapons would be superior. The reason for this is weight, in a melee situation a heavy weapon cannot be parried by a lighter one if the opponents are of equal strength. The heavier weapon will smash straight through the guard and deal damage.

Apart from that there would be much less processing involved using materials readily available already.

These Polynesian hardwood weapons would be similar to Mayan weapons in usage, you cannot block these weapons with a broomstick or baseball bat, you need a heavy weapon to stop or deflect them. So you would be better served using your new tech to reinforce your armour where light weight is an advantage. 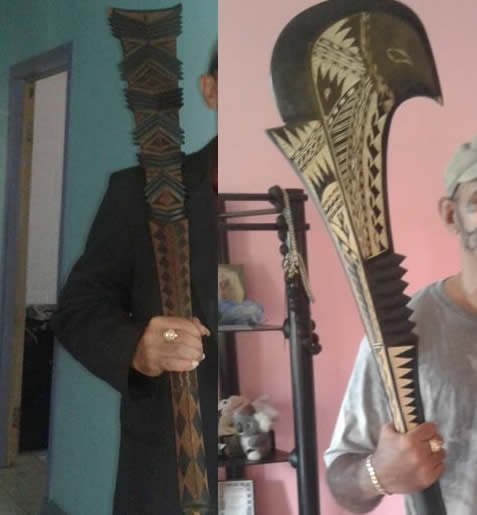 Useful melee weapon? Certainly. But you aren't going to get anything with the qualities of a sword or spear. When cast thin (as would be required for a blade), this stuff is bendy AF and would thus have a huge problem penetrating skin. However, the tensile strength quality has at least one benefit that might be of use as a weapon. If you had to kill someone with nanocellulose in a melee setting, I'd suggest either:

Not the answer you're looking for? Browse other questions tagged science-based reality-check weapons ancient-history manufacturing or ask your own question.

134
Why would giant mechs use melee weapons?
8
Far Future Melee
11
Hammers or Swords? Most effective weapon for mech melee combat
25
Why might plasma weapons have different colors, even when made by the same manufacturer?
5
Weapons for Bio-Electric creatures
15
How do you make a gun that shoots melee weapons and/or swords?
6
Most effective melee weapons for arboreal combat? (pre-gunpowder technology)