Covering up an extinction level event caused by an astronomical anomaly

I would like to know how possible/plausible it is that any space agency could spot an object larger than our sun, that doesn't reflect light, heading towards us in time to give us somewhere around 50 years or so to come up with a solution while in no way alerting civilians to our impending doom. I'd also like to know how close this "thing" could get to Earth before amateur astronomers would notice it.

Another important detail: Gravity has no effect on this thing. Its path isn't affected by the gravitational pull of other objects and it doesn't pull anything towards it.

EDIT: I wanted to add a little more info in case it makes a difference. I apologize for not saying it sooner. Just slipped my mind. I think it's a living thing. Not necessarily sentient, though. And mostly unexplainable. Like something that shouldn't exist.

Sorry if this is getting too far off science-based. I'm mostly considering the means of detection the science-based part. And the reality-check part would be covering it up until civilians found out on their own and how far out it could be and still be detected. Again, sorry if I'm messing this up.

Since you used the reality-check and science-based tags, I will assume that body coming towards us is made of regular matter and, asides it not being affected by gravity, it should behave just like anything else we know.

Since it is not affected by gravity, we cannot detect it by the apparent motion of other bodies.

Since it does not reflect light, we would not be able to see it coming towards us by reflected light like we do with planets. The only way to notice it is when it gets in front of another body. We would detect it because we would see an unexpected spot where something else, such as a star, galaxy or planet should be. This is called an occultation.

If - and only if - we are lucky, it may pass right in front of one of the stars closest to us (Proxima Centauri, Gliese 445, Barnard's etc.), and then we would notice. Otherwise, we will only notice it when it occults one of the planets in our own solar system.

Given that even a half-expletived DIY telescope build by a third grader will allow you to observe the closest stars and all planets up to Uranus, it is very unlikely that the powers that be would be able to hide the fact that something is coming, let alone know about it with much headstart over amateur astronomers.

Edit, because this just came to my mind. Someone might be tempted to say that, as a black body, the anomaly could emit radio or radiation in some other band. However, since it is explicitly stated that it is not affected by gravity, it is implied that it has no mass, and therefore should not have proper temperature, nor emit black-body radiation.

I would like to know how possible/plausible it is that any space agency could spot an object larger than our sun, that doesn't reflect light, heading towards us in time to give us somewhere around 50 years or so to come up with a solution while in no way alerting civilians to our impending doom.

Minimal to zero. That's because Space Agencies don't detect astronomical stuff, University astronomers do, even when they use telescopes owned and run by National Space Agencies.

Said astronomer would analyze the data, wonder what that anomaly is, broadcast it to other astronomers via a public forum (dedicated to astronomers, but readable by anybody) and then begin to track it and generate a projected trajectory. Someone would publish something.

Detection is probably the hardest part because the object doesn't emit and has no gravitational mass. It is a opaque disturbance in space. So the first problem: how does the Unknown Space Agency know the object is there, how far it is, and how fast it is going?.

The only way they can is through occultation and parallax. By random chance, there is some object of little interest to anyone else except the space agency at interstellar distances.

This object of interest or its environs must be wide enough to cover at least about one arcminute. Then, at time = 0 months, the Space Agency sees a dark blob where no blob should be, in position marked as a-red. 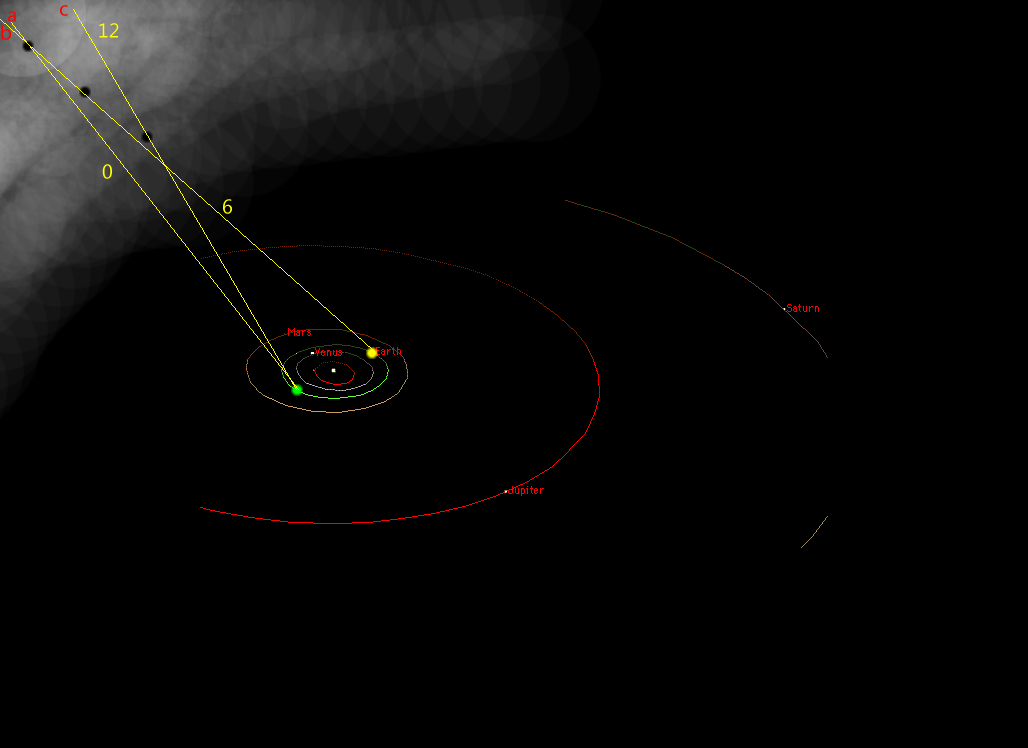 This might also be reinforced by the increase in apparent angular diameter, if the background allows such measurements.

The linearity of the trajectory tells the scientists that the object must be moving under propulsion, because it doesn't seem to follow a conic; and the lack of reactions from the farthest planets, should they be in position, tell them that the object has negligible mass.

Keeping the secret wouldn't be difficult at all - a Sun-sized object might be as close as Jupiter and it wouldn't be detectable except by chance (again).

I doubt that the Space Agency would see the object as a threat until much later. It looks like a dense cloud of cosmic soot, perfectly opaque but nearly massless. When it arrives nearer (but we're talking Jupiter range or less), it will be clear that the Sun's light pressure doesn't dispel it. At that point yes, the likely explanation will be "cosmic swarm of killer machines":

I had not realized (lack of sleep, sorry) that your question is on the same line as this. There is perhaps a way of indicating clear and present danger, if the dark object leaves behind a trail of darkness and/or 'disappeared' worlds, or moves from planet to planet on a constant-angle-of-attack trajectory. This scenario could be integrated with the realization that some large Kuiper belt object has disappeared.

Those looking for, say, Sedna could believe they aren't able to detect it reliably (and it takes some equipment to detect it anyway); realization that the dark object has passed where Sedna ought to have been, on the part of the Unknown Space Agency, would lead immediately to the strong suspicion that the two facts are related. Then even the quiet disappearance of Pluto years later would be immediately spotted. A constant-angle-of-attack trajectory in space spells "Self-propelled. Non-sentient. But alive" to most scientists, because it is not produced by gravitation (hence, propulsion), indicates volition, and yet it is inefficient and wasteful.

At this point the uncertainty about what the object could be, and whether the data are to be believed, etc. might lead to secrecy and cover-up (if the encounter is still fifty years in the future, though, they still might not bother, or rather try to capitalize on the fact. Which would lead to conspiracy theorists vocally declaring that there is no such object).

Somewhere in the Kuiper Belt

The formula for angular resolution is $ size(radians) = \arctan({diameter \over distance}) $. For something with the diameter of the sun (approximately) of 1.39 million kilometers, angular resolution is 39 arc-seconds at the outer edge of the Kuiper belt (50 AU). At this distance, such an object travelling at what seems to be a fairly median stellar speed of 22 km/s for nearby stars, would arrive at it's closest approach in 10.3 years.

Since the object is dark and doesn't create or react to gravity, it might get very close before detection by the public. Especially if it is coming back at an unusual angle relative to the galactic disk. Not all of the sky is being watched at any one time, and mostly we are looking at stars (in the galactic disk).

Even though it's seen, it would be hard for private citizens to prove what is coming.

Since the object is dark, a private citizen who glimpsed the object would have to guess the path and velocity in order to make a prediction that he or she could publish to his peers who would certify the claim.

Such a citizen would, at first, grossly miss-estimate the path of the object, since a physical object that does not interact with gravity is unknown to us at the moment. This would result in an embarrassing first attempt at proving the path. Such a citizen would also likely, at first, grossly miss-estimate the size of the object since it is not creating gravitational distortion.

The closest I think your object would get before it is noticed is about 1 light minute. At that distance, it still only takes a modest 3 degrees of the sky, but that is probably enough to obscure some part of the sky that is being watched. At this distance, the object would be 15 days away from closest approach, if it is travelling at a speed of 15 km/s.

30
How might telekinesis and pyrokinesis work if they were possible?
37
Would humans be able to derive nutrition from foodstuffs found on alien planets?
10
By how much would I need to suddenly increase Earth's gravity to give an extinction-level event?
8
Year marking astronomical event with extreme perihelion precession
3
Likely warning time for extinction event asteroid
2
Detecting an astronomical anomaly
7
Genetic exchange between animal and plant, Elves love trees
7
Artificial Gills: Electrolysis for gills?
21
Why would a supermassive sarlacc-like creature let captured prey wander around inside itself?
5
Channels of fluid heat interchange in the endless underground dimension