In a colony 50 years into the future with few metal resources, but large population on a relatively densely forested (forests similar to those of north america) island similar in size to greenland is about to be invaded by a foreign power. The islanders realize they are about to be attacked, without any outside help to save them. They decide they must arm their population with weapons to neccessitate a guerilla war if their relatively weak military fails. Their problem is that they must create compact assualt rifles or submachine guns using as few moving parts or metal components as possible without compromising too much combat effectiveness. What weapons technology/ designs would be usable in this situation?

Conditions: The weapon must be selective fire (semi or full auto, or semi or burst), it must be compact (carbine size or shorter), it must be very reliable and optimized to work in wet/ muddy conditions, along with cold winter conditions, Easy to manufacture, mid to short range weapon, use as few metal components and moving parts, easy to maintain/repair, decent combat performance, it should be chambered to fire either a 7.62x51mm NATO, a 5.56x35mm NATO, or a 9x19mm if going for smg.

EDIT: this country has a limited industrial capacity based entirely on rudimentary manufacturing equipment sent in with the colonists, before these same invaders. They do have access to a few metal 3d printers, and some plastic ones (limited plastic), they have lots of wood working equipment also and lots of spare parts for each. They also have a mill, lathe, and a drill press. Along with blow torches with limited fuel for welding. They do have a mine, that does produce some metals. They rely for power generation from a wood burning generator.

You're essentially asking us to do your research for you, and I would normally vote to close the question.

The reason I'm answering is because I wanted to point out that firearms in general, and firearm manufacturing in particular are silly concerns for a nation facing imminent invasion.

You've already established that this nation has no chance to resist their invaders. You're preparing for a guerrilla campaign, not a conventional war. So realize that any factories you build are going to become the enemy's property the second they arrive.

If you're going to be manufacturing firearms, you're also going to need ammunition - in very large quantities. So then you also need to manufacture propellant (plain gun powder is about 80 years out of use), primers, shell casings (in the tens of millions, maybe hundreds), etc.

When are you going to build all these factories and mining operations to obtain the raw resources which will be transformed into these finished goods? Even if other nations will not sell you weapons and ammunition, there are a LOT of black market sources of armament where you could obtain both better weapons than what you would be able to manufacture before the invasion, but also other specialized equipment which would come in incredibly handy for rebels (secure communication equipment, explosives, equipment to enable spying on the enemy, etc.)

And so, allow me to reiterate: manufacturing firearms is literally the last thing you need to worry about. Worst case scenario you can ambush the enemy supply convoys, and steal weapons and ammo.

The much bigger concern is who among the population is going to be coordinating the resistance? How will resistance cells form? Where will they be located? How will they communicate with other cells? Coordinate with one another? Do they know anything about secure communication techniques? Do they have any training whatsoever in guerrilla tactics?

Your resistance members will not be able to walk around with carbines, by the way. Pistols are much more easily concealed. But even more likely, they will carry no firearms at all, because that would be a dead giveaway that they're rebels. So what sort of hand-to-hand combat training do they have? How about with bladed weapons? Can they manufacture chemicals on the down-low, and poison an entire garrison's water supply?

Those are useful skills to have. Coordination. Communication. Manufacturing an improvised explosive or poison out of innocuous, widely available items. Leadership, most of all, is critical. A system of safe houses, and supply caches (even if only food, radios, etc.)

Manufacturing weapons is a useless endeavor which is going to waste time, and resources. Instead, focus on organizing the actual resistance, and if you can buy some guns, so much the better (and maybe not even military models, but SOME kind of pistols, or hunting rifles in popular calibers).

Note: I'd also like to point out that there's a major push toward 3D printing right now, and that there exist designs for 3D printed firearms which are freely available to the public. In 50 years I would imagine that industrial 3D printers would be very widely available, and very much capable of printing those open source firearms.

You've set up a situation where ammunition for standard firearms is going to be the main problem. Guerrilla wars (especially ones without foreign support) are long wars, and on-going supply is a key issue. It's hard to imagine them supplying any significant quantity of automatic weapons for any length of time.

Your population might be better off with knives, improvised pistols, cross-bows and a stock of explosives.

I'll echo those who answered before me by essentially saying that your colonists would have their work cut out for them. Given their lack of expertise/resources, I'd say their best hope for gun manufacture would be zip-guns which are basically functional firearms made with improvised materials like this pipe shotgun: 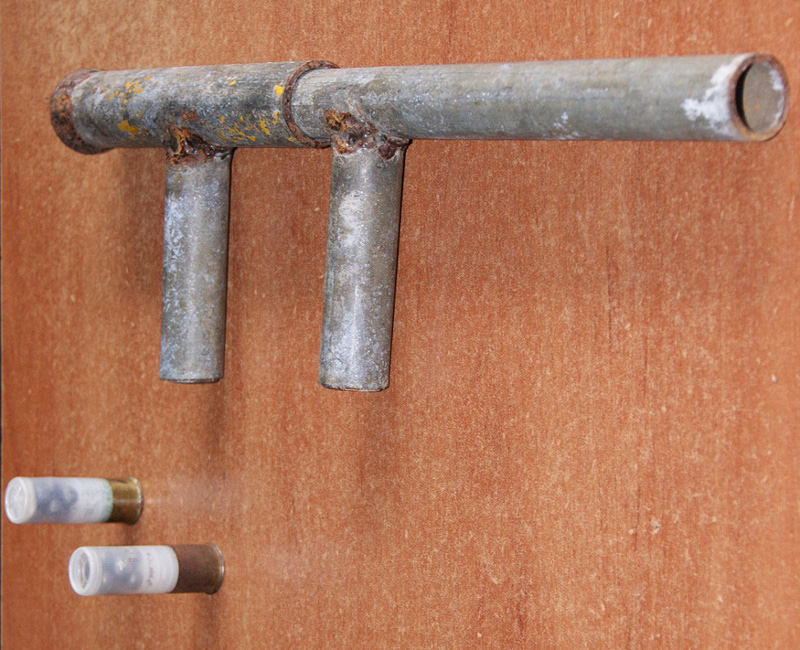 These can be made with materials your colonists may have at hand and can be dismantled and hidden to look as though they're not firearms to hide the motives of their owners. Another, less conspicuous, pipe shotgun: 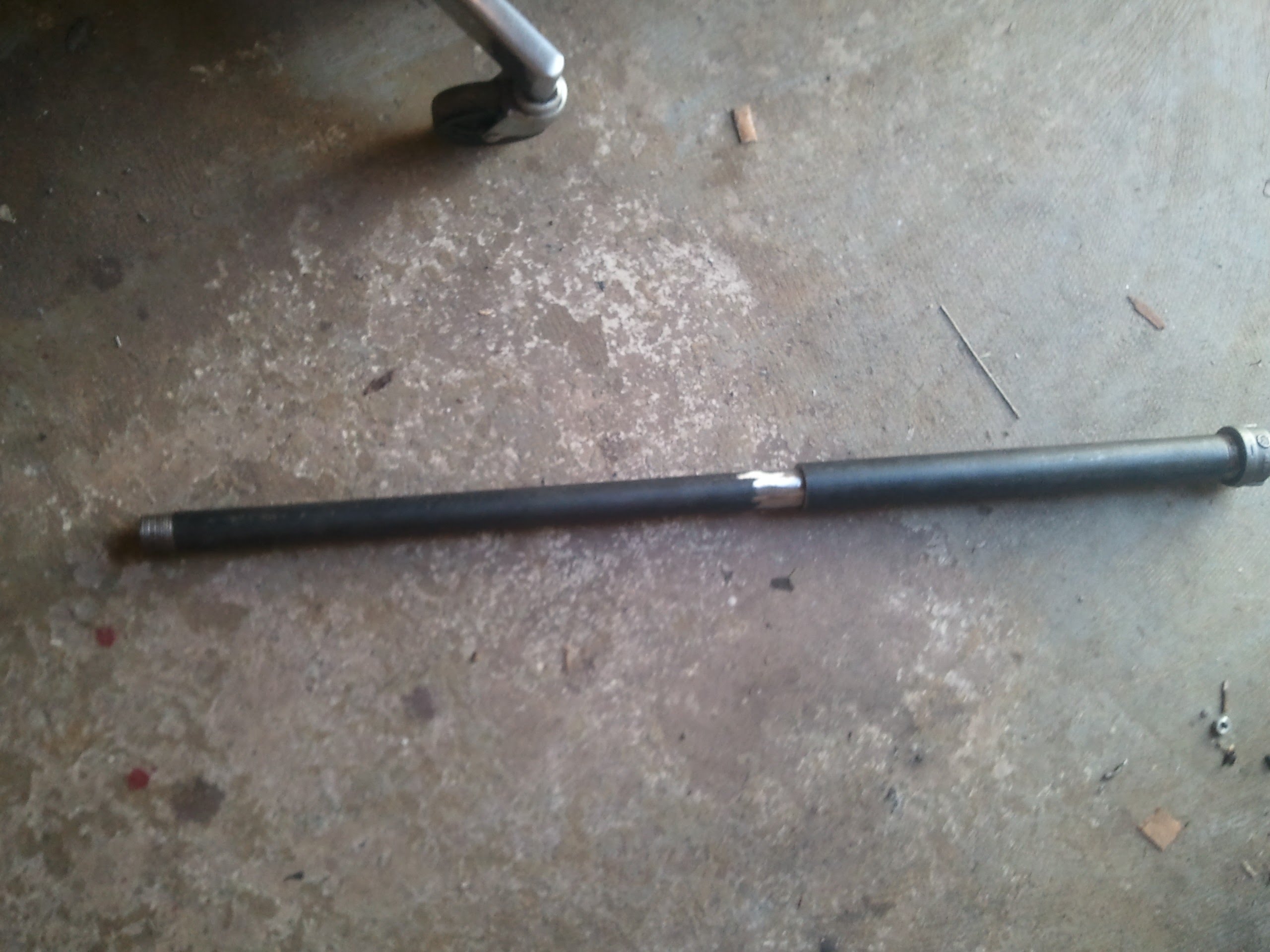 Manufacturing weapons is almost a trivial exercise today, much less in 50 years from now. There are weapons like the Sten Gun from WWII which were essentially designed to be built in home workshops out of sheet metal, and near the end of WWII the Germans were developing assault rifles along the sorts of conditions you describe. The AK-47 and successors are largely designed to be built out of metal stampings, and along the border of Pakistan gunsmiths build replicas of virtually every Soviet era weapon in workshops by hand.

A somewhat more difficult issue is manufacturing and storing quantities of ammunition. Modern ammunition is manufactured to high tolerances and with attention to quality control in order to reliably function in weapons and have standard ballistics upon firing. Storing ammunition is also an issue, since the complex chemicals in ammunition (primers, propellants, tracers and incendiaries if used) do not react well to being exposed to varying temperatures and moisture for prolonged periods.

The last issue is more strategic rather than tactical. How do you propose to fight the invaders? Since you do not have the standing military forces or militias to fight the enemy head on, you will be driven by circumstances to use guerrilla warfare or even "4GW". This precludes trying to match strength on strength. A good definition of 4GW is here:

Fourth-generation warfare (4GW) uses all available networks — political, economic, social, and military — to convince the enemy’s political decision makers that their strategic goals are either unachievable or too costly for the perceived benefit. It is an evolved form of insurgency. Still rooted in the fundamental precept that superior political will, when properly employed, can defeat greater economic and military power, 4GW makes use of society’s networks to carry on its fight. Unlike previous generations of warfare, it does not attempt to win by defeating the enemy’s military forces. Instead, via the networks, it directly attacks the minds of enemy decision makers to destroy the enemy’s political will. Fourth-generation wars are lengthy — measured in decades rather than months or years.

The Sling and the Stone: On War in the 21st Century by Colonel Thomas X. Hammes USMC (Author)

In that case, using firearms might actually be counterproductive. In The First Intifada, the non PLO leadership actually forbade the use of firearms and other weapons, trusting the images of rock throwing Palestinians vs armed IDF soldiers and Israeli police would turn public opinion against the Israelis. (the Second Intifada failed because the PLO leadership took control and promptly ignored the lessons of the First Intifada, causing any goodwill towards the Palestinians to evaporate).

11
What non-metallic materials would allow making guns and bullets?

56
How do I defend an island nation from attackers with 15th century technology?
50
How to add tactics and maneuvering into space warfare
5
Unplanned Colony: what industrial level could be recreated in the short-term?
6
Production of ammo in post-apocalypse - problems and solutions
11
Creating a scientifically semi-valid super-soldier, part 8: Communication
6
Firearm ammunition surviving 200 years
2
Mechanical-electric firearm ignition
2
Barrel length of a metallic hydrogen firearm
1
Muzzle velocity of a metallic hydrogen firearm
9
Detecting offworlders with cameras