Visibility of explosions from space

I'm trying to figure out whether spacecraft could see explosions occurring on the surface of a planet, or under what conditions they could.

Given a spacecraft equipped with a duplicate of the Keck telescope, using visible light only, watching a planet similar to Earth, at what distance could it see the explosion of one ton of TNT, occurring at sea level at night under a clear sky?

You could see it.

An explosion on the moon equivalent to 5 tons of TNT could be seen from Earth. 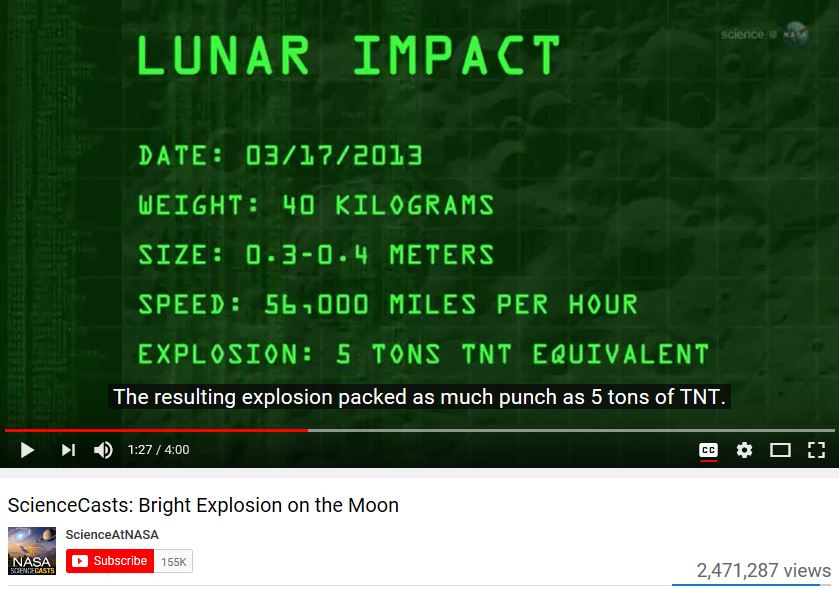 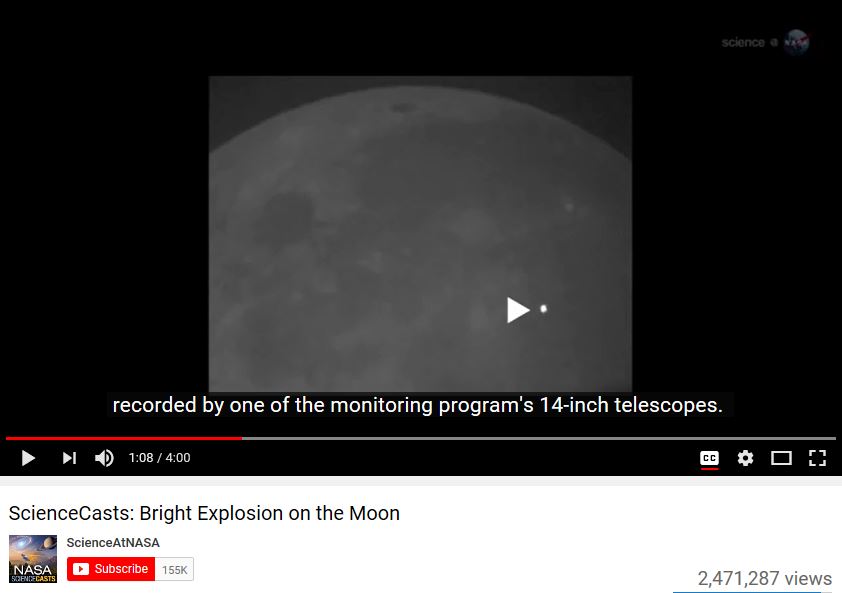 Earth is a lot farther from the moon than an orbiting spacecraft would be. The Keck is monstrous compared to the 14 inch telescope that took these images.

Also, I think that an atmospheric explosion would be a lot more luminous. The light emitted here is all from hot vaporized meterorite and moon - that is all that is there. But on a planet the atmosphere would heat up also. That hot luminous gas would expand and so the total area emitting light would get larger and larger.

The light would also need to penetrate the overlying atmosphere which is a factor against detecting a planetary explosion from space. Although that light from the moon was able to penetrate our atmosphere just fine.

I am afraid you can't observe a tiny explosion from space.

The Keck is a telescope built for observing distant stars: this means it is designed to take long exposures of dim objects.

On the other side, if you are looking at a planet surface from a close orbit, you have two problems:

If instead you are orbiting far from the planet you become limited by the resolution of the optics.

XKCD has already answered to something similar to your question:

Unfortunately, our desk is moving across the telescope’s field of view about 600 times faster than the Moon. Tracking is unavoidable.

The strange thing is, the desk really isn’t moving all that fast. Hubble is just really slow. To track the surface, it would need to rotate less than a degree per second at maximum.

But Hubble wasn’t built for surface tracking. The telescope’s top rotational (“slew”) speed is only a few degrees per minute (about the speed of a minute hand on a clock) and even those speeds are fast enough that its gyroscopes cause it to vibrate, which destroys the image quality.

This is the William Myron Keck Observatory, with cars for size comparison: 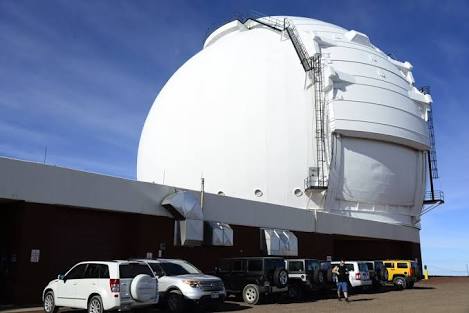 This is the WorldView-2, a satellite of the kind used by Google Maps. It is 4.3 meters tall (about the length of a Ford Fiesta), so it is much smaller than Keck. Its imaging sensors have resolutions ranging from 46 to 184 centimeters, meaning that on a picture, each pixel would be that wide. It orbits the Earth between 772 and 773 kilometers above sea level. It is also old and has outlived its mission plan. 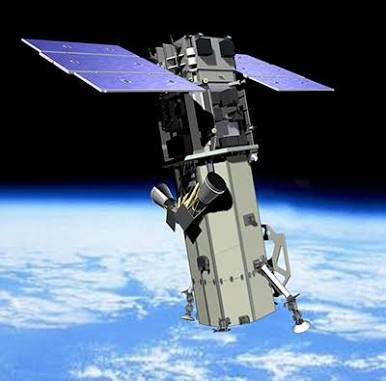 Tomahawk missile yelds are rated as equivalent to around 0.5 tons of TNT. Here is a video with some sample Tomahawk strikes.

Put it all together, and I think you can get the job done with something much smaller and simpler than Keck.

Notice that Keck is designed for astronomy, not for planetary surveillance. Astronomy oriented telescopes, whether on Earth or in space, take their time when taking pictures. I believe that if you did actually send something akin to Keck to space and pointed it at the Earth, its view of the planet would be as bad as Hubble's. Think of a robotic spacecraft equivalent of Mr. Magoo.

Yes but the telescope needs to be pointed at the right place at the right time and have someone watching or at least recording.

At night it's even easier. A human eye can see a candle flickering at 30 miles on a dark night. Seeing an explosion at night with a telescope is easy.

Not the answer you're looking for? Browse other questions tagged science-based space telescope or ask your own question.

15
What impact is required for a visible (from Earth) ejecta plume on Earth's Moon, and would the Moon survive?

24
What effect would liquid sulfur oceans, sulfur dioxide in the atmosphere have on visibility, sound propagation and other environmental information?
17
Could a large radio telescope survive interstellar spaceflight?
3
No More Looking from the Same Side of a Mostly Liquid Surface Terrestrial-based Moon
22
Is a “long exposure”-like night sky possible?
7
Possible sky colors compatible with life on earth
7
At What Point Does a World's Twin Planet Disappear, from the Viewer's Perspective?
3
Can a Sunset Be Black (Infrared)?
4
Can an Insect's Pheromones Be Visible?