I’ve been trying to create a water planet with certain aspects. I wanted it to have a breathable atmosphere and to be a microgravity environment. I’m developing humanoid characters that can breathe both water and air, and I wanted them to be able to swim in the water and also fly/float in the sky (but let’s focus on the environment in this question).

Every possibility that exists in reality had some serious problems, so I ultimately decided to go with an artificially constructed world so as to counter any issues that would come up in nature. In other words K 2 or 3 aliens created this place (for reasons that will be dealt with in the story).

And here's the rub: I was reading another question- How dense of an atmosphere do I need to "float" an ocean of liquid at 1000 ft elevation? asking about basically an ocean in the sky. Because I like fantastic environments in sci-fi (and impossible to answer questions) I decided to add that extra problem, er… element to my water planet.

So here what I’ve got (see diagram): It’s an artificial construct, a shell world which is filled with air, that is covered by an ocean, that has an atmosphere; and the whole thing is small enough to be a microgravity environment but large enough to retain its ocean and atmosphere. I don’t know how big this thing is though. Me am not good with da maths.

At this point I don't know how the interior would have light (artificially?) but I'm hoping that all three environments- atmosphere, ocean, and inner shell world, could be habitats that a being could travel between and live in. To that end I was thinking tunnels from the inner shell world through the ocean past the surface of the ocean and out into the sky. Maybe that could work? If you don't think so then disregard the tunnels suggestion. I'm starting to think it would actually be detrimental instead of helpful.

Incredibly Strong Shell (see diagram): could a powerfully built tensegrity or geodesic sphere do the trick? 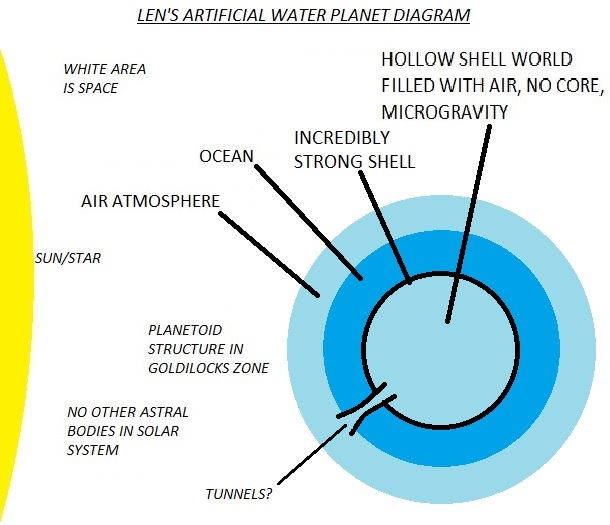 Edit: This construct is an experiment by an alien species trying to invent new habitat for beings to live in. We can assume they know what they were doing but I allow for the possibility that the construct wont be stable forever.

So, is this construct possible? If not, please tell me where I’ve gone wrong and how it can be made to work. Thank you.

Unless there is some sort of constant weather control in place, the inner side of the sphere will be filled with water pretty quick. Water will evaporate and air humidity, even more so there than on Earth due to lower gravity. The humidity will disperse through the air and make it into the inner side, where it will condense and rain. Since liquid water is denser than air it will displace the air at the middle.

It is easier for water to go in than out, because even though the gravity at any point inside the sphere is lower than outside, the total energy cost to go outside increases the closer you are to the center. In other words, water goes in, but water does not go out. Depending on the planet's size, mass of the water and aperture of the entrances, it might take days or millions of years for all the water to get stuck inside the sphere, or for the sohere to be so full that no more water goes in.

Needless to say, the shell must be made of handwavium in order not to collapse, not only due to the planetary gravity itself, but also the weight of the water over it. The internal air pressure wouldn't support it for long since air is compressible and there is a huge escape path through the tunnel.

If you want a measure of the minimum mass the planet should have to hold an atmosphere and ocean, refer to this other question that you made. It is one of my favorite questions in this site. I think kingledion's answer is by far the best one.

And finally... Don't try to explain the world to much. No one questions artificial gravity in Star Trek, Star Wars, Avatar etc.

A world similar to the one you propose was described in John Patrick Lowrie's Dancing with eternity. It has microgravity and there is water at its core. Due to the low gravity whales jump kilometers into the air and then fall back very slowly. The only explanation of how that planet came to be is that a raging nerd cut an existing moon's insides with lasers in order to prove a world building point and win a bet (I'm not kidding, it's part of the plot) (also, not world building as in this site, but as in actually sculpting whole planets). You won't be arrested by the sci-fi realism police if you do something similar.

As this is a reality check I'd say : Not possible.

Your big problem is maintaining an air atmosphere (and I am presume something like Earth's).

To do that you basically need a surface gravity of about one gee. Anything less and the atmosphere can escape into space over time. You are particularly constrained by requiring an air atmosphere and (at the same time) a liquid water ocean on the surface. This restricts the sizes you can get away with.

To get that you need to account for the mass of the water and the air in the core. The gravity at the surface of the water will need to be about one gee.

That gravity is given (approximately) by :

because the gravitational effect of the 1000 ft ocean is small.

Note that the microgravity is a dead duck. The gravitational pull at the edge of the air core is one gee (or whatever we need to maintain an atmosphere outside) and will decrease slowly as we get to the interior. It will only be microgravity near the center of the core itself.

This means we need either a very large or very dense core. As much as $4500$ times Earth's radius.

But problem with that is preventing the gas in the interior from compressing. It simply will not stay at a nice even density - it will gravitationally collapse into a dense (probably liquid) inner core and a much less dense outer core. You'll end up with a mini gas planet inside a shell with no way to prevent them from destabilizing and "wobbling" into each other in the long run.

The outer core won't have enough pressure to support the shell and prevent it "wobbling" (sorry to keep using that "technical" term :-)).

Even if we ignore this and somehow (magically) give you a constant density in the core, the problem become that tunnel. That tunnel needs to be sealed, perhaps with an airlock like structure. Why ?

To get an Earth-like atmosphere outside the sea you need a roughly Earth-like density for the air at the surface. To get that with an open tunnel you need the density of the air inside the core to be the same (not more, not less, but the same) or there will be a flow of air from one to the other.

So what would happen the air in the core : it would collapse into a star (initially, probably) and then eventually become a black hole. Your shell would become a Dyson sphere orbiting a huge star at a distance I suspect would be inside the star's atmosphere. It would be vaporized.

Now I do not think any combination of numbers will produce a stable (or even nearly stable) shell with an air core, water ocean and air atmosphere.

Even if you seal the tunnel I don't see a way to avoid the liquid core happening (even if you can somehow avoid a star being created).

Not the answer you're looking for? Browse other questions tagged reality-check space-constructs solar-system megastructures macroengineering .

21
How dense of an atmosphere do I need to "float" an ocean of liquid at 1000 ft elevation?
5
How can a small planetoid hold an atmosphere under artificial means?

48
(How) can I provide reliable water sources in a world of flying islands?
3
Can this type of winged humanoid possibly work? See diagrams
2
Could soft matter infused with nano or pico sized magnets be used to clump together so that we could create environments with it?
6
How to keep this artificial water planet from evaporating or freezing?
3
Reality check: multi-shell worlds and rotation
1
Creating a Matryoshka Shell World: Sectioning
8
Water planet turns into desert world without being rendered uninhabitable
0
Feasibility of a gas giant made of oxygen and water vapor?
4
Could Uranus have a solid surface due to its internal composition and lack of internal heat?
1
Hypothetical Material used to construct shell for (this) shell world