How tall can a tree grow?

In my fantasy world I want fantastically large trees, particularly in the height category. The tallest trees on earth grow just over 100 meters tall. Why can't they get taller? What circumstances would allow a tree to grow taller?

Currently I'm growing my trees in micro-gravity, in a sterile environment with no diseases to kill the trees, and with little to no wind to knock them over. How tall could my trees get? What else do I need to take into account if I want my trees to grow to several kilometers in height?

Water movement appears to be one of the big limiting factors in tree growth. It appears on earth that 120-130m is about the maximum height of a tree. It gets harder and harder to get water up to the top.

So the easier thing to solve would be a smaller gravity. The other would be for a stronger 'pump' action maybe a symbiotic microbe that helps move the water up. Or maybe the tree has reservoirs to collect rain water, though those voids would make the tree susceptible to breaking.

After that then it is a matter of having enough nutrients to continue feeding such a giant, as well as a base to support it. The larger a tree the greater the forces are for wind (longer lever) etc.

Oh, and I'm not sure how well they'd do in micro-gravity, Some gravity would be better, Mars or the Moon (WAG-IMO)

I think a lot could be learned from the way very tall trees make it work here on earth.

Some redwoods have lived since the days of Jesus Christ. With time, their immense, complex canopies trap needles, dust and seeds, creating peaty soil mats a yard thick and as big as a bus that grow plants, sustain animals and absorb water hundreds of feet above the ground.

"Eventually, you get this huge sponge that builds up," said Steve Sillett, a Humboldt State professor who began studying the phenomena in redwoods in 1996. "During most of the year, it's an aquatic environment up there" fed by rain and fog.

He's discovered mollusks, crustaceans and other animals ordinarily found in stream beds -- even the wandering salamander, which lacks lungs and must stay moist to absorb oxygen through its skin.

Like trees in the Pacific Northwest and other temperate rain forests and cloud forests, the redwoods sprout canopy roots from their branches that Sillett believes take in water and nutrients from the hidden gardens.

Effectively the trees create their own little gardens high up in the canopy and sprout canopy roots or adventitious roots to collect water and nutrients.

Another path or even a combined approach might be the use of aerial roots:

Aerial roots: roots entirely above the ground, such as in ivy (Hedera) or in epiphytic orchids. Many aerial roots, are used to receive water and nutrient intake directly from the air - from fogs, dew or humidity in the air.

Scaling this up to kilometers may be a bit of a stretch, but it does solve the water issue.

Just had a thought on a way to potentially work around the kilometer issue...

What if your trees were partially petrified? As in the inner core of the trees turned to stone by absorbing minerals from the soil. You may think this would mean that your trees would have to be millions of years old, but that may not necessarily be the case:

The rate of petrifaction is not exactly known. In some cases it may be fairly rapid. For example, mine timbers have been partly petrified after a few years' exposure to mineral-laden water. Most petrified wood was formed long ago. For instance, stone logs in Petrified Forest National Park, Arizona, are of the Triassic Period and more than 160,000,000 years old.

Again this is probably stretching a little far, but it may give your trees the added strength they need to grow to the heights your looking for.

Another option may be to have your trees form an interconnected network, like The Great Banyan having branches roots and trunks interconnected may offer some really significant strength advantages. 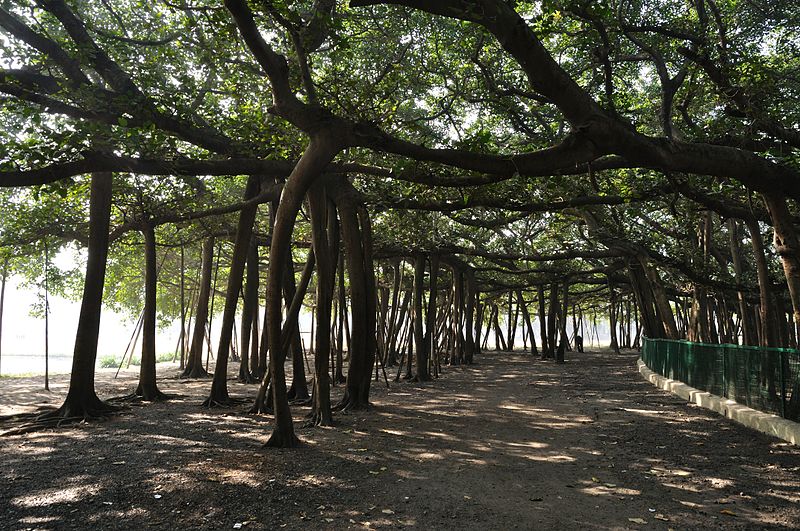 The Long Cosmos by Pratchett/Baxter actually contains chapters (+/- ch 40) where hero climbs a miles high tree in a "forest" of such gargantuan trees.

Trees on that world evolved to embed hydrogen gas in their wood/structure, so their wood is nearly weightless. These trees also use hydrogen gas - filled structures to transport water upward.

Needless to say, fire has rather spectacular consequences on this world.

Not the answer you're looking for? Browse other questions tagged science-based biology environment flora .

5
All conditions being ideal (gravity, ecosystem, etc), what are the physical limits of tree growth on earth?
36
That's no Moon: Planet-sized Plants Possible?
6
How can I achieve 1.5 mile (or even 300 foot) wide tree branches?
10
Interlocking, ultra-high forest, is it possible?
3
The Tree of Youth
9
How tall can trees get if water transport limitations are bypassed?
5
Living on a Giant Tree - Animals
4
How Can I Get Giant Trees on Venus?

9
How would plant control powers/magic work?
7
Circular tree: possible?
8
Could Bamboos Evolve Into Trees In the Past?
6
Tall trees : atmospheric pressure
2
Could Long, Dense Walls of "Megamangroves" Deflect The Deadliest of Storms?
3
Megamangrove Roots--Which Kind of Aerial Roots Would Best Support Their Large Size?
9
What Would it take for Trees with Stone Core to be Self Supporting?
6
How much water could the Crown Chalice hold as it grows on high-up tree branches?
9
How tall can trees get if water transport limitations are bypassed?
4
Could giants fit into a forest?